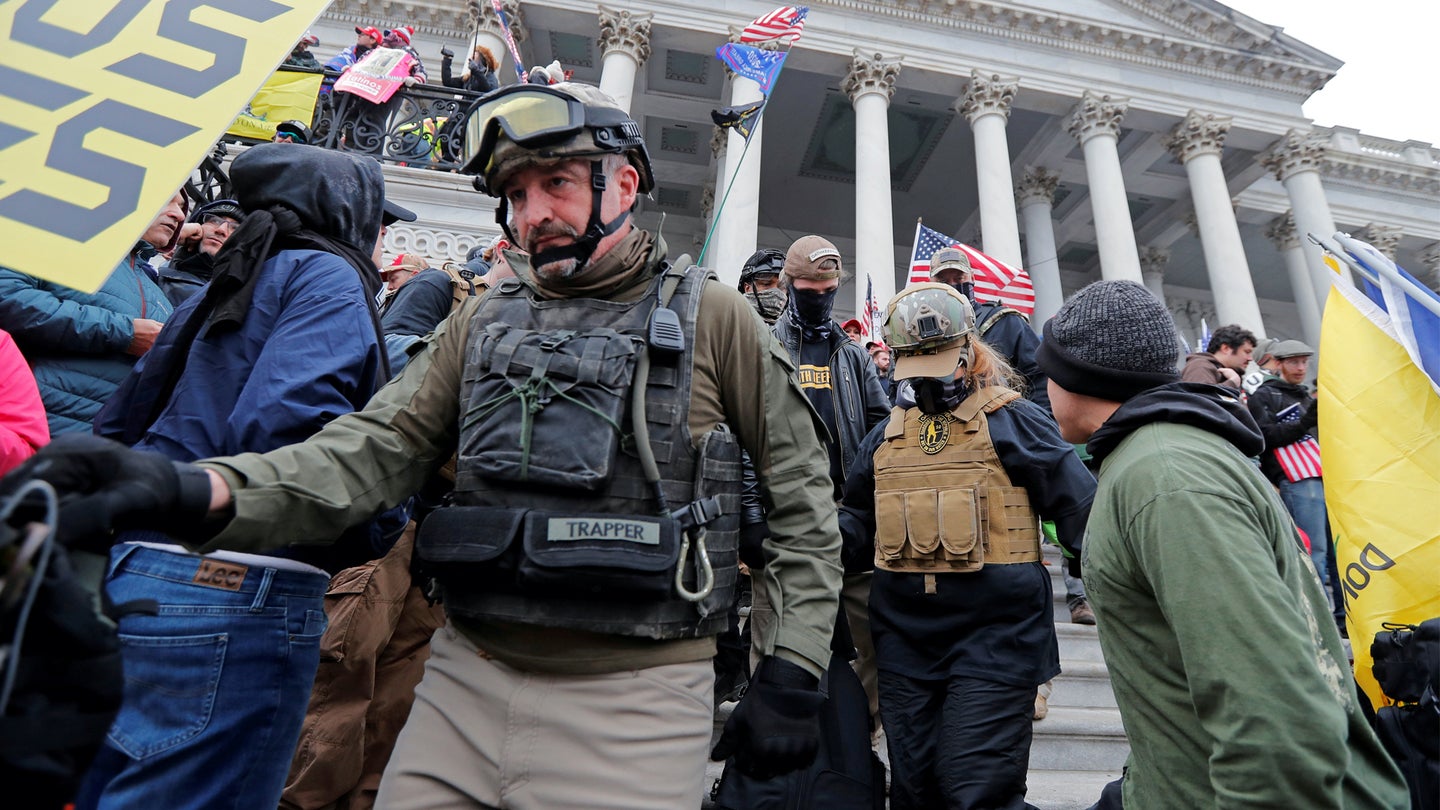 Members of the Oath Keepers, including Marine veteran, Donovan Crowl (foreground, wearing helmet and goggles) are seen among supporters of U.S. President Donald Trump at the U.S. Capitol during a protest against the certification of the 2020 U.S. presidential election results by the U.S. Congress, in Washington, U.S., January 6, 2021. (REUTERS/Jim Bourg).
SHARE

Among the pro-Trump rioters who stormed the U.S. Capitol building last week was a Marine veteran and member of an anti-government extremist group named Donovan R. Crowl.

In a drunken phone call with New Yorker reporter Ronan Farrow, Crowl, 50, said he had gone to Washington to “do security for V.I.P.s” whom he declined to name. He said his intentions had never been violent, and that “we protected the fucking Capitol Hill police,” though he declined to substantiate that claim, Farrow reported.

Crowl, who served in the Marine Corps from 1988 to 1993, was identified wearing a combat helmet, ballistic goggles, and a tactical vest with a handheld radio, The New Yorker reported. He joined a line of people breaching the doors of the Capitol and then was photographed in the Capitol Rotunda, where he appeared to stand guard at the doors and on the steps of the Capitol, The New Yorker reported.

A helicopter airframe mechanic, Crowl served in the Persian Gulf in Sept. 1990, a Marine official told Task & Purpose on Thursday. Crowl left the Corps in March 1993 as a corporal, though the official declined to specify the type of discharge he received due to privacy restrictions.

The New Yorker reported on Thursday that Crowl left the Marines after encountering health issues. When he left he struggled with addiction and held occasional jobs in construction.

The veteran’s sister, mother and friend told The New Yorker that he became increasingly radical in his support of President Donald Trump and his racist views in recent years. “The only good Black person is a dead Black person,” Crowl’s mother recalled her son saying, though with a racial epithet, according to The New Yorker. “I’m sitting here sick to my stomach,” she said after the riots last week.

Crowl’s sister reported that her brother embraced conspiracy theories espoused by radio host Alex Jones and other “echo chambers on the Internet,” the New Yorker reported her saying. “I fear him,” she added, citing his knowledge of firearms.

Crowl admitted to Farrow that he was a member of the anti-government extremist groups The Oath Keepers and the Ohio State Regular Militia, Farrow reported. According to the Anti-Defamation League, a human rights group, the Oath Keepers believe the U.S. is part of a worldwide conspiracy to enslave Americans, first by taking away the right to keep and bear arms. Several members of the group have been arrested on weapons-related charges. In 2010, Matthew Fairfield, president of an Ohio chapter, was convicted of possessing dangerous ordnance, including a live napalm bomb, and of pandering obscenity involving child pornography.

“[Crowl] repeatedly denied that he harbored racist views or had made racist comments, but he said that he believed in phrenology, the discredited pseudoscience that infers intellectual ability from skull shape, and told me that he had responded to The New Yorker’s request for comment after examining pictures of my head.”

Crowl joins a growing line of veterans and active-duty service members who have been identified as taking part in the riots inside the Capitol building. Others include Air Force veteran Ashli Babbitt, who was shot by Capitol Hill Police while trying to enter the Speaker’s Lobby, a hallway that would have given her and other rioters access to the House chamber, The Washington Post reported; Retired Air Force Lt. Col. Larry Rendell Brock, who was arrested in Texas after entering the Senate chamber without authority; Navy veteran Jacob Anthony Angeli Chansley, the so-called ‘Q Shaman’ who was kicked out of the Navy after two years for refusing to take an anthrax vaccine; Jacob Fracker, a former Marine and a current infantryman with the Virginia National Guard; and Thomas Robertson, an Army veteran, who were arrested in Virginia on Wednesday.

The Navy’s Criminal Investigative Service is investigating to see if more sailors or Marines took part in the riot, the Marine official said.

Featured image: Members of the Oath Keepers, including Marine veteran, Donovan Crowl (foreground, wearing helmet and goggles) are seen among supporters of U.S. President Donald Trump at the U.S. Capitol during a protest against the certification of the 2020 U.S. presidential election results by the U.S. Congress, in Washington, U.S., January 6, 2021. (REUTERS/Jim Bourg)

Related: The Capitol Hill insurrection reveals veterans are at war against themselves