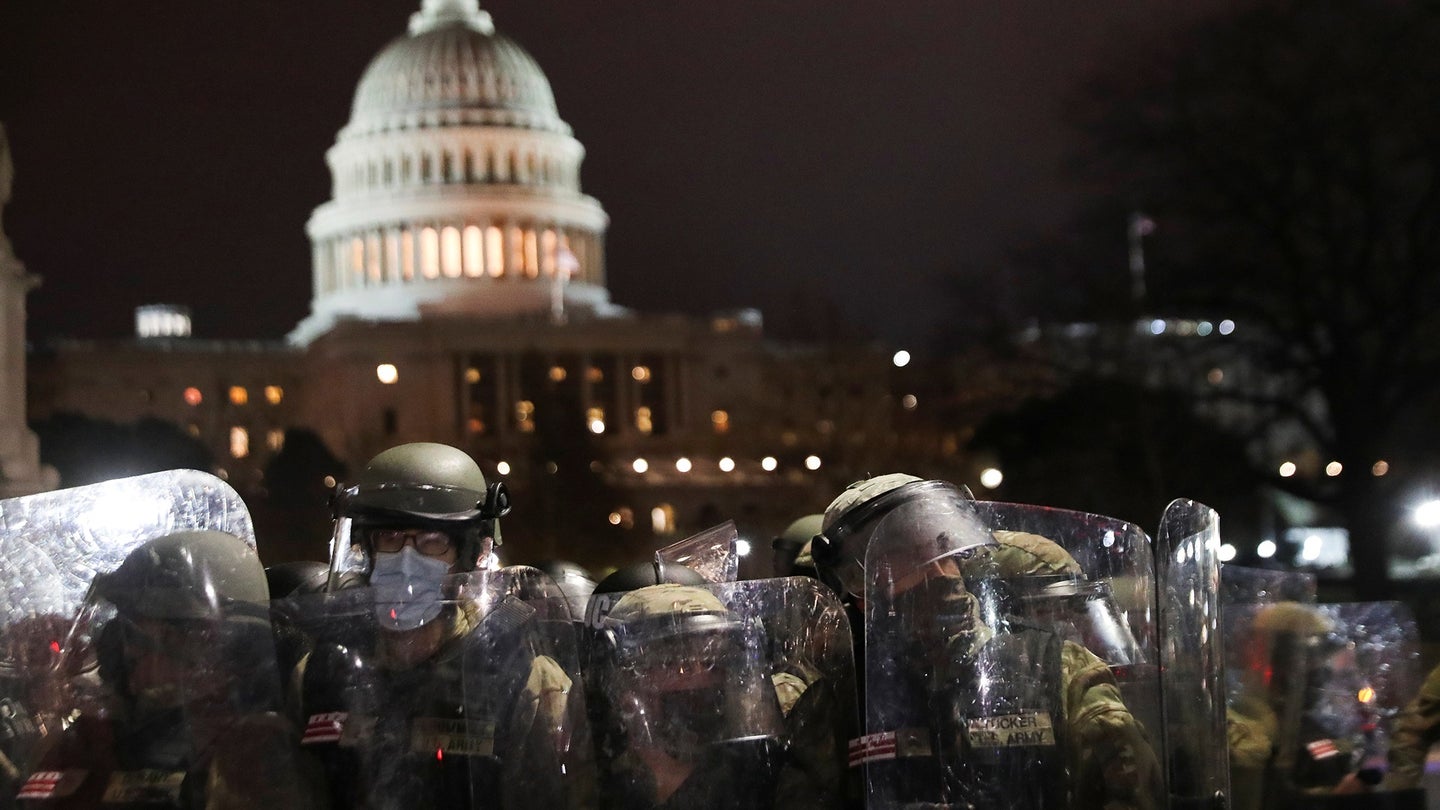 Members of the National Guard stand guard as supporters of U.S. President Donald Trump gather outside the U.S. Capitol building during a protest against the certification of the 2020 U.S. presidential election results by the U.S. Congress, in Washington, U.S., January 6, 2021.REUTERS/Leah Millis.
SHARE

A retired Air Force Reserve lieutenant colonel who was seen in pictures of insurrectionists storming the Senate floor on Jan. 6 has been charged by federal authorities, according to the Justice Department.

Larry Rendell Brock was arrested on Sunday in Texas, the U.S. Attorney’s Office for the District of Columbia has announced. Brock faces charges of violent entry and disorderly conduct on Capitol Grounds as well entering or remaining in any restricted building or grounds without lawful authority.

“It is alleged that Brock was identified as one of the individuals who unlawfully entered the U.S. Capitol wearing a green helmet, green tactical vest with patches, black and camo jacket, and beige pants holding a white flex cuff, which is used by law enforcement to restrain and/or detain subjects,” a U.S. Attorney’s Office news release says.

Again, know if our notification to the FBI played a role yet. But very proud. https://t.co/s96LDZmH4J pic.twitter.com/3i5E8R6KE1

A former A-10 pilot, Brock began active-duty in 1989 and joined the Air Force Reserve nine years later, said Air Force spokeswoman Ann Stefanek. He served as an A-10 pilot until 2007 and then retired in 2014 as an admissions liaison officer.

Since Brock is now a private citizen, the Air Force has no jurisdiction over him, Stefanek said.

Cyber security researcher John Scott-Railton was first to identify Brock from pictures of insurgents who had made their way onto the Senate floor on Jan. 6. Ronan Farrow of The New Yorker interviewed Brock, who confirmed that he is the man in the pictures.

“The President asked for his supporters to be there to attend, and I felt like it was important, because of how much I love this country, to actually be there,” Brock told Farrow.

In a picture posted on social media by Scott-Railton, Brock can be seen holding flex cuffs. But Brock told Farrow that he found the restraints inside the Capitol building and was merely holding onto them until he could give them to a police officer.

“I didn’t do that because I had put them in my coat, and I honestly forgot about them,” Brock claimed in his interview with Farrow.