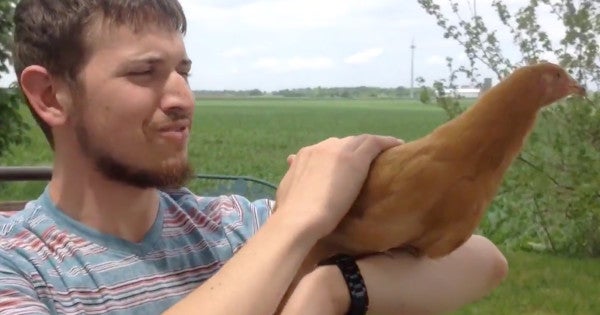 A disabled Marine named Luke Villotti was recently profiled by the Chicago Tribune, which reported on the ongoing dispute with neighbors over his having 20 chickens in the backyard. The neighbors are annoyed, but the 25-year-old has a letter from his Department of Veterans Affairs counselor saying that chickens can indeed be considered “support animals.”

“They are very therapeutic,” Luke Vilotti told the Chicago Tribune. “They take care of us and we take care of them.”

I watched the video of him petting a chicken and talking about it as if it were a dog. I love my dogs, but I can't say I really understand the idea of a chicken as taking on a similar role. But who the hell am I to judge?

Read the full story, and then let me know your thoughts in the comments.