For his free meal on Veterans Day, Ernest Walker picked the Chili's Grill & Bar in Cedar Hill. The 47-year-old... 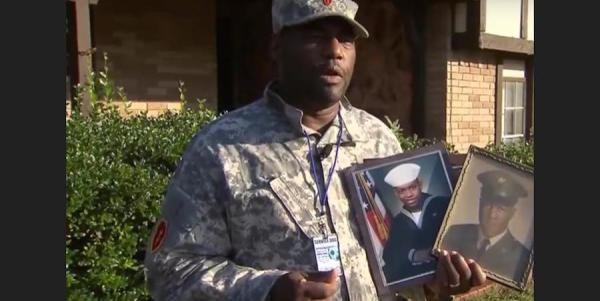 For his free meal on Veterans Day, Ernest Walker picked the Chili's Grill & Bar in Cedar Hill. The 47-year-old sat at a table and ordered a burger while his service dog, Barack, waited by his side.

Chili's is apologizing for what happened next.

As Walker tells it, an elderly white man wearing a Donald Trump shirt approached him and said that he was in Germany and that blacks weren't allowed to serve there. Walker, who is black, says he was wearing his old Army uniform.

The man walked to the back of the restaurant, Walker says, and a waitress came to pack his leftovers. Then a manager showed up.

In a widely shared Facebook post, Walker wrote that the manager claimed another guest said Walker was not “a real soldier” because he was wearing his hat indoors. Walker said he provided a military ID at the manager's request, along with his discharge papers.

“The guest also said your dog is not a service dog,” Walker says the manager told him.

That's when Walker says he turned his cellphone camera on.

“Barack had his red service vest on, and his certified service tags,” Walker wrote. “I was sitting for 35 minutes prior with Barack beforehand. At this point I was grossly offended, embarrassed dehumanized and started recording.”

The video shows Walker arguing with the manager about whether he has seen Walker's military information. The manager grabs his leftovers as Walker talks over him.

“You have a great day,” the manager says before walking away with the to-go box.

“Yes, I did just provide documents for you, and they saw you,” Walker replies.

The manager couldn't be reached for comment Sunday. He has been put on leave, KXAS-TV (NBC5) reports.

One of Walker's attorneys, Kim Cole, said in an email that officials with Chili's and its parent company, Brinker International, apologized to Walker via phone Monday.

Chili's president Kelli Valade said in a prepared statement that the restaurant immediately removed the manager.

“On a day where we served more than 200,000 free meals as a small gesture of our appreciation for our veterans and active military for their service, we fell short,” Valade said.

Walker said he was stationed in Hawaii in the 25th Infantry Division during the late 1980s. He showed his discharge form to an NBC5 reporter at a press conference Sunday.

Walker blames the reaction of the Chili's manager to the prodding of the Trump supporter.

“I do believe that the election has changed the hearts and changed the motives of people so much so that he believed in his heart and mind after talking to the Trump supporter that I was stealing food,” Walker said.

Federal law defines service animals as those that have been individually trained to assist a person with a disability, regardless of whether they have been certified or licensed by a state or local government. Restaurants that ban pets are required to allow service animals.

Though service dogs usually wear special tags or gear, sometimes they're not obvious. In that case, the U.S. Department of Justice tells businesses that they may ask a customer two specific questions: Is the dog a service animal required because of a disability? What work or task has the dog been trained to perform?

Federal rules prohibit businesses from asking customers about the nature of their disability or demanding documentation for the service animal.

Cedar Hill Mayor Rob Franke said in a prepared statement that the incident at Chili's “is not what we are about.”

“My concern for the veteran is paramount, but we must also consider the manager and how he can become a better person and perhaps do better the next time he is put in a difficult situation,” Franke said. “People do best and learn the most from experience. To learn requires patience and grace, neither of which can occur in the heat of emotion, demonstration, and anger.”