There are always differences between service members’ experiences. You’ve got soldiers, Marines, airmen, sailors, and coasties; grunts and POGs; officers... 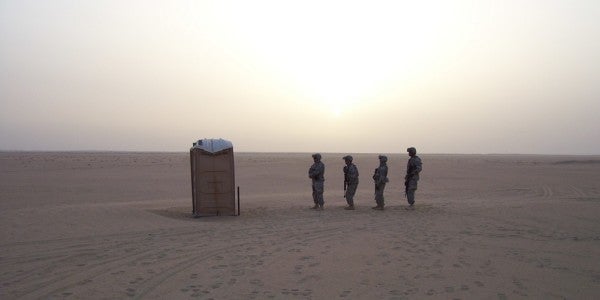 Who ever thought dropping a deuce would become an occasion for Olympic-level physical strain? Between holding a squat over the excrement Everest rising below the seat and straining to take a dump in this sweltering crap-sauna while trying not to get lost in the mosaic of dick drawings on the wall, this feat deserves a brownbronze medal, at least.

A model skull and hand waves from the bowl of a toilet resting on the floor of the bridge of the sunken ship “Black Bart” off the coast of Panama City, Fla., May 26, 2016. U.S. Navy photo by Glenn Fawcett.

On dry land, in the sky, or deep below the surface, everybody poops and submariners are no different.Though they have toilets, sometimes the line gets backed up, and when that happens, well, the waste has to go somewhere, like the deep sink in the kitchen. Anyone order a shit-covered entree?