It’s been less than a year since soldiers from 2nd Battalion, 3rd Special Forces Group returned from an Africa deployment.... 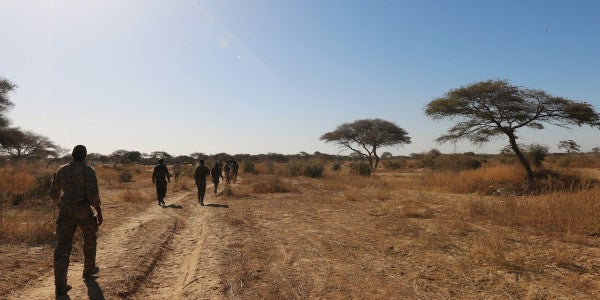 It’s been less than a year since soldiers from 2nd Battalion, 3rd Special Forces Group returned from an Africa deployment.

But in a way, the soldiers have never left.

Lt. Col. David Painter, who led the soldiers on that deployment and will take them back to Africa later this year, said that two years after 3rd Special Forces Group reclaimed its historic African mission, the Bush Hogs — like their counterparts across 3rd Group — are “all in.”

At the 3rd Group headquarters on Fort Bragg last month, Painter described a unity of effort across the group — commanded by Col. Bradley D. Moses — and between the battalions, who are rotating command of a lieutenant colonel-level command based in North and West Africa.

The Special Forces teams set to deploy this year did not put their mission aside on their return to Fort Bragg, Painter said. Instead, the teams have kept in touch with their counterparts in Africa knowing that many would return to the same countries in which they’ve previously deployed.

Teams deployed and at Fort Bragg speak constantly, he said. In some cases, nearly daily. It’s not uncommon for soldiers in Africa to reach back to home for solutions to problems facing their partner forces.

“We truly are a learning organization that is constantly adapting without suffering amnesia,” he said.

In that way, the 3rd Group hopes to maintain momentum across deployments, gaining from the experiences of other battalions and teams to become more efficient.

“We want to be effective with our time and people,” Painter said. “It’s a constant state of learning throughout the year. You stay connected.”

A little more than two years ago — on the 25th anniversary of 3rd Group’s reactivation at Fort Bragg in July 1990 — officials announced that after more than a decade-and-a-half of service in Afghanistan the group would return to its historical mission in Africa.

In Afghanistan, 3rd Group had done much of the heavy lifting for Special Forces, working closely with their Afghan counterparts, building their capacity and maintaining a constant presence in the embattled country while helping to steer the course of the war.

No other Special Forces Group spent more time in the country.

By 2015, the unit’s most seasoned soldiers had multiple deployments to Afghanistan totaling years of service and expertise. Few, other than some senior leaders, had any experience in Africa.

As part of 3rd Group’s “refocus,” soldiers underwent a crash course of sorts about the new, old mission.

There were briefings from military commands, the Department of State and U.S. AID, among others. Soldiers learned how to navigate the bureaucracy of the continent and specific concerns for the 12-nation swath of Africa that includes Libya, Chad, Cameroon, Nigeria, Niger, Algeria, Tunisia, Morocco, Mauritania, Senegal, Mali and Burkina Faso.

In Africa, the soldiers would find a very different mission than what they were used to in Afghanistan.

Each country has its unique problems. The continent is more diverse culturally, economically and geographically. And at the same time, there are broader issues than what many Special Forces teams have dealt with in Afghanistan.

In addition to a terrorism threat from groups like Boko Haram, al-Qaida and the Islamic State, the soldiers have also helped local partners tackle problems with poaching, illegal drugs and human trafficking.

Painter is a “homegrown” officer within the 2nd Battalion, having spent much of his career within the unit. He took over command of the battalion just as the 3rd Special Forces Group began its transition to Africa.

He said that while the group’s geographic focus has changed, that has not required a total overhaul of the skills Special Forces soldiers have long been trained on or what they’ve done for the past 16 years in Afghanistan.

Leaders within 3rd Group have said the return to Africa has represented a return to the “bread and better of what Special Forces do” — namely working with and through partner forces to build security in allied countries.

“It’s wildly different,” Painter said of the Africa mission compared to what troops have been doing in Afghanistan. “Is it a mission we’re trained for? It absolutely is.”

Painter said Special Forces soldiers are trained, from the beginning of their careers in special operations, to operate in ambiguous environments.

The Africa mission mirrors some of that early training. Special Forces teams work closely with partners from other U.S. government agencies and with allies on the continent under a simple premise.

“How do we help these different Africa countries work through the problem sets they're faced with in this day and age?” Painter said. “We are there to not solve their problems for them, but to help them work through those problems.”

The mission comes with unique challenges.

Soldiers are often based much farther away from important support, including medical care. They are working in austere environments.

Training in recent years has been designed to close that care gap, giving Special Forces teams additional capabilities to provide care when outside help is far away.

At the same time, soldiers have continued to prepare for some of the same dangers they would have faced in Afghanistan, including roadside bombs.

“It can potentially be equally as dangerous but much less known,” Painter said of working in Africa.

Quoting Brig. Gen. Donald Bolduc, commander of Special Operations Command-Africa, Painter said “The U.S. is not at war in Africa, but make no mistake, the Africans are in many places.”

One of the biggest difference comes with who the soldiers are working with.

In Afghanistan, soldiers had clear authorities — left and right boundaries of what they could and couldn't do with their Afghan partners.

But in Africa, the soldiers are working under multiple authorities and permissions while coordinating with the U.S. State Department and other government entities across numerous countries to achieve regional effects.

Despite a tall learning curve, Painter said he couldn't be prouder of his soldiers.

“None of these are easy missions,” he said.

On the battalion's last deployment, Painter said a Special Forces team traveling with U.S. government officials in Mauritania proved their readiness when their partners were involved in a vehicle accident.

The Special Forces team, traveling directly behind the vehicle that crashed, acted quickly to save the lives of the American officials traveling with them.

One of the officials needed a blood transfusion and a Special Forces medic on the scene was able to do one on the spot.

Were it not for the help, Painter said the woman would have likely died.

“You can't make that up,” he said. “It's powerful. They're very well-trained.”

Painter said the soldiers are looking to make real progress in Africa.

“Their time needs to be worth it,” he said. “We're not sending guys over to just get a deployment.”

The most important tool in the Special Forces arsenal are the soldiers themselves, Painter said. And their unique training is needed throughout the world.

“We have limited precious assets,” he said. “There's more demands than we have people to meet them.”

As the battalion prepares for its next deployment, Painter said we wants to make sure soldiers don't change the goal line.

The 3rd Special Forces Group is looking for innovative ways to help its partners, he said. But that support has to be manageable and sustainable long after the Special Forces soldiers are gone.

“We're there to help them build a solution,” Painter said. “It takes a different mindset.”

To be successful, the soldiers would need buy-in, not only from their host nation partners, but from their American partners in country.

“Generally, we have had very positive support from country teams,” Painter said. “We need that.”

Without it, the mission won’t see any long-term success. But with it, 3rd Group soldiers can have a lasting impact.

“I'm very proud to be in a position where I can work and be a part of what I honestly believe is a collective approach in so many different countries,” Painter said.