UNSUNG HEROES: The Most Decorated Combat Cameraman Of The War On Terror

On April 6, 2008, Army Spc. Michael Carter, a combat cameraman, was nearing the end of a yearlong tour in... 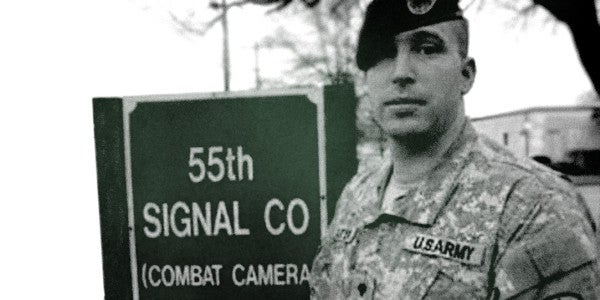 On April 6, 2008, Army Spc. Michael Carter, a combat cameraman, was nearing the end of a yearlong tour in Afghanistan.

Chinooks dropped them in the valley, and they began a grueling two-mile trek alongside a fast-flowing river, moving toward higher ground. Everything was going according to plan until they were met by insurgent fire — a massive ambush.

As they were scaling the cliff, the unit’s interpreter was shot point blank. The original mission was to fight the group from above, but they began taking fire during the ascent, which turned into a fight that would last seven hours.

“We hit one terrace and started contact. My camera was in my bag, so I pulled my rifle and started shooting at movement,” Carter told Army Times. “Rounds starting popping around me and I climbed to the next level and ran for cover where the captain and the were at. It was a nook inside the mountain wall, like half a bubble.”

According to his citation, Carter “returned fire on insurgent locations, exposing himself to an intense volume of fire while killing multiple insurgent fighters and providing suppressive fire as the … Commander recovered the body of their dead interpreter.”

With complete disregard for his safety, Carter left cover to provide suppressive fire and recover an injured detachment member, on whom he performed administered life-saving aid.

For his actions that day, Carter was awarded the Silver Star, which makes him the first soldier with the military occupational specialty of combat documentation and production specialist to be awarded the Army’s third-highest award for valor.

“That day Carter was not a combat cameraman, that day Carter was a Green Beret. He acted that way on the ground and that’s why I put him in for the award,” Capt. Kyle Walton, mission commander and commander of Operational Detachment Alpha 3336, told Army Times.