By the time Capt. Jeremiah “Bull” Parvin and 1st Lt. Aaron Cavazos arrived over the Afghanistan battlefield on Oct. 28,... 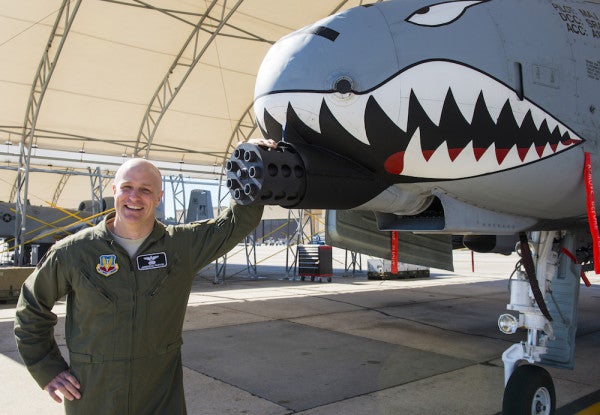 By the time Capt. Jeremiah “Bull” Parvin and 1st Lt. Aaron Cavazos arrived over the Afghanistan battlefield on Oct. 28, 2008, six special operations Marines cut off from the rest of their unit had been fighting off 50 to 60 insurgents for two hours in close-quarters combat. They had not received close air support because F-18s on scene were unable or unwilling to fly beneath low cloud cover, according to Military.com.

Despite having no adequate maps to help guide them through the narrow four-mile wide valley, Parvin and Cavazos descended below the clouds to join the fight.

“We just kind of picked our best access to get down there and hoped for the best, and this is also happening at twilight, so this also made it pretty difficult as well. But we did both make it down there, and once we got underneath the weather there was more of a firefight than I ever expected to see in Afghanistan,” Cavazos recounted in a video featured on Military.com.

The pilots turned on the exterior lights of their aircraft, intentionally presenting a visible target for the insurgents in order to draw their fire away from the Marines, reported the Air Force Times. With the help of enemy coordinates relayed by the joint terminal attack controller and infrared strobe lights to mark the Marines’ position, Parvin and Cavazos were able to make multiple deadly strafing runs. Their accuracy was crucial, as they effectively targeted enemy positions as close as 20 meters from the Marines.

During the course of the engagement, the A-10 Warthogs flew as low as 400 feet above the ridge lines. “I would have rather hit the mountain and at least try to save them versus fly above the weather and listen to them fight and die on the radio,” Cavazos said in an interview with Air Force Times.

Before the A-10s arrived, the Marines were surrounded with nowhere left to retreat. They had suffered two wounded and were taking fire from immediately outside the windows of the house they were holed up in, and even from an inside hallway. The house itself had caught fire.

Thanks to the air cover, the Marines were able to withdraw from the house back to the safety of their base. Running low on ammunition, Parvin and Cavazos continued to fire enough well-placed rounds to slow the enemy’s pursuit. By the end of their eight-hour mission, there were only 100 rounds remaining in Parvin’s A-10 out of 1,350, he told Air Force Times.

The Air Force awarded both pilots the Distinguished Flying Cross with Valor in January.

“You hear gunshots in the background; you hear screams of urgency in their voices,” Parvin was quoted saying in an Air Force news release. “You could just tell they need help and they need it now.”

Parvin’s assessment was spot on, according to one Marine on the ground. “It was the first time in my life that I thought to myself, ‘This is it, we’re going to die, we’re not going to make it out of this,” Master Gunnery Sgt. Richard Wells said at the medal ceremony for Parvin. “I don’t think I’d be doing this interview right now. I’m certain that I wouldn’t have made it out.’”