One of the most iconic pieces of equipment worn by American service members is the combat helmet. From the flat-brimmed... 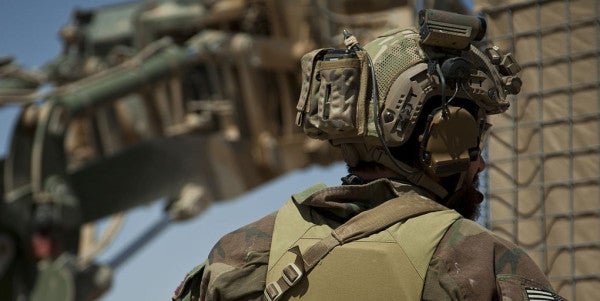 One of the most iconic pieces of equipment worn by American service members is the combat helmet. From the flat-brimmed “Brodie” M1917 helmet worn by doughboys in World War I, to the M1 “Steel Pot” that troops wore throughout World War II, Korea, and Vietnam, helmets have come to represent American troops at war. Historically, these helmets have mainly been about protection against bumps, exploding shrapnel, and debris; until recently, helmets were not even rated to stop handgun bullets consistently. But in the past 15 years, helmets have evolved far past simple protection.

At the turn of the millennium, the standard issue battlefield protection gear was the Personal Armor System for Ground Troops, which consisted of an armored vest and helmet. The helmet was referred to by troops as simply a “Kevlar,” for its use of the aramid fiber that provided the ballistic protection. While the PAGST helmet offered better protection than the previous M1 helmet, it was unpopular with troops. In a study of soldier satisfaction with the PAGST helmet, the Army found out how dissatisfied they were: “Only 30% of PASGT users were satisfied with their helmet’s maintainability, and 15% were satisfied with its fit. Less than 10% of PASGT users were satisfied with their helmet’s comfort, weight, and overall impression.” They criticised the poor chinstrap design, padding, and overall fit; these issues, coupled with the distinctive brim of the helmet, led to problems with the PAGST helmet tilting forward, an annoyance when trying to do certain critical tasks such as casualty care or shooting from the prone. It became clear that an updated helmet was needed.

In early 2000s, special operations forces began to use a helmet called the Modular Integrated Communications Helmet, commonly referred to as the MICH. The MICH’s design allowed over-ear communications headsets to be worn more comfortably under the helmet; it also offered reduced weight, improved fit, and more effective protection against handgun rounds. There were three versions of the MICH offering different levels of side coverage versus communications capability. The Army developed an improved version of the MICH-2000 design called the Advanced Combat Helmet, and began fielding it in 2003. The tradeoff was an 8% overall reduction in coverage compared to the previous PASGT helmet. The Marine Corps diverged from the Army and adopted the Lightweight Helmet, which featured the improved materials of the ACH, but retained the overall profile of the old PASGT helmet. The MICH, ACH, and Lightweight Helmet all more readily accommodated the mounting of night-vision devices, which were becoming increasingly ubiquitous among American forces in the Global War on Terror signaled that helmets were becoming an modular equipment platform unto themselves

That concept would be realized when a company called Ops-Core developed its flagship product, the Future Assault Shell Technology, or FAST, helmet. Designed for special operations forces, it featured an integrated mount for night vision, as well as built-in retention lanyards for any night-vision devices. More significantly, along the rim of each side of the helmet was a mounting platform for accessories. The wearer could mount task lights, hearing protection, communication accessories, face protection, oxygen systems, video cameras, and numerous other devices. The FAST helmet came with pre-applied Velcro, which had become popular for mounting callsign and infrared identifiers. Rounding out the design was a new dial-based liner and strap system, which made adjusting the fit significantly easier. Despite being 30% lighter, the FAST still exceed the ballistic protection requirements of the ACH. The helmet quickly became popular with special operations forces, seeing use with units like the 75th Ranger Regiment, Naval Special Warfare, Marine Special Operations Command, and the Air Force special operations community. Ops-Core also developed accessory rails for the existing MICH and ACH designs. Other designs would follow the modular design trend, with the Crye Precision Airframe and the Team Wendy Exfil being two popular competitors. These helmets started to spread outside the special operations realm, with the armies of Norway and Australia adopting the Ops-Core and Crye helmets.

Now that there are dozens of accessories now available to trick out a helmet with, the old problem of weight has resurfaced. Some of the latest night-vision devices require external battery packs or counterweights. Several companies have developed applique armor in order to provide increased protection against direct hits from rifle rounds, and that certainly adds more weight. The good news is that the increased pace of helmet research and development has spurred on new breakthroughs. A company called MTEK Weapon Systems has developed a helmet that provides more protection than the ACH at only 1.9 pounds of weight. The development of blast gauges enables designers to test the performance of their helmets, and help reduce the chance of traumatic brain injuries.

The future for combat helmets contains many possibilities. Obviously, protection will remain the primary function of any helmet, but programs like Special Operations Command’s TALOS Suit envision life support and communication systems being built into the helmet itself. What is certain is that, like its predecessors, the future combat helmet of the U.S. military will not just be a piece of gear; it will be a symbol of a future war and the American service members who fight those wars.