YouTube — ground zero for cute cat videos and home to some of the world’s most entertaining firearms enthusiasts —... 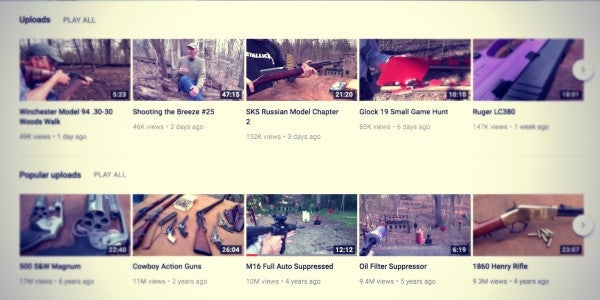 YouTube — ground zero for cute cat videos and home to some of the world’s most entertaining firearms enthusiasts — made a major announcement on Tuesday: Some of your gun vlogs have to go.

A new update to the Google-owned video platform’s content policy prohibits any video that “intends to sell firearms or certain firearms accessories through direct sale.” Those accessories explicitly include high-capacity magazines or anything that could “enable a firearm to simulate” or “convert a firearm to” automatic fire, from bump stocks to DIY conversion kits.

But the new policy doesn’t just prohibit commercial sales: It flags anything that could be interpreted as instructions on installing or “manufacturing a firearm, ammunition, high capacity magazine, homemade silencers/suppressors… and instructions on how to convert a firearm to automatic or simulated automatic firing capabilities.”

Related: This Site Lets You Buy All The Ammo You Want Online »

Guns rights advocates were incensed by the sudden change. “We suspect it will be interpreted to block much more content than the stated goal of firearms and certain accessory sales,” the National Shooting Sports Foundation said in a statement. “We see the real potential for the blocking of educational content that serves instructional, skill-building and even safety purposes. Much like Facebook, YouTube now acts as a virtual public square. The exercise of what amounts to censorship, then, can legitimately be viewed as the stifling of commercial free speech.”

But beyond claims of “censorship,” Guns.com reports that the regular gun vloggers in particular — folks who dedicate their time to exploring every engineering and historical facet of a firearm (and their use, an essential educational supplement for those who don’t always have access to formal training) — are worried that the new policy would “effectively shut down all gun pages,” as NFA Review Channel put it in a Facebook post.

Oh, you thought I was kidding? Fuck you.Pornhub

Even beyond active content moderation by YouTube, gun vloggers say the new policy won’t just deprive the average American of entertaining (and educational!) content, but effectively cuts video revenue out from under them. Indeed, my own personal favorite, Hickok45, counts a full-auto suppressed M16 among its top videos, with 10 million views. Anyone with at least a passing understanding of digital media knows that the ad dollars from those mega-popular videos help fund other projects.