Your Favorite Drunk Barracks Stories Are Now On YouTube

If you’ve ever wondered what “Drunk History” would be like if veterans hosted it, now you have your answer. A... 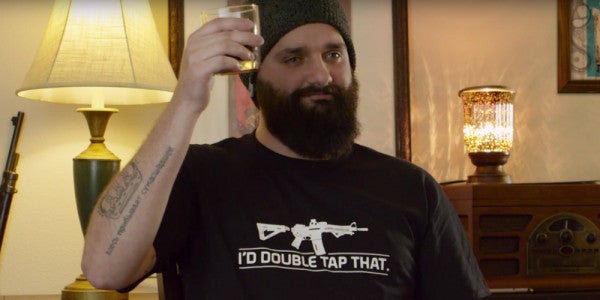 If you’ve ever wondered what “Drunk History” would be like if veterans hosted it, now you have your answer.

In the most recent episode, Denman recounts how for 12 months, Walker was unable to conduct a single correct radio check during their deployment, even with a call sign as simple to remember as “Falcon 1.”

Based on Denman’s actual experiences, the videos are a nostalgic tribute to the days of drunken deployment stories at the barracks.

Drunken Debrief is the production and creative half of the veteran-owned merchandise company Double Tap Gear, both of which launched on April 11, explained the founders, Justin Ennis and Eli Cuevas. Both veterans, the two served together as infantrymen when they deployed to Iraq from 2007–2008 during the troop surge.

The idea for Drunken Debrief, and subsequently the apparel company, came about while Cuevas was working at RocketJump. While discussing a pitch about video games, a friend suggested telling drunk video game stories.

“The next day, when I woke up, I was like, ‘I’m a fucking idiot,’ why not do a drunken debrief, and have vets drink and tell stories, because we love doing that,” said Cuevas. “Then I called Ennis and asked, ‘Is this a good idea? Or am I crazy?’”

He wasn’t crazy. It was an awesome idea.

“It’s just good to tell a funny story,” said Ennis. “That’s what we used to do all the time, when we were just hanging out overseas or in the barracks. These are the things we used to laugh about and we would tell these same stories over and over again.”