"It's the stories of the 'heroes' that commit heinous crimes — that brought me to create Military Murder." 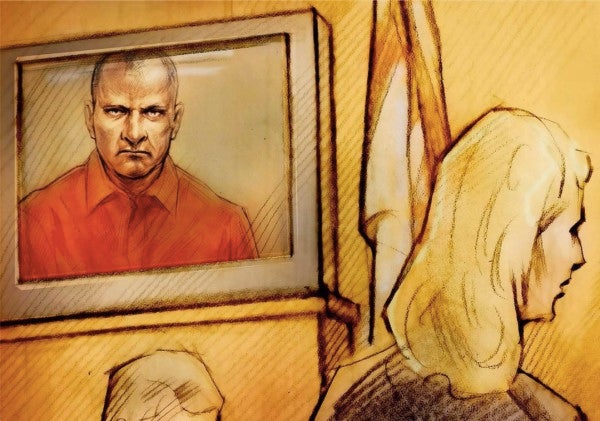 If you need a good podcast to pass the time on your long tedious road trip home for the holidays (or to share with your more bloodthirsty relatives), the new Military Murder Podcast is here for you.

Written, researched and hosted by an anonymous active-duty service member who goes by the pseudonym 'Margot,' the podcast skillfully recounts gruesome murders, mysterious disappearances and other crimes involving military members, veterans, or their families. Each episode is based on a true story, and some of the crimes remain unsolved to this day.

The episodes are 30 to 45 minutes long, and Margot plans to release a new one every Monday. Along the way, she makes listeners feel as if the killer is right around the corner.

“I've always been drawn to the realness of criminal justice and the human emotion of it,” Margot told Task & Purpose. “In telling these stories, especially the military stories, a lot of times we can place ourselves in the shoes of the people in the story.”

There are already more than 250 true crime podcasts out there, Margot said, but Military Murder Podcast is the first to focus specifically on military-related crimes.

“At the end of the day some people are just evil,” she said, “but it's the stories of the 'heroes' that commit heinous crimes — that brought me to create Military Murder.”

Cover art for the one-woman Military Murder Podcast (via militarymurderpocast.com)

Even heroes can act like monsters, and nowhere is that more clear than in the first episode. The story begins with the wife of an Army sergeant having an affair with one of his subordinates, a specialist. The sergeant is a highly-respected soldier, but when he finds out his wife's baby isn't his own, he decapitates the specialist in front of the base DFAC and carries the head back to his wife while she's sitting in the hospital.

In another episode, a case of cat-fishing gone horribly wrong leads to a sailor impersonating an NCIS officer and murdering a Marine in Virginia Beach. Though the murders are brutal, Margot points out that many of them could have been prevented with a little more awareness, or even compassion.

“There were choices all three of those people made, and maybe things could have played out differently,” she said of the decapitation tale from her first episode. “If we know one of our troops is going through a hard time, they may be the best thing since sliced bread, but if they're going through a hard time they may snap, so we've got to be good wingmen or battle buddies for them.”

“It's all about remaining vigilant, being smart and taking care of each other,” she added.

Still, there are other stories on Military Murder Podcast that don't have as much of a moral to them. The second episode is about a Canadian Air Force colonel who, between his duties commanding a major Canadian air base and flying top-level dignitaries around the world, raped and murdered two women —one a fellow airman under his command — and traumatized many more from 2007 to 2010.

That episode had this reporter sleeping with the closet light on for a few nights, but whether or not you scare so easily, it speaks to the storytelling skills of the host.

Margot said she first caught the bug for story-telling in high school, where she performed on the speech and debate team. Though she excelled on the team, Margot didn't rediscover her passion for narration until earlier this year, when a coworker mentioned the story of the Army decapitation to her offhand. A lifelong devotee of true crime shows such as Snapped, Investigation Discovery, and the podcast Serial, Margot researched the incident overnight and shared her findings with the rest of her coworkers the next day.

“They were kinda blown away by the storytelling of it,” she said, and they urged her to start a podcast. Margot's husband then upped the ante by buying her podcast equipment for her birthday this June.

Margot was locked in. She looked up court opinions, read books and news articles and submitted Freedom of Information Act requests about the cases she was working on. The research pays off: not only does each episode retell the story of an outrageous crime, but they explore the nuances of the military criminal justice system and the backstories of the characters.

Margot also draws upon her own experience as a service member to explain aspects of military culture, like the close-knit nature of families living on far-flung bases or the realities of having to move constantly for work.

Each episode takes 30 to 40 hours to research, write and produce, Margot said, and that comes on top of a full-time job and two young toddlers. But somehow she makes it all work.

“Many people watch TV or scroll through the Internet and they always say they don't have time,” she said. “You can make time for what you love.”

The first episode premiered on Veteran's Day, and five more episodes have come out since. Margot hopes to keep rolling with an episode every Monday for as long as she can, but you can help her think of new ones. The podcast website has a case submission form where fans can throw in their suggestions. But avoid submitting conspiracy theories or asking Margot to investigate your case for you, she said.

From now until December 22nd, there is also a giveaway program where listeners can win a Military Murder Podcast challenge coin, a sling bag or even a raglan tshirt if they submit a written review on Apple podcasts or on Stitcher.

Military life is hard, but another perk of Military Murder Podcast is that it makes one really appreciate not getting murdered.

“Even though it's reality, it gives us an escape from our own misery,” Margot said, about the true crime genre. “We sit around moping because 'my boss said this or that.' But I read about the gut-wrenching feeling of losing a child, and I hear these tragic stories, and then I realize my life really isn't so bad.”

“Being a mother and being a wife, it helps me appreciate what I have,” she added.