The old school safety brief you didn’t realize you were missing: ‘I’ll punch you dead in your mouth’

This safety brief is a masterpiece. 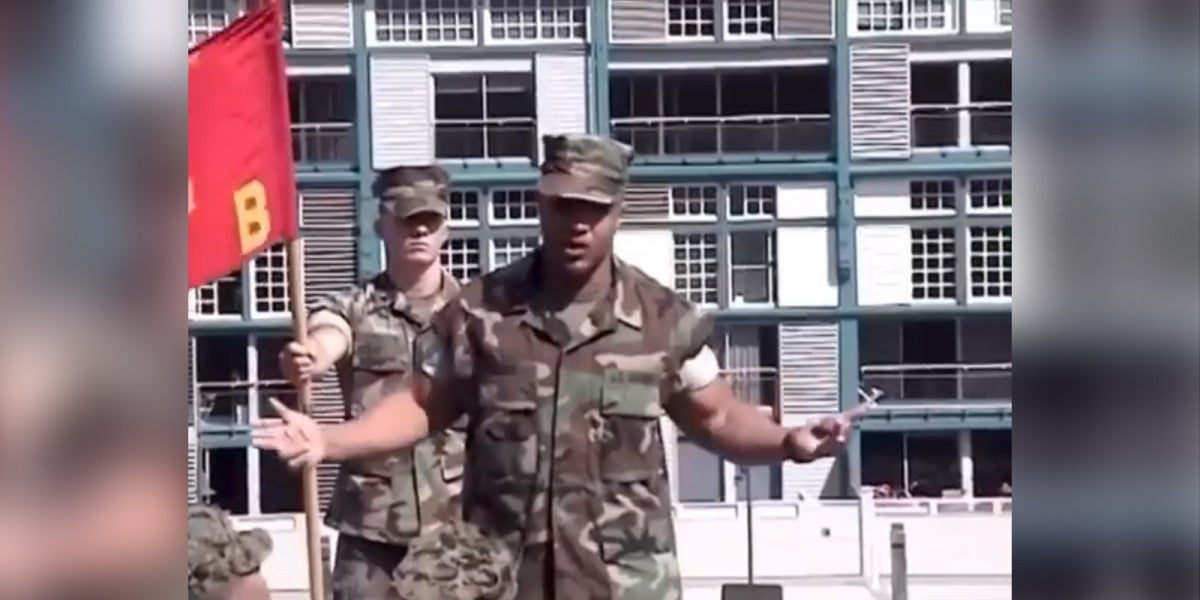 The safety brief, or liberty brief as they’re sometimes called, is a hallmark of military life. The format is generally the same: A senior leader, usually a staff non-commissioned officer, steps in front of a large group, sometimes adopting a twang they didn’t have ten minutes before, and fires off a bunch of advice on why you shouldn’t “drink and [insert poor life choice here].”

And while every branch has its own version of this, in the Marine Corps it’s something else: A spectacle. A beautiful performance — with kernels of truth and real warnings — touched up with a dazzling display of f-bombs and a barrage of “behooves.”

Which leads us to this (obvious profanity warning):

The clip was originally published by Kit Badger on YouTube, and subsequently reshared to Facebook, and later to Twitter, and shows a senior Marine giving a perfectly retro safety brief. (The safety brief occurs at the very beginning of the video.)

According to a blog post by Ivan Loomis, the Marine Corps veteran behind Kit Badger, the video was shot in August 2001 as part of the 15th Marine Expeditionary Unit’s “float tapes” — a video record of the shenanigans troops get up to while out at sea.

The camcorder video kicks off with a gunnery sergeant from 1st Battalion, 1st Marines as he addresses his platoon in spectacular fashion, just before they’re released for liberty in Sidney, Australia:

“Now there’s gonna be some dumbasses again. Go ahead and be the dumbass,” the gunny intones, before making the stakes clear for any Marines who come back late.

“I’ll punch you dead in your mouth,” he says, before adding that “last time… it was the goddamn NCOs fucking up, not the goddamn lance corporals. If you’re told to be back at a certain time, bring your punk-ass here. You set the goddamn policy for where everybody fuck’n is. You know it’s 2300, come back at least 15 minutes prior.”

Now, there’s just something that gets lost when a platoon sergeant tries to deliver a moto safety brief via text — not to mention that the words “I’ll punch you in the mouth if you’re late” are a lot harder to justify and explain when they’re screenshotted and blasted across social media.

At least with an in-person brief, like the one above, you have the laughter of the crowd, which demonstrates that the message was received, as was the humor: “Sure, Gunny may be threatening to crush my balls as if they were a pair of quails eggs if I’m late, but I don’t think he’d do it for real… Still though, I’m not gonna risk it” — those awkward chuckles seem to say.

And to the gunnery sergeant’s credit, he ends on a positive note, encouraging his Marines to go out and enjoy their hard-earned liberty:

So, next time you’re heading into a long weekend and you get an unmotivating text warning you “not to be an idiot,” go ahead and pull up this clip and give yourself a real safety brief.