Soon Every Marine Will Have The Enhanced Combat Helmet 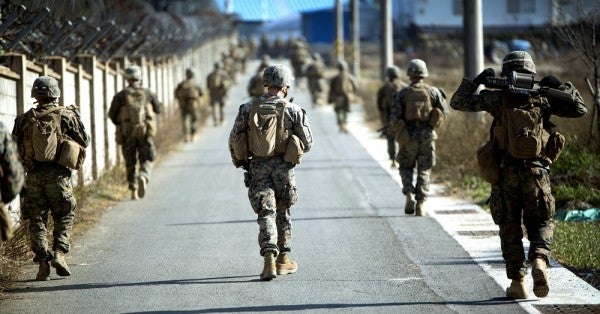 Currently, only Marines shipping out on a deployment are issued the Enhanced Combat Helmet, but the new purchase will see that all Marines are able to use the new headgear during training.

The lightweight helmet, currently used by the Army and the Navy, provides enhanced ballistic protection against some small arms and frag. It consists of a ballistic shell, suspension pads, a four-point strap, and comes with a reversible helmet cover, a bracket for night vision goggles, and attachments for additional hardware and devices.

“Right now, we have three helmets fielded, but the future vision is a single helmet for all operating forces, which greatly simplifies logistics considerations and increases cost savings,” project lead Nick Pierce said in the statement.

The five-year contract award went to the Gentex Corporation in Simpson, Pennsylvania for the company to produce and deliver enough helmets for every Marine — roughly 185,000. Gentex is the same company involved in creating the Army’s new ballistic helmet.

The helmets were tested by the Marine Corps in January, and the first order of 35,424 are expected to hit the fleet for follow-on testing in September 2017. Then, if that goes well, in spring 2018, the I, II, and III Marine Expeditionary Forces will begin receiving the helmets.

“The ECH is the helmet of the future Marine,” Maj. John Draper, the Enhanced Combat Helmet project officer said in the statement. “It’s important for Marines to train with the same gear they will bring into combat.”