This thing is sick. 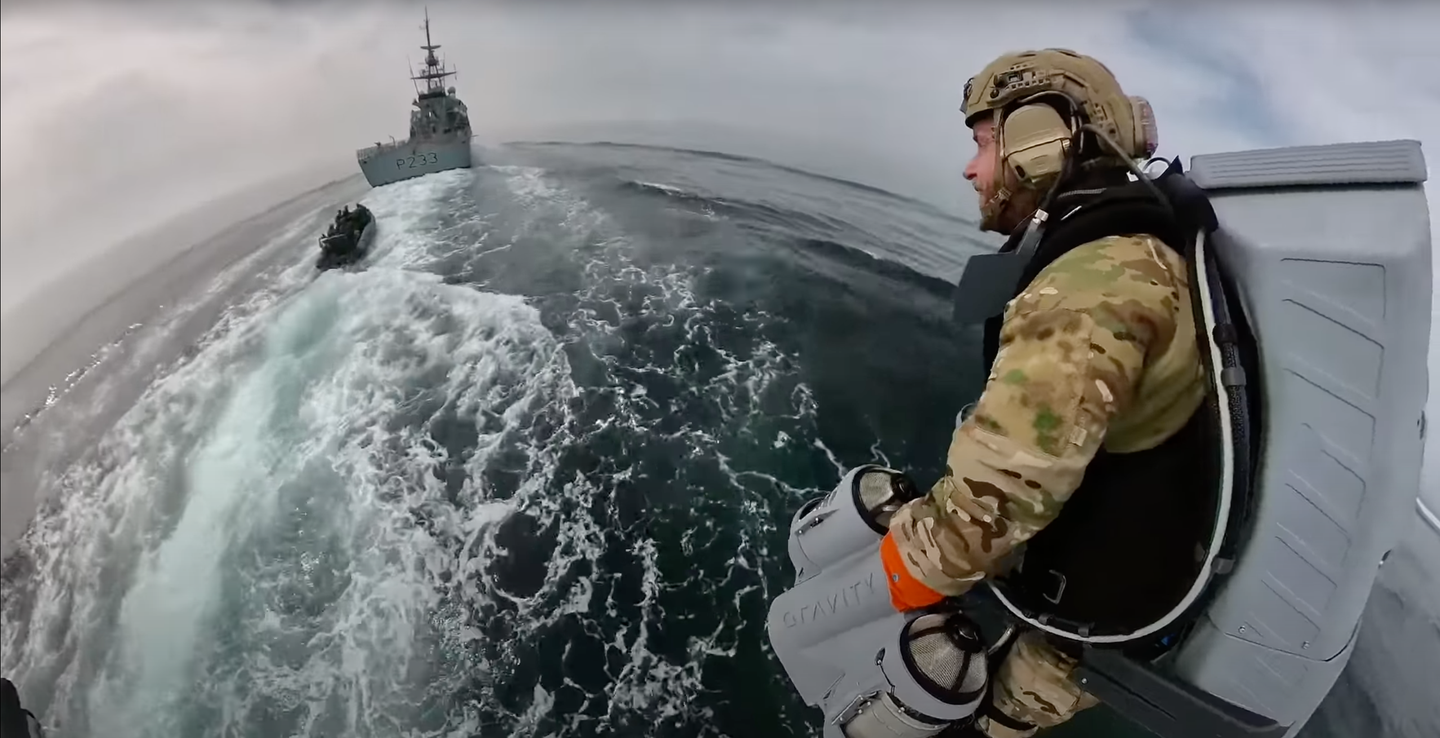 I hope you are ready for jet-powered Marines to attack the enemy as if they are Mandalorians because a new video from Gravity Industries shows what it may look like: an armed, bearded, jet-backpacked operator doing a high-flying hop from a rubber boat onto a ship in mere seconds.

“The footage speaks for itself,” the company wrote on YouTube after its successful demonstration of its Jet Suit, which gives an operator more than 1,000 horsepower of jet power literally at their fingertips.

“The vision with the Jet Suit is to provide extremely rapid access to any part of the target vessel, instantly freeing up hands to bear a weapon, and even retaining the capability to relocate on target or self-exfiltrate,” the company said in a news release. “This is increasingly seen as a revolution in tactical capability for many special forces and has much broader application beyond maritime boarding.”

The usual route for boarding and seizing ships is to use small boats and ladders or have operators rappel down from helicopters. U.S. Marines in the South China Sea, for example, showed off their skills in what is called visit, board, search, and seizure operations (VBSS) last year by fast-roping from helicopters onto the USS Germantown and cutting through simulated barriers to enter the ship’s passageways.

They then methodically cleared the ship and detained “hostile forces” while snatching a “notional cache” of illegal weapons onboard. British Royal Marines, meanwhile, did the real thing in July 2019.

But that takes time and often exposes helicopters to risk. Why not just overwhelm a ship with jet-setting troops — troops that can seize the ship’s bridge in about 15 seconds.

The video shows three versions of an underway boarding exercise. In the first, the jet-jumping Marine operator launches from the front of the rubber craft and quickly heads to the side of the ship’s bridge where he lands and then throws over a ladder to his pals, who have moved alongside the simulated enemy craft. The operator then latches his jetpack hands to the side of the pack and pulls out a pistol so he can clear the bridge.

In the second boarding exercise, the jetpack operator pulls the exact same move — flying to the bridge and then slinging over a ladder — before taking off once again and landing on the helicopter landing pad on the aft section of the ship. In the third demonstration, there are three jetpack operators coming in for a landing in the same spot, which begs the question: can you imagine the chaos of being on a ship as dozens of seemingly insane commandos start flying in and landing throughout the vessel to take control?

We’ll have to keep imagining, at least for now, since there’s no indication this tech has moved from cool idea to actually being practical for military use, despite the company holding demos like this for the past two years, as Joseph Trevithick points out. The jet pack system is “heavily automated” and information about fuel and engine status is shown to the operator through a heads-up display in the helmet, according to The War Zone. But the suit reportedly costs more than $400,000 and has a flight time of only about 10 minutes.

Gravity pulled off a similar demonstration in the English Channel in 2019, as The War Zone reported. Company founder Richard Browning, a former oil trader and Royal Marine reservist, personally strapped on the jet pack and showed how he could easily fly through the air and land on a moving ship.

There are other potential uses: Consider a jetpack-laden sailor hopping from one ship to another for underway replenishment operations. Combat medics can potentially use the packs to get to casualties even faster. Or how about dropping the packs to downed pilots who can strap it on and evade capture? Though it hasn’t honed in on jet packs, the U.S. Air Force is actively looking for a better way of recovering pilots.

Those ideas are probably a long way off. But if and when the time comes and supply is issuing you a new jet pack, just remember to have a badass phrase ready before take-off. Saying “I’ll take the high road” is sure to make those regular old walking grunts extremely jealous.