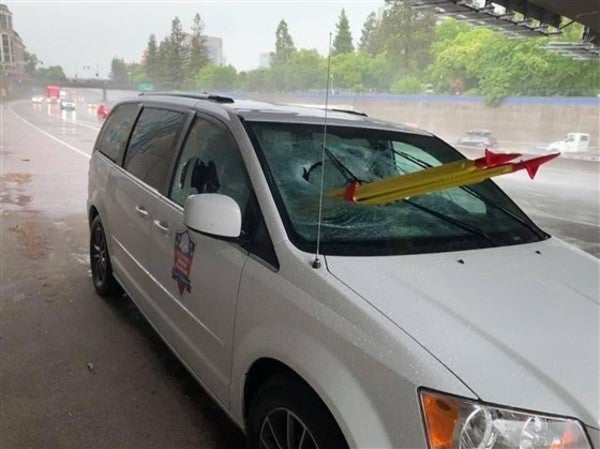 Officers from the California Highway Patrol arrested a homeless man Thursday morning after he allegedly threw a stolen Caltrans tripod onto Interstate 5 in downtown Sacramento, endangering the occupants of a van as it crashed through its windshield.

Five minutes later, the tripod “was deliberately thrown” from 2nd Street west of I-5, the news release said. The tripod crashed through the windshield of a Dodge van driving southbound on I-5, according to the news release and photos of the damage. A portion of 2nd Street overhangs the freeway.

The incident caused a “medical emergency” for the occupants in the van, who were transported to UC Davis Medical Center for treatment and evaluation, CHP said.

Military Family Support Group, a Placerville-based nonprofit that provides transportation, financial aid and other resources to El Dorado County veterans, said in a Facebook post Thursday that the vehicle involved in the incident was one of its vans.

A veteran riding in the front seat of the involved van was hospitalized with broken ribs and a partially collapsed lung, and also required stitches, the post said. The van's volunteer driver was not harmed.

A suspect who was identified via surveillance video was located in the area of Front Street, near the initial theft, and approached by CHP officers about 1:20 p.m., according to the news release.

The suspect, identified only as a 32-year-old transient from Sacramento, fled the officer on foot but was quickly detained after a short pursuit and brief struggle, CHP said.

The man has been booked into Sacramento County jail for resisting a peace officer and for an active warrant.