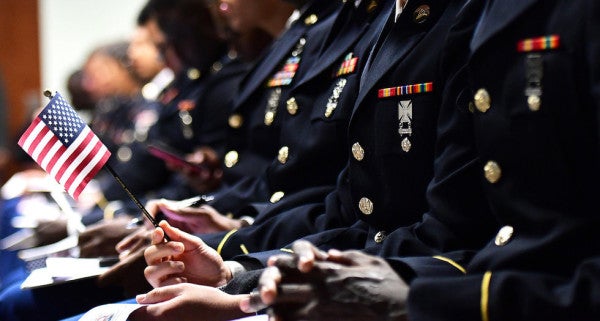 A five-year review of how the government deals with veterans with immigration issues shows that laws designed to give more protection to those who served in the military are spottily enforced.

The report from the Government Accountability Office found that veterans who never gained U.S. citizenship didn't consistently get consideration for their service in the face of possible deportation. The agency called on Immigration and Customs Enforcement to “ensure that veterans receive appropriate levels of review before they are placed in removal proceedings.”

The review, requested by the House Committee on Veterans Affairs, comes as the Trump administration cracks down on illegal immigration and ramps up efforts to deport non-citizens who have run afoul of immigration rules. Among the findings: While the military has enlisted more than 44,000 non-citizens since 2013, the number of them applying for and receiving U.S. citizenship has fallen.

From the time of the Revolutionary War, America has relied heavily on immigrants to shoulder its military duties. With Army recruiting falling short of goals amid a hot jobs market, immigrants have become a key component for filling out the ranks.

Part of the appeal of military service for immigrants is that it offers a path to citizenship or legal residence and gives veterans more protection from deportation.

But in the GAO's review, investigators found that 70 percent of cases involving the deportation of noncitizen veterans didn't get required reviews.

As a result, “some veterans who were removed may not have received the level of review and approval that ICE has determined is appropriate for cases involving veterans,” the agency said.

Over a five-year period ending in 2018, America deported 250 noncitizen veterans, the agency found.

It has also become more difficult in recent years for noncitizens to join the military, thanks to new stringent background check requirements. The Pentagon told investigators that a backlog on those background checks had some recruits waiting for more than a year before they were allowed to enlist.

The Pentagon and immigration officials have also made it harder for immigrant recruits to gain citizenship.

Special rules allow a fast-track for troops to gain citizenship. That path requires the Pentagon to certify that immigrant troops are serving honorably, a certificate the military used to issue after just a few days of service.

The rapid path to citizenship saw the federal Citizenship and Immigration Services Department opening offices at military basic training sites, allowing troops to swear in as citizens as soon as they wrapped up their first military training.

Under new Pentagon rules, though, troops must wait six months or more before they qualify, and those citizenship officers at boot camp have been closed down.

WATCH NEXT: Meet The Men Of Deported Veterans House