A new bill would raise the tobacco purchase age to 21, military included

The new measure, called the Tobacco-Free Youth Act, is being considered by the senators in response to what they call a "significant public health issue" facing the nation in which more teens are vaping tobacco. It would make it illegal to sell any tobacco product to someone under 21. 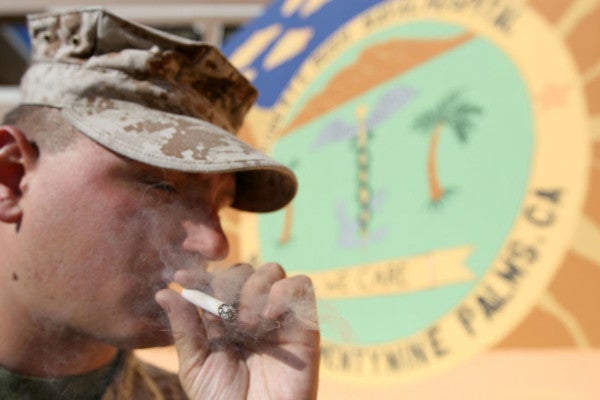 You may want to start stocking up on cartons of Marlboros and logs of Copenhagen like you're about to go on deployment, because a new bill would make it harder to buy dip or a pack of smokes at your local exchange if you aren't 21.

Senate Majority Leader Mitch McConnell (R-Ky.) and Sen. Tim Kaine (D-Va.) are planning to introduce a bill on Monday that would raise the minimum age for purchasing tobacco across the United States from 18 to 21, and there won't be an exception for military personnel.

The new measure, called the Tobacco-Free Youth Act, is being considered by the senators in response to what they call a “significant public health issue” facing the nation in which more teens are vaping tobacco. It would make it illegal to sell any tobacco product to someone under 21.

McConnell had planned to exempt military members from the legislation, but opted against it since he didn't think the military should be “treated differently on a public health issue,” according to an interview he gave to the Lexington Herald Leader.

Which means the black market and insane markups on tobacco products military members are used to when in austere environments is about to follow them stateside.

The Reagan didn't sell dip in the ship's store…but I did, out of my rack, with a 300% markup at $10 a can. Despite care package resupply, I still couldn't keep up with demand. I've seen dip sell for $20/can if we hadn't hit port in a while.

“By making it more difficult for tobacco products to end up in the hands of middle school and high school students, we can protect our children and give them the opportunity to grow and develop into healthy adults,” McConnell said in a statement to The Washington Post.

Besides potentially cutting down on the use of tobacco products among teens and younger military members, the bill — if signed into law — will have a side benefit of giving the Duty NCO one more thing to catch underage troops doing in the barracks.

Hey there, private, is that a 30 pack of beer in your room? And wait, are those ILLEGAL CIGARETTES?

That's it, you're going in the logbook, buddy.

It's not a done deal yet, but given its backing by the top Republican in the Senate, it's highly likely to come to a vote. At which point you can nervously smoke all of your cigarettes as you wait for the tally.