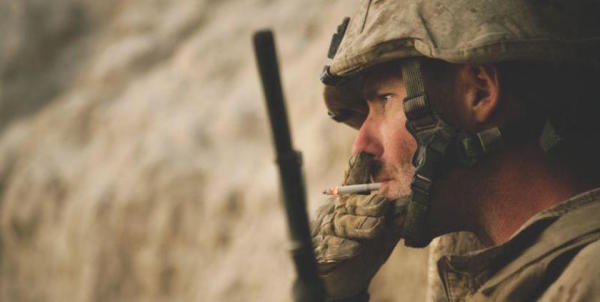 All was quiet aboard California Marine and Navy bases Thursday as a new law raising the age to purchase cigarettes from 18 to 21 took effect. But unlike the first law to raise the smoking age to 21, which took effect in Hawaii at the start of the year, this law explicitly exempts active-duty members of the military from having to comply.

While the Marine Corps and the Navy prepared troops for the new law in Hawaii with all-service bulletins threatening penalties for violators, the military response this time around was minimal.

“I have not heard any comments from Marines on the installations with concerns,” Carl Redding, a spokesman for Marine Corps Installations West, told Military.com.

Redding said there were no near-term plans to push out information informing troops of the legal exemption or to promote military smoking cessation plans in light of the new law.

Helen Haase, a public affairs officer for Navy Region Southwest, which includes Naval Base San Diego, said the base had no plans to act regarding the new law either.

A source in the California state Senate told Military.com that the smoking age exemption for active-duty troops was added by members with military constituencies who raised the popular argument that troops old enough to go to war should have the freedom to smoke if they chose.

It's an argument that carries particular weight in the military, where a 2011 Defense Department survey found that nearly one in four troops smoke. The Marine Corps reported the highest rate of cigarette smoking, with smokers making up nearly one-third of the force.

Notably, the California law would leave military base commanders with the option to enforce the 21-and-over tobacco purchase policy aboard their installations, if they chose to do so.

To date, no base has taken this step.