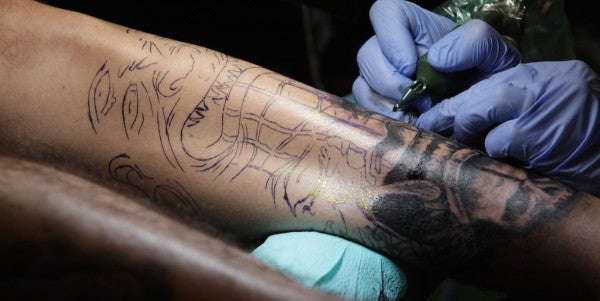 The Corps will now let Marines wear slightly bigger arm band tattoos, but the popular sleeves — ink covering most or all of a person's arm — are still banned, according to a detailed new policy published Thursday.

Also new: Marines are allowed to get a small tattoo on the finger of one hand — a nod to the popular practice of getting a tattoo in lieu of a wedding ring.

But those looking for major changes to the Corps' long-standing tattoo prohibitions will be disappointed. The new policy still prohibits Marines from inking hands, feets wrists, and necks. And for officers, the policy still limits the number of tattoos visible in physical training gear to four.

All these updates are included in an extensive 32-page bulletin that instructs Marines on not only where tattoos are permitted, but how to measure their tattoos using their hands and visual references to ensure compliance.

The Marine Corps launched a review of its tattoo policy in March 2015 after then-commandant Gen. Joseph Dunford and Sergeant Major of the Marine Corps Ronald Green fielded numerous questions about the rules during a tour of Marine bases.

In 2007 and 2010, 34th Commandant James Conway introduced a number of unpopular tattoo prohibitions that banned sleeves and limited tattoo size everywhere else in an effort to develop a more professional appearance for Marines.

“The Commandant said it best … that we've attempted to balance the individual desires of Marines with the need to maintain the disciplined appearance expected of our profession,” Green said in a statement Thursday. “I think we have accomplished just that … We took the time we felt this policy deserved, we wanted to make sure we got it right.”

The new tattoo policy still prohibits sexist, racist, obscene and extremist tattoo content. Chest or back tattoos can be unlimited in number, but must be entirely covered by a crew-neck T-shirt.

Band tattoos, which extend around the circumference of an arm or leg, can be three inches wide, or the width of the Marines' four fingers extended and joined, whichever is greater. This is an inch wider than the previous policy allowed for band tattoos.

Tattoos on elbows and knees are still prohibited, but the policy allows a single tattoo below the knee or the elbow as long as it can be covered completely by the Marine's hand. The Marine can also get a collection of small tattoos that fit underneath a hand, or a band tattoo instead.

If female Marines have visible tattoos on their legs, they must wear slacks instead of a skirt in the service and dress uniforms.

Starting now, Marines have 120 days to get non-compliant tattoos formally documented in their personnel file. Enlisted Marines will have their tattoos reviewed for compliance whenever they submit a retention package for reenlistment, and officers will be reviewed for tattoos at each promotion board.

The new policy warns that enlisted Marines who wish to pursue a commission as an officer should make sure their tattoos comply with the standards for officers limiting visible tattoos to four. And for those considering special duty assignments, such as Marine security guard or drill instructor, the policy warns that even regulation tattoos might limit their options.

Marines will not receive special duty assignments if any of their visible tattoos do not comply with the new regulations.

And “a tattoo may not be specifically prohibited, but could prevent future commissioning or duty assignments,” states the policy, signed by Commandant Gen. Robert Neller.

The policy comes in sharp contrast to a tattoo update recently released by the Navy that permits neck tattoos for the first time and lifts tattoo size restrictions entirely. Navy officials said the new policy was an acknowledgement of the popularity of tattoos with the youngest generation of sailors a key recruiting population for the service.

“I can tell you right now that not everybody is going to be happy,” he said. “The Marine Corps is an organization that prides itself on its relationship with the American people. We've got a history of being a smart, well-groomed professional force, and this commandant has no intention of walking away from any of those precepts. And so this tattoo policy will be respecting individual desires but also understanding that we are a military force.”

In a statement, Green said Neller wanted to make sure Marines knew they were being listened to with the new tattoo policy.

“He's allowed more skin area for tattoos in an effort to balance the Marine's desires with the Grooming Standards of the Marine Corps,” Green said. “He wanted the policy to allow Marines freedom and flexibility to express themselves, while also being clearly written and understandable for both Marines and their leadership.”