Waiting For Other Services To Get The Army’s New Pistol? You’ve Got A While

Last week, we got confirmation of a sort that the other three armed services would adopt the Army’s new Modular... 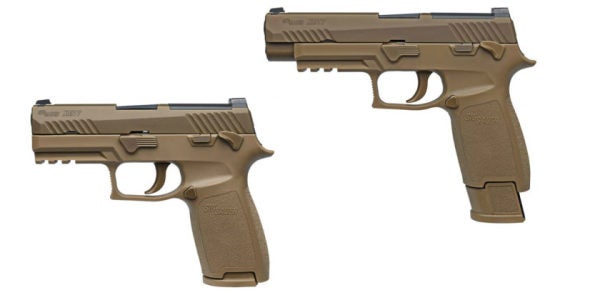 Last week, we got confirmation of a sort that the other three armed services would adopt the Army’s new Modular Handgun System, the M17, to replace the old Beretta M9 service pistol. At least, that’s what Army officials told Military.com in a widely shared story about the MHS program’s progress: The Air Force, they said, was down for 130,000 pistols; the Navy would buy 61,000; and the Marine Corps would take 35,000. Altogether, the three services would take more of the guns than the Army, which was ordering 195,000 M17s.

Not so fast, though. Task & Purpose asked representatives of the individual military branches about their plans to replace the venerable M9, and for the most part, they’re not yet on the same page as the Army.

Asked if the Marines intended to replace the M9 with the M17, a spokeswoman for the service told T&P;, “No decision by the Marine Corps has been made.” She added that “the Marine Corps is looking at it, and has been involved in all testing, but we do not have a timeline yet for procurement.”

“The Navy plans to procure a Modular Handgun System through a multi-service contract,” a spokeswoman for the Navy's Naval Sea System Command told T&P; — but since the Army’s MHS contract is being contested, she couldn’t say when the Navy's buy might actually happen; certainly not anytime soon.

The US Air Force did not respond to Task & Purpose’s request for a comment before publication.

Back in January, the Army announced the selection of SIG Sauer's entry into the MHS program, awarding the company a 10-year contract worth $580 million for more than 300,000 pistols, as well as spare parts, magazines, and training. Some controversy has arisen over the contract, with SIG's rival, Glock, lodging a Government Accountability Office protest in February. More recently, Steyr Arms launched a patent infringement lawsuit against SIG. While the GAO protest is expected to be ruled on in June, it remains to be seen whether these challenges will delay, or even scuttle, the adoption of the M17 by the other service branches.

While the other services were involved in the Army's MHS program, it is probable that funding is the primary factor that delays the M17’s general adoption by the other service branches. The purchase of a new sidearm is inevitably a low procurement priority for the naval and air services — though, when funding becomes available, the M17 will almost certainly be their the choice, as noted by Military.com.

The US Army recently announced that the 101st Airborne based at Fort Campbell in Kentucky would be the first unit to be issued the new sidearm.