Well, vape ‘em if you’ve got ‘em. Quickly. The Navy just announced that it will no longer allow service members... 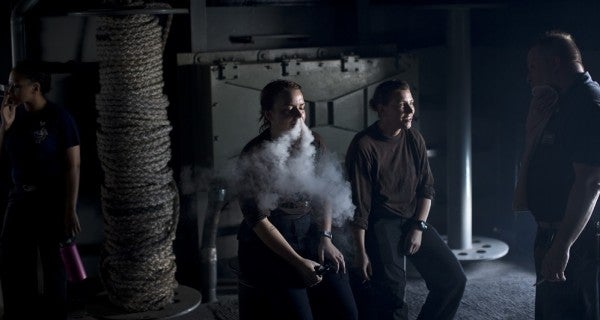 The Navy just announced that it will no longer allow service members to bring electronic cigarettes onto its ships, submarines, aircraft, boats, and other heavy equipment — sorry, Seabees, that probably goes for your bulldozers, too.

For a service that’s defined by maritime operations, a ban on vaping — inhaling the vapor created by an electronic cigarette — while underway is sure to hit a lot of sailors and Marines hard. Thanks to e-cigs, smokers finally had a chance to get their nicotine highs indoors, without facing the scorn and disgust levelled at fans of chewing tobacco. Alas, no more.

The rationale for the ban — aside from everyone within spitting distance of an e-cig being overwhelmed by the cloud of smug — was a series of explosive and fire incidents caused by electronic vaporizer batteries, according to a joint statement by the U.S. Fleet Forces and U.S. Pacific Fleet obtained by NPR.

“The Fleet commanders implemented this policy to protect the safety and welfare of Sailors and to protect the ships, submarines, aircraft and equipment,” the joint statement said.

The lithium-ion batteries of some e-cigarettes, it turns out, have been known to explode. According to a Navy memorandum issued last fall, 15 “mishaps” related to e-cig batteries, causing injury to service members or damage to property, occurred between fall 2015 and the following summer.

The vaping ban will go into effect on May 14 and “remain in effect until a final determination can be made following a thorough analysis,” according to the statement. However, sailors can still vape to the their hearts’ and lungs’ content while on base, as long as they do it in a designated smoking area; so much for vaping indoors.

Task & Purpose reached out for comment on the new Navy policy to two well-known vaping enthusiasts: Grover Norquist, the founder and president of Americans for Tax Reform;

And Republican Congressman Duncan Hunter of California, a self-identified vaping connoisseur and a Marine Corps veteran.

As of press time, we have yet to hear back from either man, but will update the story as new information comes in. Perhaps on their next vape break.