Celebrate The Blue Angels’ Birthday With These Insane Secrets And Videos 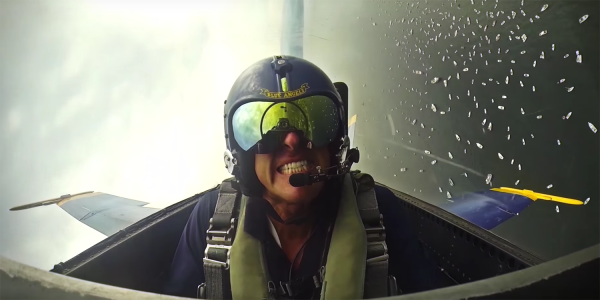 On April 24, 1946, Adm. Chester W. Nimitz ordered the creation of a Navy flight exhibition team to boost morale and engender good civil-military relations. The legendary Navy chief turned to a war ace, Lt. Cdr. Roy Marlin “Butch” Voris, to whip up a team of F6F Hellcat pilots to do crazy and daring stuff for gawking crowds. The men trained secretly, practicing dicey maneuvers in the empty Florida Everglades so that “if anything happened, just the alligators would know,” as Voris put it.

To celebrate the Blues’ many years of diamond rolls and double farvels, we’ve excerpted some secrets on their ops from Foxtrot Alpha editor Tyler Rogoway’s fantastic 2015 interview with Cdr. Sean “Linus” Swartz, the Blues’ naval flight officer and No. 8 man. And to underscore just how good these pilots are, we’ve included some videos you won’t want to miss. Happy birthday, U.S. Navy Flight Demonstration Team!

1. Getting into the Blue Angels “is like a fraternity rush.”

Let’s say you’re one of the nearly 100 pilots who shadowed the Blues during their show schedule from April to June, and you were one of the 30 or so who got invited to HQ in Pensacola for July testing and the “dreaded interview,” as Swartz calls it:

The interview is a 1 vs 16 interview. Candidate comes into the ready room and all 16 Blue Angels officers are in there. Each Blue Angel asks the candidate one question, which can be anything. I won't repeat any of the questions, but suffice it to say the goal of the interview from the team's perspective is to flush out anything that might make this candidate not a good choice to represent the USN and USMC for 2 years in the public eye. It's also a good chance to see how the candidate reacts to all sorts of questions – very akin to the media interviews this candidate will have to perform week in and week out should they be awarded a coveted slot on the team.

Shortly after, you get a call from the boss of the team. “When the Boss calls you to let you know if you made the team, if he puts you on speaker you're in, otherwise you're out,” Swartz says. “When a candidate makes the team the Blues have a special message for that candidate that they share in unison and gives no mistake about the fact that you made the team.”

Swartz declined to share that exact message. But Rogoway said he believes it’s “something akin to 'Welcome to the team asshole!'”

2. “When the Blues were founded in 1946, one of the original requirements was that all members had to be bachelors.” It’s not like that anymore… technically.

“About once a month my girlfriend (now wife) would fly out and spend the weekend at the show with me, which was great,” Swartz said:

I didn't have a family at home, didn't have kids activities I was missing. I'm sure this was very challenging for the married folks. No doubt for someone married to be a successful BA, they need absolute buy-in from their spouse and family. The spouse basically runs the family Thurs-Sun and then Mon-Wed the BA is home disrupting what the spouse has been doing.

“The Blues attach a 40lb spring to the stick in the jet,” Swartz said. “This spring applies 40lb of nose down stick pressure, so to fly straight and level each pilot is essentially doing a 40lb curl.” What the hell for? This:

The purpose of this is it takes out the slop in the stick (imagine driving down the street in your 1965 Ford F-100 and the wheel moves +/- a couple inches left or right without the truck actually moving, same thing happens in a jet, and you can't have that flying a few feet apart).

4. One of the best perks of being a Blue Angel? Golf.

Every Blue Angel ends up doing a lot of other duties on the ground. Sometimes, as in Swartz’s case, business and pleasure mix easily:

One of my jobs that I voluntarily took on was arranging golf each weekend. I would find out how many people were interested in playing and ask the show site to find a tee time for us. Most of the time this resulted in a round at the finest course in town. I tried to play golf every weekend, and probably played 50 courses that I would never be invited to play at now.

Can’t decide if you want to catch the Blues this year at Oshkosh or Oceana? Take Oshkosh, Swartz said:

I can also say that generally speaking, the military shows sites were typically less fun than the civilian sites. Part of that is budget. Military shows don't charge admission, they use all in-house labor, and don't make a ton of money (what they do make is generally fed into the base MWR programs – Morale, Welfare, and Recreation). Part of that is some military shows “expect” you to be there. The Blues come every year as part of the military outreach and the show sites develop a sense of entitlement. It's just a different reaction than when you make it to Janesville, WI once a decade.

6. “The Blues are required to shave before being seen in public, must iron and tuck in their shirts, and are not permitted to wear open toed shoes (men anyways). Violations cost you $5.”

You want folks on the Team that will respect the status the blue suit affords and use that opportunity to promote our USN and USMC and all the wonderful men and women that serve in it. You want that blue suit to make a difference to the 14 year old kid at an airshow that will go home and tell his parents he wants to be a fighter pilot, and will work hard for the next 10 years to achieve that. You want folks wearing the blue suit that want to continue the awesome legacy started by Boss Butch Voris and his Team in 1946. You can't afford having folks on the team that will abuse the privilege of wearing that Blue Suit for some personal gain. You can't afford dudes on the Team that forget that who the public loves is Blue Angel #XX, not Johnny Go-getter.

7. Deployment is a lot more challenging than flying with the Blues in a lot of ways.

How does all this differ from deployment? Much different. Besides the obvious that you are sleeping in nice hotels and eating in restaurants instead of sleeping in a 6-man on the boat and eating chicken in the Dirty Shirt Wardroom, think of the mission: The Blues fly the same thing, every day. The warriors on the front end are preparing to go into battle, potentially kill people, protect our troops on the ground and possibly get shot at…. followed by a night trap (landing aboard the carrier at night). The Blues flight, while dangerous, high pressure, and high stress, lasts 45 min. A typical mission off the boat “in country” lasts 6-8 hours.

8. Blue Angels mess up all the time. But they admit it.

No environment is a zero-defect environment… and all aviators are expected to police themselves:

One of the tenets we are taught as a Blue Angel is the ability to admit when we've made a mistake, or have not “achieved perfection.” This is done in the form of “Safeties.” Each debrief is started by an around the room tally of “safeties”, starting with the Boss and working down to the supply officer in order. For example when it was my turn I might say “I'll take a safety for late hits on the Low Break Cross and Fortus and an additional safety for an early hit on the Delta Roll. I'll also pay $5 for not shaving before I went downstairs for a coffee and I'll pay $5 for a zipper. I'll fix it tomorrow, Glad to Be Here.” This is essentially telling the Team that I made mistakes on 3 maneuvers and also recognize I violated policy by being in public unshaven and for having a zipper on my flight suit unzipped. Since the latter two are policy violations, they cost me $5. The essence of my mistakes is not important, that will come out during the meat of the tape review during the debrief, but the fact that I recognized them and owned up to them IS important.