On Aug. 2, Spc. Chris Harris died in Afghanistan, one of two soldiers from Fort Bragg’s 82nd Airborne killed when... 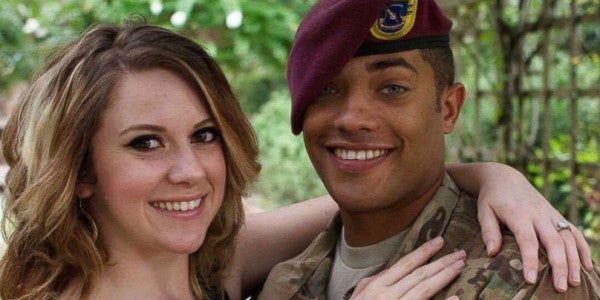 On Aug. 2, Spc. Chris Harris died in Afghanistan, one of two soldiers from Fort Bragg’s 82nd Airborne killed when an IED struck their convoy near Kandahar. Harris’ wife, Britt, was pregnant with their first child.

Two months later, on Oct. 5, Harris’ brother soldiers, still deployed downrange, posted a video welcome to a “new member of the company” — a video you might not expect from a crew of battle-tested Airborne grunts. It was a touching gender-reveal party in Afghanistan for the Harrises’ baby, ahead of its birth:

Pfc. Joel Crunk of Mississippi served with Harris and posted the video to his YouTube account. “August 2 2017 Chris Harris laid down his life for our country. His newly wed wife was expecting their first child,” Crunk wrote in the video’s description. “The reveal is in Afghanistan with the men who fought by his side. We are happy to welcome the new member of our company.”

The heartwarming video, replete with pink confetti-poppers, brought tears to Britt Harris’ eyes, she told ABC News. “I probably watched it 100 times myself,” she said. “I was crying but smiling because their reaction was so wonderful.”

But she wasn’t completely surprised: She’d let the soldiers in on the baby’s gender, after all.

“Chris is an only child. They were his family,” she told ABC. “Everyone that I’ve met, before Chris passed and after, if they’re in the military, they’ve treated me like actual family or royalty, actually.”

It was the least they could do for family. “Chris was an amazing guy and a great soldier,” Crunk told a hometown TV station. “He sacrificed his life on the altar of freedom. I'm honored to share his story.”

Meanwhile, Britt has another tribute to her fallen husband planned.

Christopher Michael Harris’ daughter, she says, will be named Christian Michelle Harris, after him. Just as soon as she gets around to being born.