On May 19, 2004, anti-coalition forces attacked a U.S. military convoy on the northern outskirts of Samarra, Iraq — a... 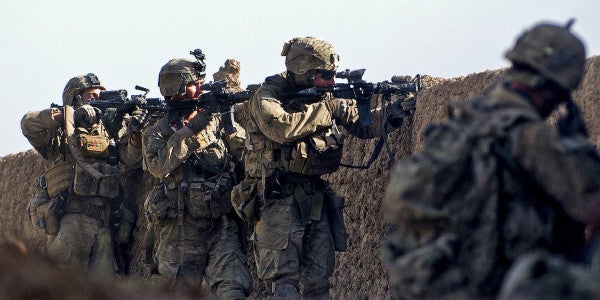 On May 19, 2004, anti-coalition forces attacked a U.S. military convoy on the northern outskirts of Samarra, Iraq — a routine resupply mission my platoon made at least twice a week. Those of us back on Forward Operating Base Mackenzie quickly learned we had a KIA, but we didn’t know who. We waited in silence, wondering which one of our friends would not be coming back. Eventually, we saw the silhouette of our platoon sergeant trudging toward us across the loose gravel between the tactical operations center and our platoon that slowed all movement. He knew the name. As he got closer, we could see the tears streaming down his face. “Campbell” was all he said. Michael Campbell, a real cowboy who the year before shared Christmas dinner with my family, died that day.

I always go back to this memory of the first time I faced the loss of a soldier when I hear a service member has died overseas: The ultimate sacrifice made for all Americans regardless of gender, sexual orientation, religious belief, or even political party. Soldiers don’t serve one political party. Enemy bullets do not discriminate between Democrats and Republicans. Soldiers defend all Americans.

Soldiers from 1st Platoon, Company B, 5th Battalion, 20th Infantry Regiment move into a house to search for weapons and anti-Iraqi forces during operations in the western Ninevah Province City of Tall Afar during the early morning hours of Aug. 1, 2004.DoD photo

Unfortunately, both Democrats and Republicans have turned the tragic deaths of Sgt. La David Johnson and his three comrades who were killed in Niger on Oct. 4 into a political statement that cheapens their sacrifice. Instead, everyone seems focused on what was said during a condolence phone call to a grieving wife and claiming they had no idea we even had thousands of troops in Africa. It’s easy to make angry accusations and feign ignorance, but ultimately the presence of U.S. troops in Niger was public knowledge; many politicians just weren’t paying attention.

For too long, Congress has been more than happy to defer responsibility for troop deployments to the president and Department of Defense, shielding itself with the 2001 Authorization for the Use of Military Force, which authorized the president to “use all necessary and appropriate force against those nations, organizations, or persons he determines planned, authorized, committed, or aided the [9/11 terror attacks],” and use “necessary and appropriate force” to “prevent any future acts of international terrorism against the United States by such nations, organizations or persons.”

But it’s been 16 years. Rather than argue over the politicization of soldier deaths, politicians should look at the conditions and reasoning behind the deployments. Bin Laden is dead. Saddam Hussein is dead. It’s time for Congress to assess the current strategy and determine whether it remains in America’s interest to expand the forever wars. All soldiers know the risk when they take the oath, but they also put their trust in the American public and their elected officials to properly debate the risks and wisely send them into harm’s way.

Each time I deployed, I knew the reason. In Kosovo, I deployed to prevent ethnic cleansing. I delivered ballots in 2005 for the first free Iraqi elections. In Afghanistan, two years later, I fought the Taliban and worked to strengthen Afghan governance. These were goals I understood. Congress authorized those military operations.

By not acting, policy-makers avoid the responsibility of soldiers’ deaths and can simultaneously place the blame on the president by seeming outraged. The decision to send troops to their deaths is not an easy one to make. I understand why Congress shies away from it, but that doesn’t make it right. It is their responsibility. The AUMF needs to be updated. Congress must have their say. Our troops and their families deserve it.