The Army is developing new 40mm training rounds for both individual grenade launchers and crew-served weapons that will allow for... 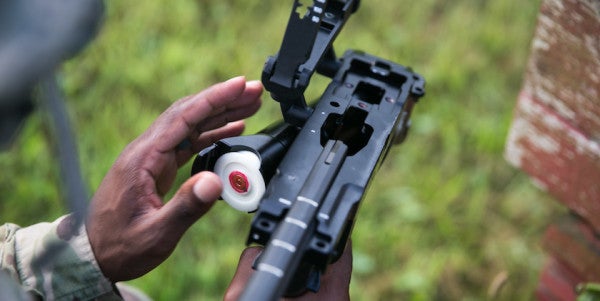 The Army is developing new 40mm training rounds for both individual grenade launchers and crew-served weapons that will allow for “more realistic” training than those currently in use, Military Times reports.

According to officials, the training rounds being used now are too volatile for firing into areas where dismounted troops are about the pass through. In combat, soldiers will often initiate an assault by shooting 40mm rounds at their objective, which means the current training rounds limit a unit’s ability to train how it fights.

“Typically, soldiers can’t conduct fire and maneuver training due to the safety risk,” Christopher Seacord, product director for medium caliber ammunition, told Military Times. “What we would like to do is remove the energetic from the cartridge so that even if it did not function downrange, and someone stepped on it or picked it up, it would not hurt them.”

With only 10 components, the new HV design is far less complicated than its predecessor, comprised of 39 parts. It’s also cheaper, expected to save the Army $4 per round or, as Military Times reports, approximately $8 million for the service’s total ammunition stock. The goal is to have both rounds fielded by August 2019.