NATO countries are getting serious about sending armed robots into battle

"We are under the direct eyes and ears of the Russians, and as such in a semi-operational environment.” 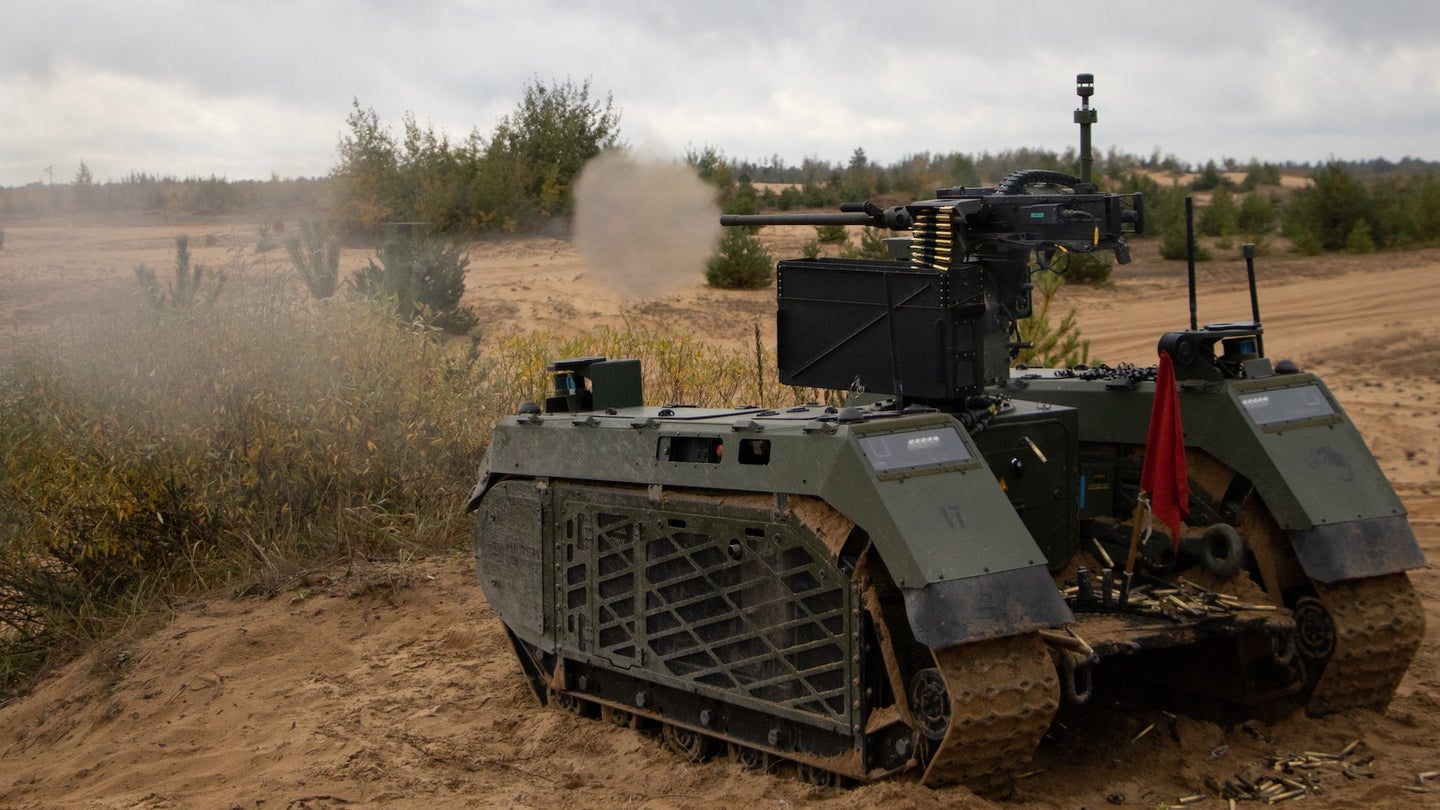 After watching so-called “strategic competitors” roll out all manner of ground combat robots in recent years, it appears that at least one NATO country is leading the charge when it comes to testing its own family of battlebots.

Janes, which first reported news of the deployment, notes that the THeMIS UGVs “are currently undergoing trials with a view to developing and refining doctrine at the platoon level” for RNA forces.

The THeMIS combat UGVs can be outfitted with “light or heavy machine guns,” 40mm grenade launchers, 30mm autocannons, and anti-tank missiles, according to Milrem, making them purportedly ideal as direct fire support for maneuver forces.

“We have deployed four weaponized [unmanned] machines within an operational experiment. To my knowledge, we have not seen this before in the West,” RNA Lt. Col. Sjoerd Mevissen told Janes, noting that “we are under the direct eyes and ears of the Russians, and as such in a semi-operational environment.”

News of the operational experiment comes after years of testing of the THeMIS UGVs by both the RNA and the Estonian Defence Forces (EDF), which signed a joint procurement agreement with Milrem in September 2020 for seven of the systems, four of which would go to the former and three to the latter. Milrem had previously delivered two THeMIS vehicles to the 13th Light Brigade’s RAS Unit in 2019.

“The addition of four extra THeMIS vehicles with a Remote Controlled Weapon System that is operated by a soldier provides us the opportunity to continue to develop concepts to enhance the combat power and decrease the risk for our soldiers,” RAS commander Lt. Col. Martijn Hadicke said at the time.

While the RAS has been gradually testing the limits of the THeMIS system, the EDF has already deployed the unarmed variants of the UGV for logistics support alongside Estonian soldiers from the Estpla-32 infantry platoon in Mali as part of ongoing French-led counterinsurgency operation Operation Barkhane. (Unarmed THeMIS UGVs have also shown up in Ukraine in recent months to perform casualty evacuations).

“Deploying an unmanned vehicle will allow units to increase their combat power, as it reduces the physical load to soldiers and allows additional supplies to be included in an operation such as heavy weaponry, additional water and ammunition that could not be transported without the vehicle,” Estpla-32 2nd Lt. Madis Pärnpuu said in a statement at the time.

While the Netherlands and Estonia may be leading the charge with armed robot vehicle testing within the NATO alliance, the United States isn’t far behind. For the last several years, the U.S. Army has been testing light, medium and large variations of the so-called Robotic Combat Vehicle outfitted with remote weapons stations bristling with XM813 Bushmaster chain gun, .50 caliber machine guns, and FGM-148 Javelin missile launchers.

As recently as this past February, Green Berets with the 1st Special Forces Group used RCVs armed with M240s, .50 cal M2 machine guns, and MK19 automatic grenade launchers to “make initial contact with adversaries and mask operators’ movements towards the objective” during a two-week experiment at the Dugway Proving Ground in Utah, as Breaking Defense reported at the time.

And while Lt. Col. Mevissen claimed that the RNA experiment with the armed THeMIS UGVs “under the direct eyes and ears of the Russians” represents a first for NATO nations, he may not be totally accurate.

Indeed, the U.S. Army as recently as June had conducted another operational experiment at the Joint Multinational Readiness Center at the U.S. Army Garrison Bavaria’s Hohenfels Training Area featuring armed RCVs in both a rotational unit and the opposing force’s formations “to expose the rotational unit to capabilities that our adversaries are developing while at the same time evaluating emerging technology in a relevant tactical environment.”

Russia has almost certainly been cognizant of U.S. operational exercises across Europe since the invasion of Ukraine in February, and even if that wasn’t the case during the JMRC experiment in Germany in June, it’s clear that Russia’s own UGV efforts were top of mind for Army leaders present at the time.

“Our adversaries are developing these systems, so the Army must learn how to defeat them in training environments prior to meeting them in combat,” said Maj. Cory Wallace, Robotic Requirements Lead with the Next Generation Combat Vehicle Cross Functional Team that oversees RCV development, said in a statement.

Wallace isn’t wrong: Russia has used its military presence in Syria to test a variety of unmanned ground vehicles for future military applications, including both the unarmed Uran-6 minesweeping drone and the heavily-armed Uran-9 robot tank that’s intended for reconnaissance and fire support, as the Russian Ministry of Defense confirmed back in 2018.

In 2021, the Russian MoD announced that troops had deployed the Uran-9 for the first time in a “battlefield defense posture” during special drills conducted in the country’s Nizhny Novgorod Region, as TASS reported at the time. Less than a year later, footage suggested that the Russian military had deployed the Uran-6 to support sapper units in Ukraine’s Luhansk region.

With combat robots quickly proliferating across both sides of the battlefield following the Russian invasion of Ukraine, it’s no wonder that NATO countries are engaged in a combat UGV arms race — and if the U.S. Army is truly devoted to modernizing its force in the face of that “strategic competition,” chances are they’ll take a page from the Netherlands’ book and start fast-tracking combat-ready robots as soon as possible.