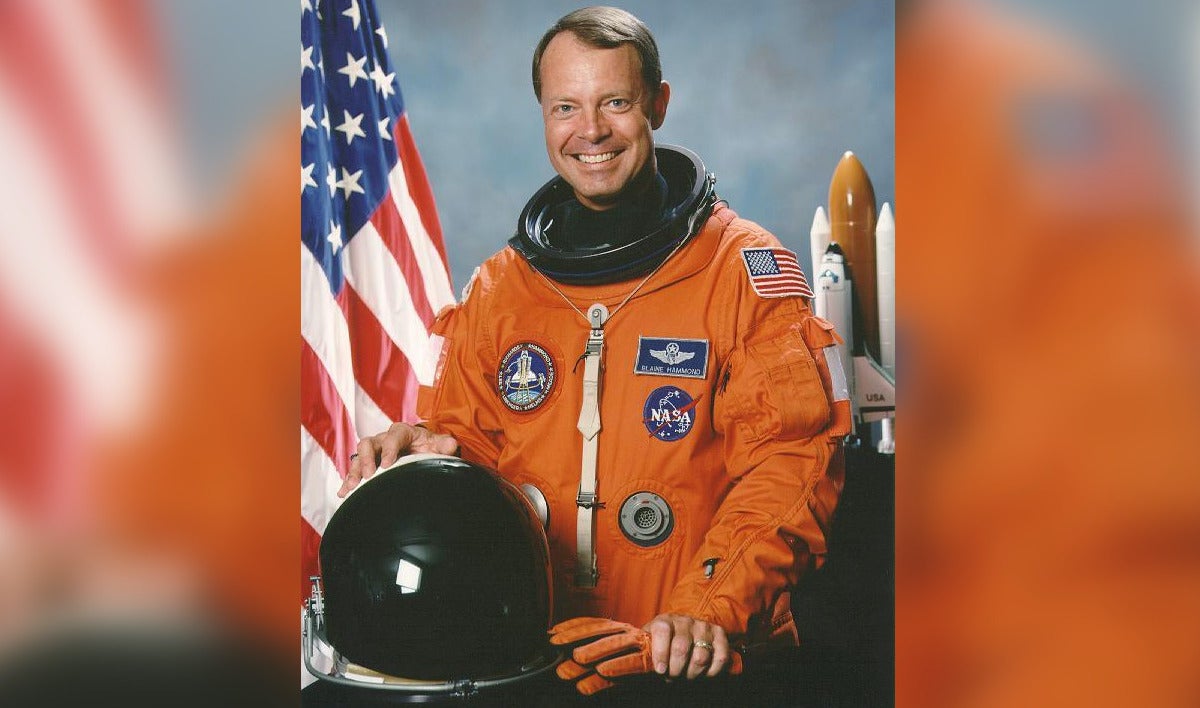 Welcome to The Things I Carry, a semi-regular series from Task & Purpose that examines the everyday carry of notable veterans. This installment features Col. L. Blaine Hammond (ret.), a former Air Force officer and pilot astronaut who flew multiple missions into space aboard NASA Space Shuttles.

Below, we dive into Hammond’s essential everyday carry both (way) downrange and at home.

These days, you can find Blaine Hammond at his local golf course in Nevada with a set of clubs, his trusty old GPS watch, and maybe even a refreshing beverage, which is exactly how Task & Purpose found him one weekend in March. Back when he was an astronaut in space and orbiting the planet at 17,500 miles per hour, his everyday carry looked a little bit different.

Ever since he flew as a pilot in the Air Force, Hammond has carried a solid parachute knife to cut tangled risers during an emergency. But in space, his everyday carry included plenty of items you might not think of.

For starters, NASA spent incredible amounts of money to equip astronauts with Fisher Space Pens to write in zero graviy. Astronauts do a lot of calculations and problem-solving on the fly, though, so Hammond admittedly found himself and his crewmates drawn to a clever Soviet solution instead: use pencils instead.

Then there’s the question of food. Those of you who have spent time in the field know that standard-issue food isn’t spectacular unless you consider debilitating intestinal distress to be spectacular in a power-of-nature kind of way. We’ve all squirreled away protein bars and ramen a time or two, and astronauts are no exception.

“In fact, for the second flight, my mom made homemade canned blackberry jelly — it was fabulous jelly,” Hammond said.

Things like this had to be approved, but as long as NASA’s nutritionists found no bacteria and determined that additional food was properly stored, astronauts were allowed to pack their own lunches. One of Hammond’s flight commanders brought his wife’s strawberry jelly. Tortillas were also very popular among astronauts because they created less of a crumby mess than bread in a zero-gravity environment.

Other mealtime favorites included canned tuna salad and chicken salad, hot dogs, and even the occasional MRE (fortunately, the shuttle had an oven so astronauts didn’t have to rely on a rock or something). Dehydrated food was compact, clean, and easy to store. Astronauts would stick a needle into the package and inject hot or cold water to rehydrate the food to its original state before eating. Some astronauts even gained weight in space.

As you likely know, it’s important to be prepared for the unexpected. If you’re lapping the planet every 90 minutes, that brings with it a lot of variables, possible issues, problems to solve — which means, you need the right tools. In 1975, American Express launched their “Don’t leave home without it” campaign, and Hammond took that message seriously: while astronauts didn’t carry wallets in space, he did carry his American Express card.

Of course, Hammond had no use for a credit card in space or at the designated launch and landing sites, but if anything unexpected happened, the crew could find themselves anywhere in the world — and having a little bit of money could make a big difference.

“If we had to do a contingency landing someplace immediately where they couldn’t respond to us, we didn’t have any money,” Hammond said.

In space, Hammond’s everyday carry was less about what he carried and more about how he carried it. Everything on the space shuttle had to be tethered or secured in place since any loose item could become a hazard in the absence of gravity. According to Hammond, one astronaut on a previous flight lost his Rolex and had to report it as a lost item after searching unsuccessfully for about a week in space. Upon return to Earth, the ground crew tore through the shuttle but were unable to find it.

It’s worth pointing out that the shuttle would accelerate with three times the force of gravity through the atmosphere. Upon entering orbit, it would slam to an abrupt stop–like mashing your brakes on the highway. The next time this happened, along came the watch from wherever it had hidden, flying past a crew of surprised astronauts.

So, the next time you find yourself going into space, remember to bring some spending money. Gear adrift is gear a-gift. And always pack some of mom’s home cooking. Just remember to tie it down.