The AC-130U Spooky gunship has completed its final combat deployment

The U.S. Air Force said its AC-130U, known as the "Spooky," has returned stateside from its last scheduled deployment 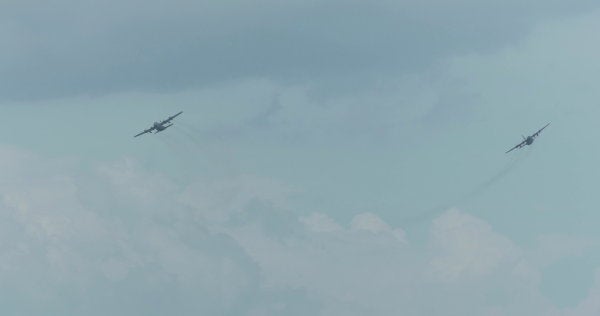 The AC-130U gunship has completed its final combat deployment.

The U.S. Air Force said its AC-130U, known as the “Spooky,” has returned stateside from its last scheduled deployment.

The 1st SOW said the Spooky will remain on alert in case troops need it for strike or overwatch downrange. But its return comes as the command gets ready to deploy the Spooky's follow-on model, the AC-130J Ghostrider.

The 4th Special Operations Squadron, part of the 1st SOW at the base, received its first upgraded J-model in March. While the command has had and operated the J-model since 2017, officials touted AFSOC's first plane with the Block 30 software upgrade. The improved Ghostrider arrived this spring.

The Block 30 model marks “a major improvement in software and avionics technology” over the AC-130J, which has the original Block 20 software, officials said in a news release in March.

“The Ghostrider is the newest and most modernized gunship in existence, fulfilling the same mission sets as the Spooky but with upgraded avionics, navigation systems and a precision strike package that includes trainable 30mm and 105mm weapons,” the release states.

The fourth-generation AC-130J is slated to replace the AC-130H/U/W models, with delivery of the final J- model sometime in 2021, according to the Air Force. Crews expect the J to be deployed in late 2019 or early 2020. The service plans to buy 37 of the aircraft.

The J-model also has improved turboprop engines, which reduce operational costs with better flight sustainability, the service has said. It has the ability to launch 250-pound, GPS– or laser-guided small-diameter bombs (SDB). The aircraft is expected to carry AGM-114 Hellfire missiles, interchangeable with the SDBs on its wing pylons, AFSOC has said.

The upgrades come as the service is looking to keep more aircraft “survivable” in multiple conditions.

“They're testing us every day — knocking our communications down, disabling our AC-130s, et cetera,” Army Gen. Raymond A. Thomas III said April 25 before an audience at the U.S. Geospatial Intelligence Foundation's GEOINT 2018 Symposium. Thomas, who commanded SOCOM since March 2016, retired this year.

As a result, crews began checking and cross-checking their data, including target information, before they locked on with their cannons, Palenske told Military.com.

“You make sure you're as precise as possible, only targeting the guys we've validated as bad guys,” he said, referring to operations in the Middle East where the gunships routinely flew countless missions, often with danger-close strikes.

“When there's some glitch being put out there by trons that threatens the accuracy of that, then the [AC-130 crews] have got to make sure they do no harm,” Palenske added.