You can run, but you'll die tired 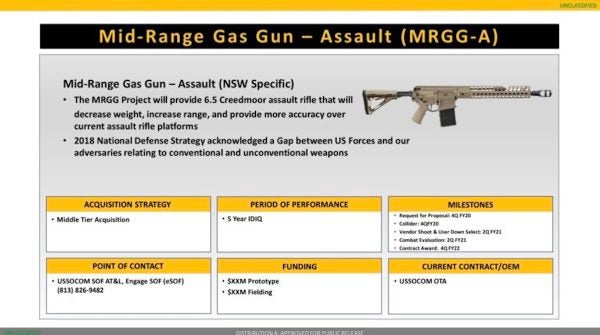 U.S. Special Operations Command will wait for the Army's 6.8mm rifle and automatic rifle, but it's moving forward to adopt a new sniper support weapon chambered in the longer-range 6.5mm Creedmoor round.

If all goes well with the Army's 6.8mm Next Generation Squad Weapon (NGSW) effort, special-ops weapons officials plan to field both variants to units such as the 75th Ranger Regiment after the service begins its planned fielding in fiscal 2023.

Program Executive Officer Special Operations Forces Warrior officials said recently that plans for the 6.5mm Creedmoor lightweight machine gun have been put on hold to see whether the NGSW can fill that role, but “we are pressing forward” with the sniper variant of the Mid-Range Gas Gun, or MRGG, chambered in 6.5mm Creedmoor, Col. Joel Babbitt, of PEO SOF Warrior, told defense reporters last week.

SOCOM intends to release a request for proposal to industry for 6.5mm Creedmoor ammunition in the fourth quarter of this fiscal year and hopes to award a contract in the first quarter of fiscal 2021, according to a PEO SOF Warrior slide presentation.

The request for proposals for the sniper 6.5mm Creedmoor MRGG is also expected to be released this fiscal year, but program officials don't plan on awarding a contract until the end of fiscal 2022, according to the presentation.

The Marine Corps also plans to replace its Mk13 Mod 7 sniper rifle, chambered for .300 Winchester Magnum, with the Mk22 MRAD.