Hands-on with the Barrett MRAD, the US military’s favorite new sniper rifle

Behold the glory of the MRAD. 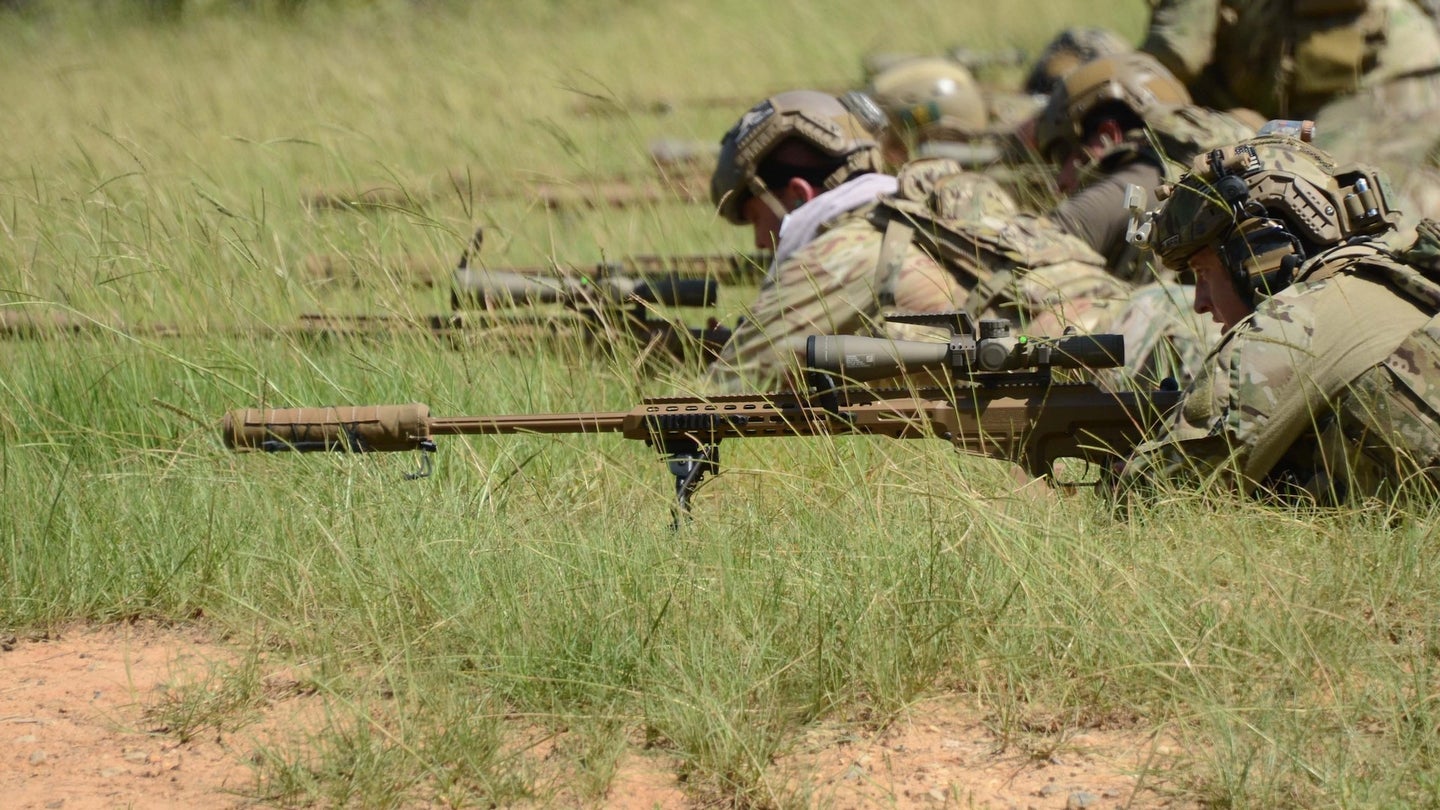 For decades, the US military has relied on a colorful constellation of sniper rifles to take out enemy combatants or anti-material targets at long distances. All service branches at one point or another have adopted multiple variations of the classic Remington 700, the much larger .50-caliber Barrett 82, or some other design to meet their precision fire needs.

In recent years, though, the U.S. military appears to have fallen in love with a brand new sniper system: the Barrett MRAD. At SHOT Show 2022, we had a chance to get up close and personal with the slick new system and get a sense of exactly what U.S. troops are in for in the coming years.

The Barrett MRAD, or Multi-Role Adaptive Design, is a bolt-action precision rifle with a multi-caliber chamber that — as confirmed by the multiple military contracts awarded to the Tennessee gunmaker — has not just met but surpassed the U.S. military’s expectations. Simple, dependable, and easy to personalize, the MRAD is constructed from lightweight steel and polymer, has an effective range out to 1,600 yards, field strips into six main components, and has fully adjustable features.

As Task & Purpose previously reported, the Army, Marine Corps, and U.S. Special Operations Command are all pushing to adopt the MRAD as a replacement for the existing sniper rifles in their arsenals.

The MRAD “underwent rigorous testing to Mil standards 810 G and H” at the Naval Surface Warfare Center, said Joel Miller, Barrett’s vice president of marketing and sales. “Rigorous accuracy standard testing. All that was done at their location and we successfully met or exceeded all those requirements.”

When asked what a shooter would like most about the MRAD, Miller said: “The accuracy. It’s sub-MOA. It’s very smooth. It has very low recoil, so you can get back on shot very quickly. So it’s an outstanding platform for what our US military needs for their engagement criteria.”

I got a chance to see what all the hype was about at the Boulder Rifle & Pistol Club in Boulder City, Nevada during SHOT’s media day the Monday before the convention. Here’s what I discovered.

On the range with the Barrett MRAD

When I first saw the Barrett MRAD, I saw a sleek and simple design; when I got behind the trigger, I found that it performed just as smoothly as it looked. In all, I probably shot about 15 rounds out of the MRAD and I got to see others shoot just as many. While that’s not enough to write a review or make me an expert on it, it is enough for it to leave an impression.

I met with Barrett representatives on the rifle range, located at the center of the club’s facility. The reps set up at the second shooting bench in a row of about a dozen. It’s one of the best rifle ranges I’ve seen. It’s a cement platform carved into a small dirt hill and covered by an aluminum roof. The elevated slab offers an awesome view of the open land and targets ranging from 200 to 1,000 yards.

The only rifle Barrett brought was their MRAD; the complete MK22 package, too. It was equipped with a Leupold Mark 5HD scope and Barrett’s titanium alloy AM-30 suppressor. I asked the rep if I could try it and he invited me to sit down. He asked if I knew how to use it and I told him to treat me like a noob.

I’ve written about guns for more than a decade now. I learned basic marksmanship skills in the Marine Corps, received additional weapons training at places like the O’Gara Training Facility and Gunsite, I’ve heard tons of expert instruction and opinion, and shot countless rifles, pistols, and shotguns. But whenever I come across a high-caliber rifle, a couple of things cross my mind.

First, I wonder what the recoil will be like. Shoulder pain, sure, but I actually think more about muzzle rise. I had a bad experience once. The first time I shot bench rest, I got hit with a scope right above my right eye and had to get stitches. Now, it’s something I actively avoid. And, second, I wonder if I’d get enough time to get into a comfortable shooting position.

As the Barret rep explained the MRAD’s operation, he had me cycle the action a few times so I got a feel for the bolt and trigger. The bolt was smooth. I could feel it glide through a polymer sleeve, but it needed a quick, little twist before it could close shut. I learned that because I tried to just shove it forward and it just sort of thudded against something inside the chamber.

Next, the rep held up a diagram of what I’d see inside the scope. It showed a Minute of Angle, or MOA, reticle – basically a series of crosshairs. A solid horizontal line with eight dotted lines below it. They were centered on another solid line cutting through the middle. He told me to use the dot that’s one down and to the right from the solid lines.

After that, he pointed at an orange silhouette target 700 yards out. He told me to aim the dot center mass on the target. He also explained that the target was synchronized with the tablet they had propped up on the table, so I’d get to see the impact immediately.

The rep loaded three rounds of .300 Norma Magnum into the 10-round magazine. Each time he pressed one of the dense bullets into the soft polymer slot, it made a muffled clicking sound. And, finally, he inserted the magazine for me.

I pulled the bolt back and then guided it forward. Sitting on the bench, I had trouble getting in a natural position. I’m 6-foot-2 and had to hunch down to look through the scope. I asked the rep to extend the bipod and he did. After that, all I had to do was sit there and pull the trigger.

With a bipod in front and sand sock in back, the rifle was stable. I grabbed the pistol grip and pressed my shoulder against the buttstock. While aiming at the target, I took a few slow, deliberate breaths. I waited for a natural pause and then pulled the trigger.

The recoil caused my sights to shift off target, but I really didn’t feel it. The push against my body was so insignificant that I have trouble recalling it. I’ve watched video of myself and others shooting. I saw the gun recoil. I saw it move and it moved a lot. It scooted back about an inch or two. I remember how thin the trigger felt against my finger, which was already sensitive from a couple of hours of shooting. I’m just saying the recoil wasn’t all that noticeable.

I pulled back on the bolt, ejected the empty casing, and threw it forward. The bolt clicked into place. I sighted in again, waited for that natural pause, and pulled the trigger.

I cycled the action for the third time and repeated my process.

Pew. Ping. Dead on again for a tight three-shot group.

I know what you’re thinking. That I have an expert-badge. I’m Carlos Hathcock reincarnated, right? Nah. I’m just some schlub they put behind the trigger. In other circumstances, I’d be a patsy. The reality is every aspect of the MRAD – the heavy fluted barrel, fully adjustable features, and streamlined design – was designed to improve the performance of both the shooter and rifle.

The Barrett MRAD and the US military

The MRAD has been causing a buzz across the entire U.S. military. In less than three years, the government has spent roughly $60 million on the rifle system and has already begun fielding it among special operations soldiers and sailors.

Starting in 2019, U.S. Special Operations Command awarded Barrett a $49.9 million contract for an unspecified number of MK22 rifle kits, which include the rifle and three barrels. In 2021, Barrett won a $10.13 million contract from the Army for 536 rifle kits, with plans on potentially purchasing thousands more, and the Marines reportedly plan to buy another 250 rifles for $4 million.

What’s gotten the military gushing is just how advanced the MRAD actually is. While you can adjust the trigger to your preferred pull weight, modify the manual safety for right- or left-handed operation, extend the stock and cheek rest to your liking, and even collapse the buttstock for storage, the highlight is a multi-caliber system.

Miller explained the primary chambering is .300 Norma Mag, but with a switch of a barrel and bolt head, the rifle can shoot .338 Norma Mag for anti-material engagement, and the cheaper and more plentiful 7.62×51 NATO round for training and urban combat.

“At the user level, you can interchange between any of those three calibers, and should a new caliber come up, for whatever reason that the U.S. military wants to move to, we have the capability to chamber this weapon system in that as well,” Miller said.

With the MRAD, Barrett seems to have found a reliable niche. While it’s a rifle they can change and upgrade to meet the whims of the U.S. military, what’s more, is it’s such a simple and accurate rifle that you can zero the scope, park almost anyone behind it, and watch them pick off targets 700 yards away.

Christopher Roberts, a precision effects capability developer with the Soldier Requirements Division at Fort Benning, Georgia, described the MRAD as the end of a one-size-fits-all sniper rifle in an article for the Fall 2020 issue of Infantry magazine. What he meant by that is for too long the military has limited troops with precision rifles chambered for a single cartridge.

Roberts argued there’s a need for a modular platform like the MRAD because it “allows the commander and his sniper team to change calibers dependent on the mission set.” The “mission,” as he described it, is facing not just enemy combatants but also “a sophisticated blend of drones, jammers, and long-range artillery.”

“With these weapon systems in place, the sniper team is better equipped than ever before. Incorporating updated (tactics, techniques, and procedures) and technology, the team will be able to conduct operations in all environments and against varying enemies,” Roberts wrote. “While snipers’ role in (joint all-domain operations) is ever-changing, they will be prepared to adapt to that change and destroy the enemy with overmatching capabilities.”