In a post-apocalyptic scenario where survival is dependent upon scavenging resources, it pays to be prepared. That’s the thinking behind... 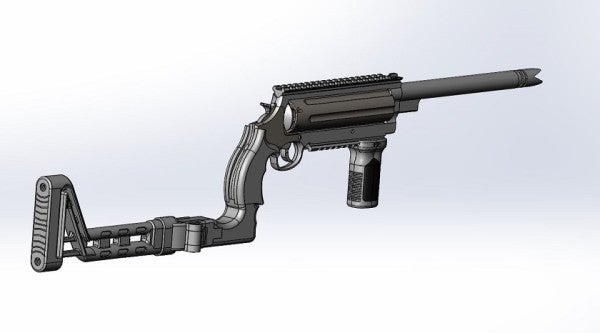 In a post-apocalyptic scenario where survival is dependent upon scavenging resources, it pays to be prepared. That’s the thinking behind Scavenger 6, a new rifle that can fire 21 different calibers of ammunition.

Though rifle hardly seems a fitting term, just look at it:

A rendering of Scavenger 6, a new firearm created by Tim Ralston.Image courtesy of Tim Ralston

It looks like a cross between a .44 Magnum and an M1A1 carbine, and the crazy thing is that’s not inaccurate.

Scavenger 6 was designed and created by Air Force veteran Tim Ralston, who rose to prominence as an inventor and survivalist after appearing on the National Geographic Channel’s “Doomsday Preppers,” a reality television show about post-apocalyptic scenarios and survival planning.

The rifle can fire 21 different calibers of ammunition just by switching out the cylinder barrel, referred to as a CB. However, Ralston notes that if there’s a specific caliber you want, it can be custom ordered, though there are some exceptions: No .50-cal ammo, guys, don’t be ridiculous.

Related: This Badass Tomahawk Will Make You Long For The Zombie Apocalypse »

“Because the cylinder and barrel are one, I can get really creative about boring out the cylinder to whatever I want,” explained Ralston.

According to Ralston, Scavenger 6 is designed to solve a specific problem that could arise in a post-apocalyptic situation: Ammo.

“Ammo’s going to be the number-one-sought-after commodity in a post-apocalyptic scenario,” Ralston explained to Task & Purpose.

Fortunately, the world’s not ending just yet, but that doesn’t mean Scavenger 6 isn’t useful.

In addition to the multi-caliber CBs, the rifle comes with standard CBs that are tailored to a specific caliber and can chamber six rounds of that size. So, say, for example, you’re a military aviator and you want a backup weapon in case you’re ever shot down behind enemy lines, you could get a CB that fires 5.56, one that fires 9mm, and another that fires 7.62. You can also customize Scavenger 6 for specific purposes. If you’re headed deep into the wilderness, you may want a .44 Magnum for putting down large animals that pose a threat, as well as a .22 for hunting smaller animals for food.

On top of firing 21 calibers with one weapon system, Scavenger 6 can mount a scope, a foregrip, and has a folding butt-stock. Ralston also has plans to add a mount for a strobe light and a laser on the foregrip.

The weapon is in its final stages, with the finished product expected mid-October. Ralston says he plans to officially put Scavenger 6 on the market by January 2017.

Let’s just hope the apocalypse doesn’t come before it goes on sale.