The Commandant of the Marine Corps is charging into the future, but some aren’t ready for change 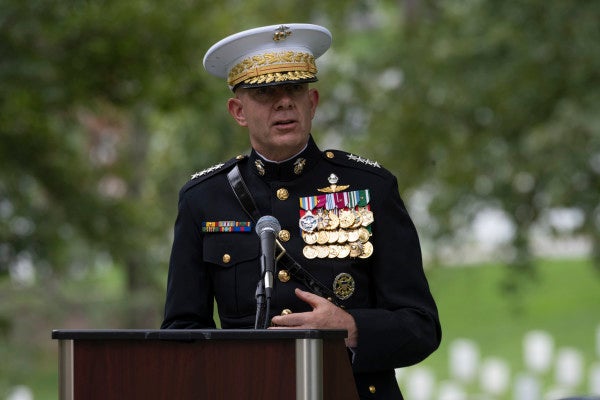 One thing that’s constant through most military organizations is reverence for tradition. The flip side of that, though, is a fear of change. It’s through that lens that many observers are viewing Commandant of the Marine Corps Gen. David Berger’s Force Design 2030. Some of that criticism comes from distinguished experts, like former Senator and Secretary of the Navy James Webb. But whether it be experts or the internet comments section, all of it comes with a dose of risk aversion and a sense that Berger is somehow ruining the Corps.

There are certainly big changes afoot. Much of the criticism surrounds the cuts Berger has outlined for the force. Most famously, there is the total elimination of Marine tanks. But there were far bigger victims to the ax — three infantry battalions, three tiltrotor squadrons, three heavy helicopter squadrons, two light attack helicopter squadrons, three military police battalions, and cutting tube artillery in favor of rockets, among others. Altogether, Berger’s proposed cuts amount to approximately 12,000 fewer Marines by 2030.

Whether this gamble succeeds depends on how well the Marine Corps survives the bureaucratic knife fights in the five-sided puzzle palace and on Capitol Hill. For its size, the Corps has had remarkable success in pushing its priorities over the years, from its very survival back in the 1950s to fielding the MV-22 Osprey and the short takeoff version of the F-35, so it’s not unreasonable to think that this is a well-calculated risk.

But most of those upset over the Force Design effort care little about the budget battles surrounding it. They’re generally upset about how Berger has refocused the Corps to support a naval strategy in the Pacific that is focused around China.

His new strategy should be familiar to students of Marine Corps history — seizing islands in the Pacific to serve as bases from which to strike the enemy. The twist is that now it’s called Expeditionary Advanced Base Operations (EABO), and the Marines will use weapons such as Tomahawk missiles and eventually future systems to threaten enemy shipping and other targets.

After spending the post-Cold War era split between Marine Expeditionary Units (MEUs) answering 911 calls from embassies and operating out of Forward Operating Bases (FOBs) in Iraq and Afghanistan, this is a major adjustment.

Many critics are especially upset about the Marine Corps returning to its naval roots, as if that’s a problem. In fact, it’s the law. Since 1956, Title 10 has assigned the Marine Corps’ primary mission, “The Marine Corps shall…provide fleet marine forces of combined arms, together with supporting air components, for service with the fleet in the seizure or defense of advanced naval bases and for the conduct of such land operations as may be essential to the prosecution of a naval campaign.”

It “…shall perform such other duties as the President may direct. However, these additional duties may not detract from or interfere with the operations for which the Marine Corps is primarily organized.” So all the other things the Marine Corps does that aren’t part of naval campaigns, like working out of FOBs 500 miles from water, are actually the distractions.

Taking the Marine Corps back to its heritage as “soldiers of the sea” is not a demotion. It doesn’t take a Ph.D. in military history to see that the U.S. is a maritime nation — just look at a map. As the world’s center of gravity shifts to the Asia-Pacific and America’s priorities shift towards deterring the Chinese, being able to support naval campaigns is going to be a growth business.

And that is what the Corps is banking on. While the results of its Force Design studies are somewhat controversial, what is inarguable is that the Corps has set a course forward that is uniquely in keeping with its history and core competencies. Who but the Marines should be the ones seizing and fighting from Pacific islands?

The Force Design process is still ongoing. Not even Berger knows exactly where it will end up. The war games and simulations have already told him that the way the Corps was doing business wouldn’t survive in a high-end fight. Finding out what will is going to take more study and experimentation. The Corps has already started standing up the first of three Marine Littoral Regiments, helping develop the weapons and tactics needed to fight and win under the new operational concept. More experiments are certain to come, and Marines and former Marines hoping for another 245 Marine Corps birthdays should welcome them.

Most people appreciate that the services are always competing with each other for publicity, prestige, and ultimately resources. Just as a small business doesn’t try to sell the same goods as a much larger business, the Marine Corps can’t sell itself as another army, just with a tougher boot camp and better uniforms. It needs to differentiate. Unless it offers the nation something different than the Army, the Corps’ existence is in peril. America can barely afford one Army, much less two.

The Marine Corps can’t out-armor the Army. It can’t out-artillery the Army. Thankfully, it certainly can’t out-MP the Army, nor should it try. But it can out-Marine the Army. Throughout its history, the Corps has had to periodically reinvent itself to maintain its relevance. As America pivots from hunting insurgents in the desert to eying Chinese moves in the Pacific, it’s again one of those times. As Army Gen. Eric Shinseki once said,” If you don’t like change, you’re going to like irrelevance even less.”

Let the Army worry about fighting land wars in Asia — everyone knows that’s a classic blunder. The Marine Corps, along with its sister service, the Navy, can concentrate on winning them at sea.