Scheller has admitted to 'serious misbehavior, as opposed to just merely inappropriate or merely in poor taste.' 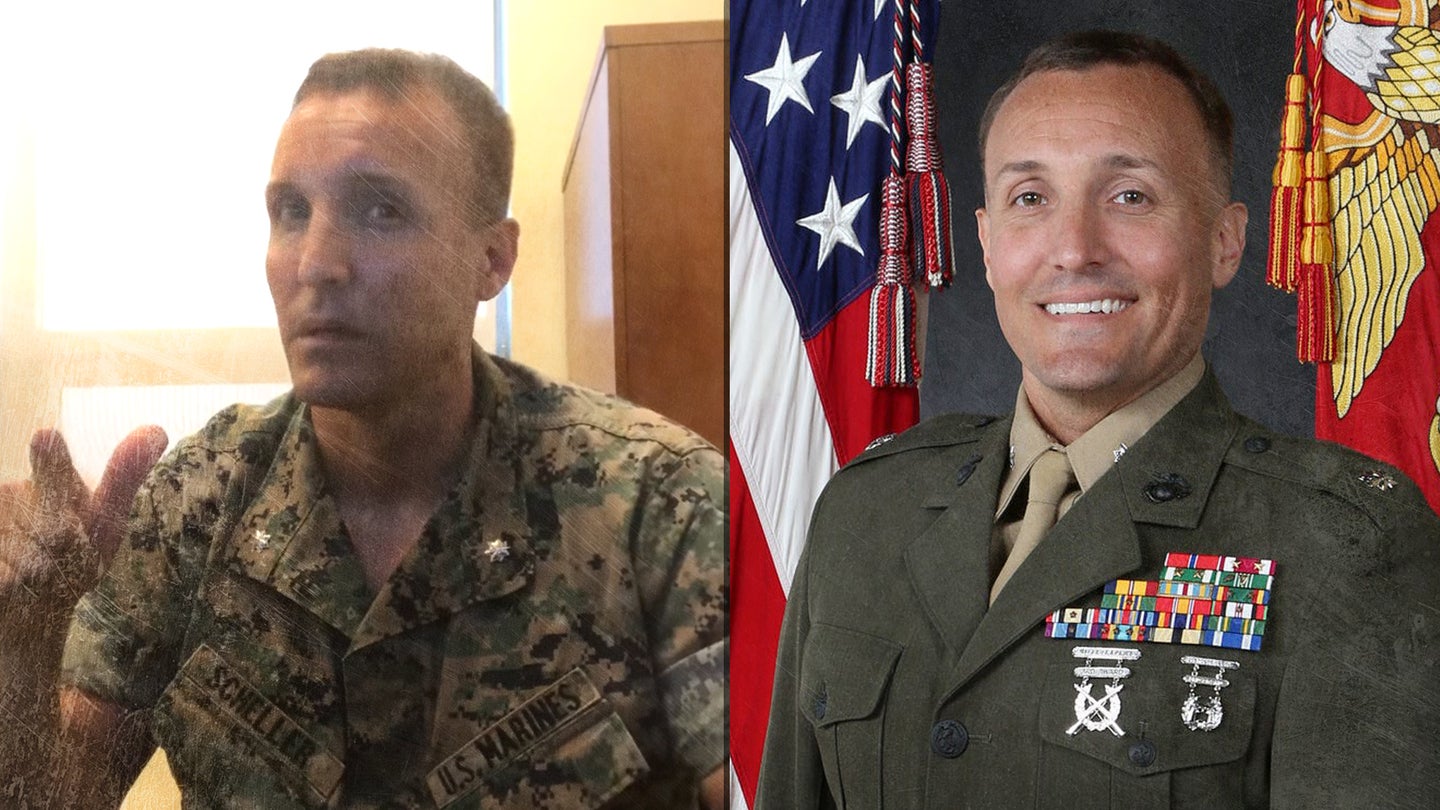 Marine Lt. Col. Stuart Scheller was found guilty on Thursday of numerous charges in connection with his very public battle with top military and civilian leaders that began over the Afghanistan withdrawal and then morphed into a grudge match over “the system,” a Marine Corps spokesman said.

The military judge hearing the case accepted Scheller’s plea of guilty on Thursday. He faces sentencing this afternoon and the maximum punishment that Scheller could receive would include a letter of reprimand and forfeiture of two-thirds of one month’s pay for a year, the spokesman said. He has also requested to leave the Marine Corps, but the type of discharge he will receive will ultimately be decided by the Navy secretary.

Prosecutors charged Scheller with several offenses under the Uniform Code of Military Justice for comments that he has made since Aug. 26, when he first posted a video on Facebook and Linkedin demanding that senior military leaders face consequences for their failures in Afghanistan.

His charge sheet, which was obtained by Task & Purpose, is six pages long and lists everything he has said that has incurred the wrath of his superiors.

Scheller first made waves on Aug. 26 when he posted a video to social media in which he argued that military leaders had not been held accountable for mistakes they made during the Afghanistan withdrawal. The video was posted the same day that 11 Marines, one Navy corpsman, and an Army special operator were killed in an attack on the Hamid Karzai International Airport. In the video, Scheller said that he had a “personal relationship” with one of the fallen service members but did not specify whom.

“I’m not saying we’ve got to be in Afghanistan forever, but I am saying: Did any of you throw your rank on the table and say ‘hey, it’s a bad idea to evacuate Bagram Airfield, a strategic airbase, before we evacuate everyone,’” Scheller said in the video, which was shared to both Facebook and LinkedIn.

“Did anyone do that? And when you didn’t think to do that, did anyone raise their hand and say ‘we completely messed this up.’”

That initial video set off a frenzy of responses, and ensuing media coverage. Scheller earned praise for risking his career just a few years short of retirement to say what many service members, veterans, and military families were thinking as they watched the Taliban overrun Afghanistan, resulting in the humanitarian catastrophe at Hamid Karzai International Airport.

But others saw Scheller as a rogue Marine officer who broke with established norms and brazenly criticized military leaders while in uniform.

That simple narrative — that Scheller was either a solitary Marine speaking truth to power, or a disobedient officer — quickly became much more complicated. The day after he made his first video, he announced that he had been relieved as battalion commander for Advanced Infantry Training Battalion at School of Infantry East at Camp Lejeune, North Carolina.

Then he made an Aug. 29 video from inside a refurbished school bus in which he announced he intended to resign his commission and he urged his followers, “Follow me and we will bring the whole f–king system down.”

As his messages grew in frequency, they became more brazen than that opening salvo of criticism he levelled at military leaders on Aug. 26, and the rhetoric took on a tone that the Marine Corps found alarming.

On Aug. 31, Scheller claimed on Facebook and Linkedin that Marine Corps Commandant Gen. David Berger wanted to court-martial him. Those posts were later deleted.

Scheller then announced in a Sept. 16 video that he intended to file charges against Marine Gen. Kenneth McKenzie Jr., head of U.S. Central Command, in connection with the deaths of 13 service members who were killed in the Aug. 26 suicide bomb attack at Hamid Karzai International Airport’s Abbey Gate.

Eventually, Scheller was placed in the brig for continuing to post on social media despite being ordered to stop.

Legal documents obtained by Task & Purpose show that Marine Corps officials were concerned with Scheller’s repeated calls for starting a revolution, which a command investigation found violated the Defense Department’s policy that lists which acts of protest and dissent that service members are not allowed to engage in.

Scheller’s comments about fighting the system were not limited to social media, according to a copy of his charge sheet that Task & Purpose obtained. To wit: Prosecutors claim that at one point Scheller wrote on a transition plan form that his desired career field was “Revolution,” adding: “I reject your system. I plan to change the system;” and, “every generation needs a revolution. It is time for change.”

If the military judge approves Scheller’s guilty plea, sentencing is expected to begin later on Thursday.

In a legal document accepted by the military judge hearing the case on Thursday, Scheller acknowledged that he had been disrespectful to Berger and other Marine Corps officers.

“Under the circumstances, my behavior was disrespectful and contemptuous to General Berger—including my ascribing motivations to the Commandant wanting to court-martial me that were speculative and without merit and inappropriately demeaning General Berger by publicly claiming to outmaneuver him,” Scheller wrote in a stipulation of fact, a copy of which was obtained by Task & Purpose.

Moreover, Scheller conceded that it was wrong for him to appear in uniform and identify himself as an active-duty Marine Corps officer in his social media posts that criticized senior military and civilian leaders, such as in his Sept. 16 video vowing to charge McKenzie.

During that video, Scheller also announced that he was asking for donations through the Pipe Hitter Foundation to help his family and pay for his legal fees. The foundation was created by Navy SEAL Chief Eddie Gallagher and his family.

“These actions were wrongful, and they both solicited funds from the public that is beyond the military base community and created a public event that would compromise the dignity of the Marine Corps uniform,” Scheller wrote. “It was wrongful because a basic tenant is to not use my public office as a Marine officer for private gain by raising money for my family or private ventures and because I personally had no detailed information related to the alleged violations of the UCMJ [Uniform Code of Military Justice] that I publicly proclaimed against a geographic combatant commander.”

Those comments include his written answers on the transition form as well as a conversation with his battalion executive officer shortly after he was relieved of command, in which he is accused of saying: “I am going to burn the system down. What if the guys in January were not a bunch of p—ies, but they were guys that knew what the f—k they were doing? They couldn’t stop us. What could they do?”

Timothy Parlatore, one of Scheller’s defense attorneys, has previously said that Scheller was not expressing support for the people who took part in the Jan. 6 Capitol Hill riot, rather his client was commenting about how weak security at the Capitol building was at the time.

In the stipulation of fact, Scheller described all his comments as “serious misbehavior, as opposed to just merely inappropriate or merely in poor taste.”

“All of the alleged bullets charged in this specification reflected indecorum and lawlessness that was morally unfitting and unworthy of being an officer,” Scheller wrote.

While Scheller accepted responsibility for his statements, he also defended his original intent for speaking out.

“I believed general officers failed to hold themselves accountable,” Scheller told a military judge on Thursday. “I made what I believed to be true statements about their incompetence. It is disrespectful to point out their professional failures. Doing so detracts from the respect their positions demand.”