"I regretfully — yet resolutely — tender my resignation." 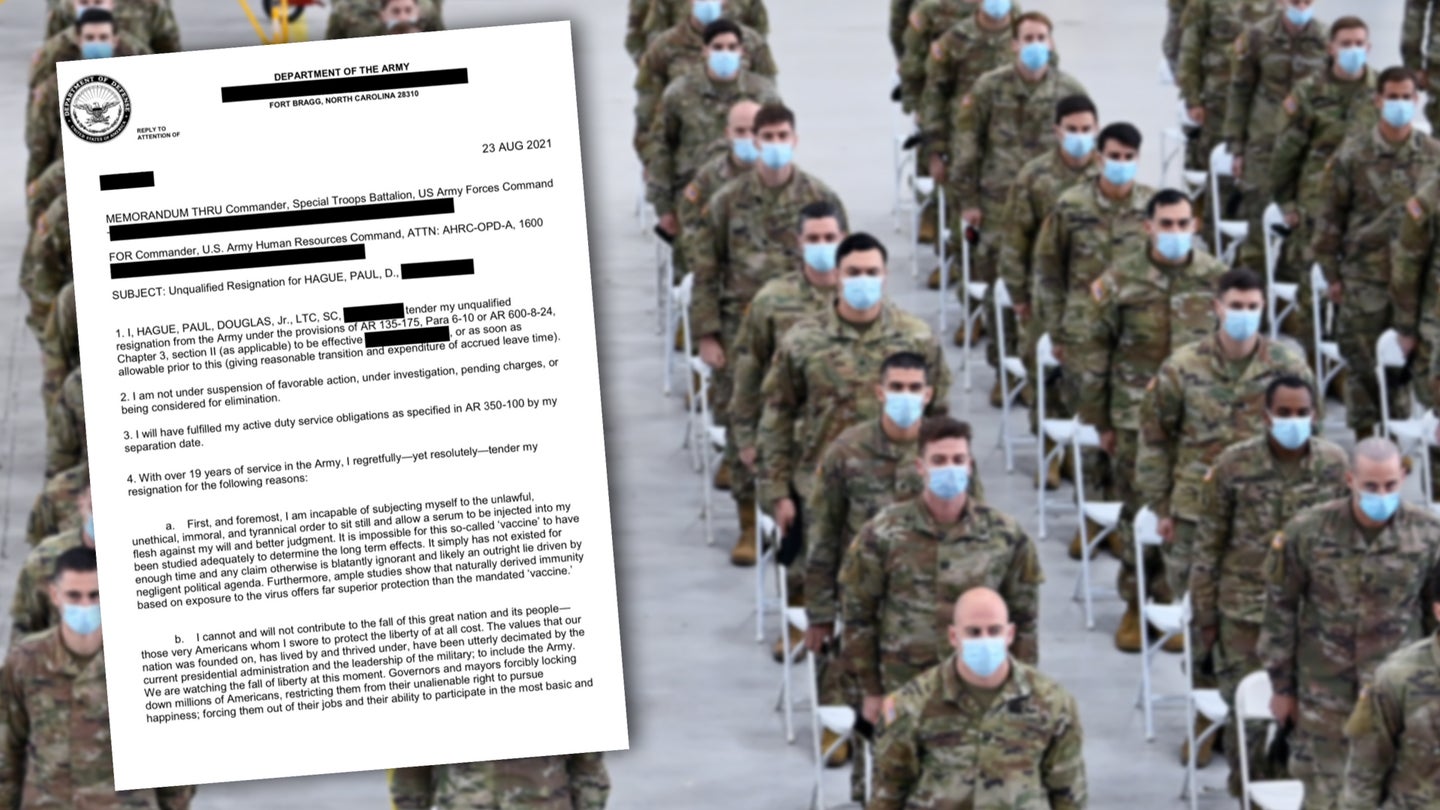 After a supposed resignation letter from an Army lieutenant colonel criticizing the U.S. military’s vaccine mandates and related “ideologically Marxist takeover of the military” made the rounds on social media and was viewed by tens of thousands of people, the Army has decided to say nothing about it.

“I am incapable of subjecting myself to the unlawful, unethical, immoral, and tyrannical order to sit still and allow a serum to be injected into my flesh against my will and better judgement,” Lt. Col. Paul Hague, a signal officer assigned to the Army Reserve Command at Fort Bragg, North Carolina, wrote in a resignation letter posted to Twitter by his wife last week. “It is impossible for this so-called ‘vaccine’ to have been studied adequately to determine the long-term effects.”

The claim that the novel coronavirus (COVID-19) vaccines haven’t been thoroughly tested is false and one of many popular conspiracy theories and myths about the vaccines that continue to spread in the ranks. More than 178 million Americans are now fully vaccinated, according to the Centers for Disease Control and Prevention. A CDC study published in August found that unvaccinated people were 29 times more likely to be hospitalized with COVID-19 than people who were fully vaccinated.

Neither Hague nor his wife, Katie Phipps Hague, have responded to repeated requests for comment from Task & Purpose.

The Army has refused to comment on the widely-publicized letter, or even confirm whether it is genuine, citing privacy concerns for the officer. While the Army does not typically go into specific detail regarding personnel issues, the service regularly comments on personnel matters or confirms they are aware of a situation.

In June, the Army Reserve confirmed that they were “investigating” a first lieutenant after he was seen campaigning for political office in uniform and heard saying in an interview that he doesn’t think “this sleepy guy in office” President Joe Biden is actually the president. Last year, the Army confirmed they were “taking immediate action” after a lieutenant posted a Holocaust joke on TikTok. And when a news report revealed an Army officer was allegedly carrying out affairs with multiple women, the Army confirmed it was aware of the allegations and was investigating.

The Army’s approach to providing information has been criticized internally by its own public affairs officers. Three Army public affairs officials told Task & Purpose in June that the service often fails to proactively communicate, hoping instead that what is seen as a bad news story will go away if it’s not acknowledged.

Since Hague’s resignation letter was posted on social media by Phipps Hague, there has been no shortage of criticism, including accusations that the memo is fake. But Phipps Hague sought to put those accusations to rest in another statement posted to Twitter on Monday, which has since been deleted, saying her husband “tendered his resignation on the 30th of August,” and it has since been “sent up his chain of command — everyone who needs to see it has seen it and is aware of it.”

“[I]t is important to us that people not think that this story is fabricated,” Phipps Hague tweeted. “It is very real.”

It’s unclear where Hague is in the resignation process. A military service record provided by Army Reserve Command says he is still in the Army Reserve.

Hague joined the Army on May 11, 2002, according to his records, and left active duty on Feb. 6, 2008. He joined the Army Reserve months later in December 2008. He deployed to Iraq for 13 months in October 2003, and again for 15 months in June 2006. Among his military awards and decorations are the Army Commendation and Army Achievement Medals, Afghanistan Campaign Medal with three campaign stars, and the Ranger Tab.

Despite being roughly a year from retiring with a full military pension after 20 years of service, Hague said in his resignation letter that he will instead “join those who have served before me in pledging my life, my fortune, and my sacred honor to continue resisting the eternal and ever-mutable forms of oppression and tyranny — both from enemies outside our nation’s borders, and those within.”

Hague said he was resigning “[f]irst, and foremost,” because of the mandatory COVID-19 vaccine. The COVID-19 vaccine developed by Pfizer recently became mandatory for U.S. service members after receiving full approval from the Food and Drug Administration. The vaccine joins over a dozen other mandatory vaccines that troops are required to get upon joining the military.

When asked on Twitter why her husband did not leave the military over other vaccines he was required to have, Phipps Hague tweeted that he “didn’t resign over a vaccine. He said he felt the vaccine was being used as a political tool to divide and segregate Americans.”

Although Hague’s memo mostly concerns the vaccine, he also mentions the withdrawal from Afghanistan, which he calls “sudden and rash, at best, but pushing traitorous.” He voices concerns that “appropriate screening of personnel could not have taken place … potentially leading to transporting threatening terrorists to friendly nations, including the United States.”

In fact, the screening process for evacuees from Afghanistan is extensive and includes biometric screening and running individuals’ information across multiple government agencies and the National Counterterrorism Center. Pentagon spokesman John Kirby previously said that intelligence and law enforcement personnel were at third-party country sites, where most refugees were taken immediately after leaving Afghanistan, to undergo that vetting process and ensure “that nobody comes into the United States that hasn’t been screened in a robust manner.”

Hague also cited what he says is an “ideologically Marxist takeover of the military and United States government at their upper echelons” as a reason for his resignation. The comment echoes remarks made by Air Force Lt. Col. Matthew Lohmeier who is being investigated by the Air Force Inspector General after self-publishing a book which claims Marxism is spreading in the military.

The Hague memo was posted to social media days after a Marine lieutenant colonel filmed a video critical of the Afghanistan drawdown and demanded accountability from senior military leadership for the way the withdrawal was handled.

“I’m not saying we’ve got to be in Afghanistan forever, but I am saying: Did any of you throw your rank on the table and say ‘Hey, it’s a bad idea to evacuate Bagram Airfield, a strategic airbase, before we evacuate everyone?’” Lt. Col. Stuart Scheller said in the video. Scheller was relieved from command, and days later made a second, lengthy video announcing he’d be resigning his commission and planned to “bring the whole fucking system down.”

In a Facebook post on Aug. 30, Phipps Hague said she “just finished reading over” her husband’s resignation memo, and said while her husband began the resignation process before learning about Scheller’s comments, “it is encouraging to see that others are speaking out even at great personal risk.”

“Not everyone … feels compelled to join him,” Phipps Hague said. “But a lot of people are, and I hope that my husband’s resignation will help others speak out if they see what LTC Lohmeier, LTC Sheller, and others see.”

Update: This story was updated at 11:15 a.m. on Sept. 14, 2021, to correct information regarding Lt. Col. Hague’s service and deployments. Following publication of this story, the Army Reserve acknowledged to Task & Purpose that the information they’d previously provided was incorrect. The corrected information is as follows: Hague left active duty on Feb. 6, 2008, not Jan. 29, 2008, and joined the Army Reserve in December 2008, not June 2008. He deployed to Iraq in October 2003 and June 2006, not September 2007 and November 2014.