Chicken soup and bedsheet camouflage: Battle of the Bulge veteran shares his story of historic fight 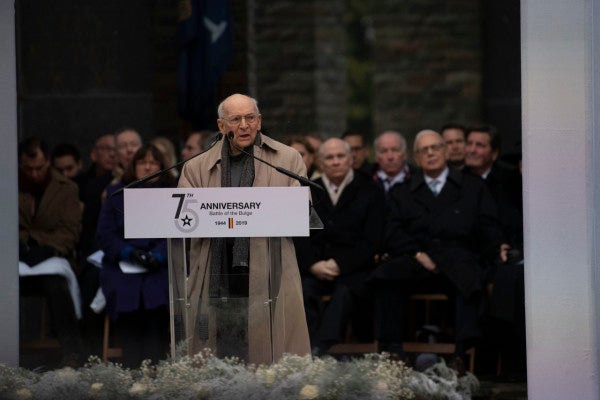 An Army veteran of the Battle of the Bulge made the history books come alive with his short speech during a 75th anniversary commemoration in Bastogne, Belgium.

Malcolm “Buck” Marsh Jr., who spoke at the event yesterday, was a soldier in the 36th Armored Infantry Regiment when the Nazis attacked on Dec. 16, 1944. His unit was part of the 3rd Armored Division and it was rushed in to stop the German onslaught.

The facts sound dry: Americans outnumbered five to one, the coldest winter in the region in decades, little food, inadequate clothing, shortages of medicine and ammunition.

But Marsh, now a spry 95, put all that in context just by mentioning chicken soup and bedsheets.

“It's great to be here,” Marsh said at the start of his speech. “I'm very glad to be not digging foxholes.”

Marsh said he had “fond and not-so-fond” memories of his time in Belgium in 1944 and 1945. He spoke of a fond memory of an unnamed Belgian woman. Marsh's unit was in a small town. He and a buddy were on guard duty and the rest of the platoon was in houses. The cold, he said, was intense, and it was in the midst of a blizzard. “This Belgian lady, with a shawl on, came out with two mugs of hot chicken soup for us,” he said. “It was the best meal I got — I guess ever.”

Another time, Marsh was assigned to be part of a four-man patrol probing German lines. The Americans didn't have white camouflage outfits to wear as the Germans did, so the Belgians stripped their bedsheets to give the G.I.s a fighting chance.

“One of my friends was tying me into the sheet and laughing a bit,” Marsh said. “I asked him what was up. And he said to turn around. There was about four feet of sheet trailing behind me. I looked like a bride.”

Bride or not, it worked. Marsh and his friends passed a German platoon moving to attack his unit and they were never spotted.

World War II reenactors and a simulated snow shower are part of the ceremony for the 75th anniversary of the Battle of the Bulge, at the Mardasson Memorial, Bastogne, Belgium, Dec. 16, 2019 (DOD, Lisa Ferdinando)

This type of story doesn't make it into history books. Field-expedient camouflage shows how adaptable the American forces were. The fact that a mug of hot soup is still the best meal the young Alabamian had, says a lot about the cold and snow that the young soldiers endured.

Army Maj. Gen. Brian Winski, the commander of the 101st Airborne Division based in Fort Campbell, Ky., brought about 80 soldiers from the unit to Bastogne for the commemoration. In 1944, the 101st was rushed to the crossroads city and surrounded by the German push.

The soldiers that Winski brought got the opportunity to speak with the war veterans and hear their stories. “We specifically brought young soldiers to this so they could get the stories first hand,” Winski said. “One of them in 25 years, could be the division sergeant major and will be able to pass those stories on. It's important.”

Marsh ended his talk at Bastogne by thanking the people for letting him tell his stories and then asked all “to pray for world peace.”