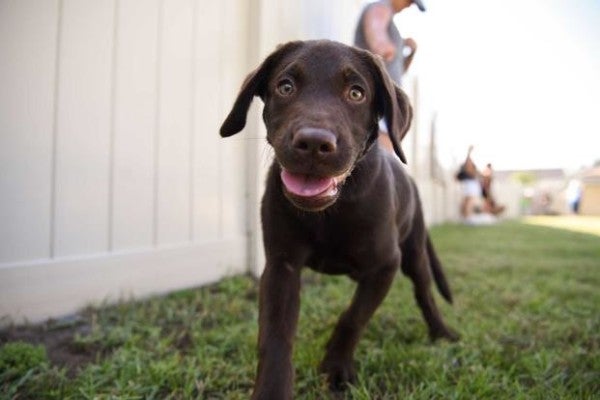 Lawmakers and veterans advocacy groups are ready for change after waiting nearly a decade for the Department of Veterans Affairs to change its policy on not reimbursing service dogs for veterans suffering from post-traumatic stress disorder.

The Puppies Assisting Wounded Servicemembers, or PAWS, Act would require the VA to offer $25,000 vouchers to veterans suffering with PTSD for use at qualifying nonprofits. Currently, the VA only supports service dogs for use in mobility issues, not in cases that only involve mental health conditions.

In 2010, Congress mandated the VA study the use of service dogs for PTSD and other mental health problems. But the pilot was suspended twice when two service dogs bit children and some dogs experienced health issues. The department has since started the study back up, but the results won't be published until next year.

“Veterans with PTSD may have left the battlefield, but they are still in a tough fight,” Fischer said in a news release. “Service dogs can provide support, peace, and joy to these Americans as they confront the invisible scars of war.”

These grants would help expand the reach of nonprofits currently training and connecting service dogs to veterans with a mental illness, often for free.

The act so far has a bipartisan group of 37 cosponsors. But a similar bill introduced three years ago didn't get out of committee.

For Rory Diamond, CEO of one of the K9 for Warriors, one of the largest nonprofits that would be affected by this legislation, it's taken the VA too long to change its policy that “there is not enough research to know if dogs help treat PTSD and its symptoms.”

“People are always asking me what is it the dogs actually do,” Diamond said. “The genius of the dog, or the magic, is it gets the warrior out the front door. You have a reason to get up in the morning because the dog needs to be fed and walked.”

The service dog can also help a veteran feel secure in a crowd, he added, and help them get a better night's sleep by waking them up at the first sign of a nightmare.

Dogs alone do not necessarily cure veterans, but recent studies from the Purdue College of Veterinary Medicine and the National Institutes of Health showed service dogs have had a positive effect.

“Now we have a growing body of research that says the VA needs to do this. That the dogs are working,” said Diamond, whose organization helped with one of the studies. “We did rigorous studies on our warriors, and it was published in a prestigious journal, peer reviewed. It's not made-up monkey science. It's just real science.”

A VA spokesman said via email the department does not take positions on research done by groups outside of their purview.

“We strive to complete research at VA according to the highest ethical and scientific standards with a focus on the safety of Veterans and their families,” the official said.

The VA's first report will be released early summer 2020 and will address whether service dogs or emotional support dogs helped veterans with PTSD. The second part, to be released about six months later, will report whether the kind of dog factored into “health economics savings,” which would be factors like reduced hospital stays and reduced reliance on medication.

The VA has not yet taken a position on the PAWS Act.

“The need is so high,” Diamond said, “and these dogs are saving lives in the face of a veteran suicide crisis.”