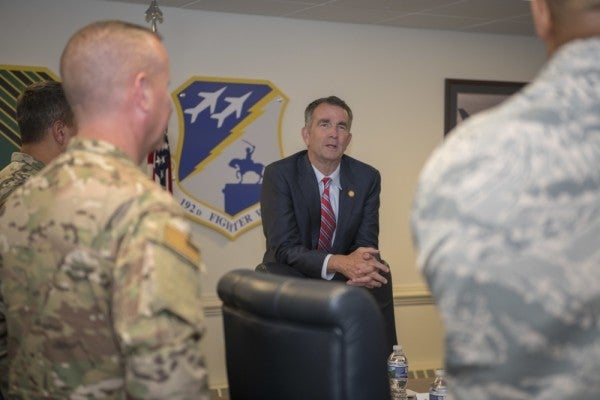 Social Services departments in two Tri-City area localities and two local hospitals will be taking part in a statewide pilot program aimed at preventing suicides among military service members, veterans and their families.

Last week, Gov. Ralph S. Northam announced the launch of the “Virginia Identify, Screen and Pilot” program that will run into September, according to a news release from the governor's office. The goal of the program, according to the release, is to get military- and civilian-related healthcare providers working together to eliminate duplicity and gaps in community programs and services offered to military families.

“It is essential for local agencies to be a part of this mission,” state Secretary of Health and Human Resources Daniel Carey said in a statement from the governor's office. “This program will help build infrastructure to serve our military and veteran citizens and gather data on what resources we will need to sustain these essential services.”

Carey pointed to statistics claiming that 70% of veterans who take their own lives were not connected to any kind of Veterans Administration healthcare programs at the time of their deaths.

John Randolph Medical Center in Hopewell and Poplar Springs Hospital, a mental-health facility in Petersburg, are two of the 15 hospitals statewide that will take part in the program.

“As an Army veteran, I know firsthand the challenges that our service members may face while on active duty, in their transition to civilian life, and beyond,” Northam said in the statement. “That's why I've made it a priority to ensure Virginia is equipped to provide quality behavioral health and supports, and that our veterans have access to them. This pilot program will help save lives, and it will help service providers better understand the needs of service members, veterans, and their families.”

In January 2019, Northam said Virginia would be one of seven states participating in the inaugural “Governor's Challenge to Prevent Suicide” among military-related families. Since then, Virginia's interagency team has trained more than 500 community service providers in military cultural competency and suicide prevention, while also hosting six statewide Military Culture and Suicide Prevention summits.

Military service members, veterans, and family members who are in crisis or having thoughts of suicide—and those who know someone in crisis—can call the Suicide Prevention Lifeline at 1- 800-273-8255 (Veterans and caregivers, press 1) for confidential support 24 hours a day, 7 days a week, and 365 days a year.