"I feel really good about being there, and that's my ambition right now: to keep everything stable." 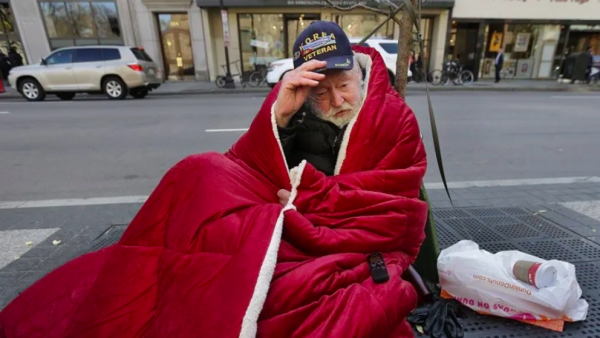 Jack thought his life was over. Homeless and suffering from a congenital medical issue that caused a lack of blood flow to one side of his head, the pain was immense — insurmountable, he thought.

“I basically made a deal with myself: I'll make it through today and tomorrow I'll kill myself,” said the Santa Fe resident and Navy veteran.

But Jack, who asked that his last name not be used for this story, found help. He met John Herman, a social worker with the Department of Veterans Affairs responsible for helping homeless vets obtain housing. Now, Jack has a roof over his head — something Herman said every veteran deserves.

“I think if you serve your country, your country owes you something,” Herman said. “They serve, so now we serve.”

Herman — the VA's sole representative in Santa Fe tasked with housing homeless vets — said the number of veterans without a place to live has “dropped significantly” in recent years — a bright spot in a city grappling with the difficult problem.

Though community leaders acknowledge homelessness is a problem in Santa Fe, the news is considerably brighter for veterans. Since 2017, the city has been considered “functional zero” — meaning it has consistently been able to provide housing to any homeless veteran within a 90-day period, said Hank Hughes, executive director of the New Mexico Coalition to End Homelessness.

Today, organizers at the coalition say there are between five and 10 homeless veterans in Santa Fe at any given time — a number Hughes called “very small” compared to previous years.

“Veterans used to be a very significant part of the homeless population and now they're much smaller,” he said, largely crediting an Obama administration effort to implement a collaboration between Veterans Affairs and the Department of Housing and Urban Development to provide housing vouchers to veterans experiencing homelessness.

“I think we should be very proud of the effort that's been made,” Hughes added, noting Santa Fe and Las Cruces are the only cities statewide that have achieved functional zero status.

“We're housing them. It's working,” agreed Herman, who, with the help of other agencies in town, has housed an estimated 75 homeless veterans since he began helping seven years ago.

However, “that doesn't mean the problem is solved,” he said. “There's still more work to do.”

Herman said Santa Fe still must grow its affordable housing market and increase efforts to lower the risk of homelessness before it occurs. Hughes' goal is for the city to house vets within a 30-day period rather than 90 days.

Santa Fe's tight housing market only adds to the difficulty for once-homeless vets like Jack, who found shelter in December 2016 after experiencing homelessness for about a year.

“Without Section 8 housing, there's no way I could afford rent now,” said Jack, referring to the federal housing assistance program that pays private landlords the difference between what a low-income tenant can afford and the set rental rate.

Jack, who is 55 and served in the Navy for six years in the 1980s, said he receives $771 a month from Social Security — an income far lower than the monthly rent for most units in Santa Fe. With the help of his Section 8 voucher, he pays nearly 30 percent of his income to afford his $750 unit on Airport Road.

The New Mexican reported in December that St. Elizabeth Shelter has sent a handful of homeless veterans out of town — even out of state — to get housed, mainly because of high rental rates. While Herman said he's never experienced this problem — his vouchers are only valid in Santa Fe — “it's been difficult to house anyone in Santa Fe because the housing stock is not meeting demands.”

In the past, there were several options for his clients to choose from, whereas today, “it can take months” for a unit to open up, he said.

Staci Pennartz, the Albuquerque-based homeless veterans reintegration program manager for Goodwill Industries, agreed Santa Fe's housing market for low-income veterans “can be difficult at times.” She said there have been instances when she's had to relocate vets in Santa Fe to Albuquerque — but to access other resources, such as behavioral health counseling, rather than to find housing.

In her program, “any veteran who has sought housing has been able to get housing here,” she said.

Jeff Campbell, an Army veteran who calls the VA program “an absolute angel in my life,” said it took about six months to obtain housing after meeting Herman. He has been in his apartment on Rufina Street for about two years.

Campbell had previously been homeless in Santa Fe after a falling out with his family in the mid-2000s, and he became homeless again about a decade later.

“Talk about feeling like you've come a long way,” Campbell said, noting he lives in an apartment complex filled with people who share his life experiences and behavioral health issues. “I can literally say that I would not be alive and well if it had not been for . … I feel really good about being there, and that's my ambition right now: to keep everything stable.”

Once a person is housed, Herman checks on them once a week for the first month or so, then checks in about once every three months. During these meetings, he connects people to counseling services, benefits and medical assistance. He helped Campbell enroll in Medicare, and Jack, who later found out he has bipolar disorder, enroll in Medicaid.

To help people reach that long-term sustainability “is solving the whole problem, not just providing the apartment,” Herman said.

Pennartz said her program, which is funded through the U.S. Department of Labor and served more than 270 people in 2018, aims to help veterans find employment and gain life skills necessary to sustain their housing. She said “there's been a shift” that allows agencies to work collaboratively toward prevention rather than reacting to homelessness after the fact.

Veterans, including Jack, say these efforts give them hope and allow them to feel human.

“One of the things about becoming poor is the way people respond to you, when you're really scraping the barrel for benefits and having to sign up for food stamps. People are not very compassionate. It's hard to explain,” Jack said. “Especially when your self-image is that low already, then to be treated like a second-class citizen is pretty soul crushing. [Herman] was the one person who really showed me compassion in a way that I could still respond to.”

The impact has been so profound that Jack said he hopes to one day serve veterans just as he has been helped.

“I know what it's like to be hopeless. I know how I got through it and how I survived, so I want to help other veterans in the same way,” he said.

Housing, he added, “gave me something to look forward to again. I've never felt helpless again.”