This California community is a model haven for homeless veterans. Now the VA is shutting it down

For six years, dozens of homeless veterans have recovered from trauma in nine cottages along a winding residential road in Echo Park, California 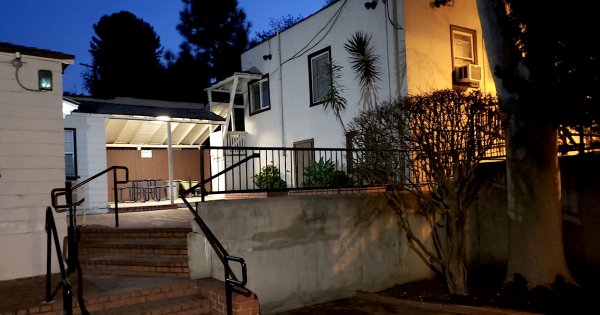 For six years, dozens of homeless veterans have recovered from trauma in nine cottages along a winding residential road in Echo Park. The Billets — military jargon for civilian quarters — has been a model.

The 72-bed program places as much as 70% of its chronically homeless veterans — male and female — in permanent housing, according to Volunteers of America, which operates the program. It's based in a tranquil, leafy and gentrifying neighborhood of families and young professionals a short walk from a doughnut shop, a grocery store and multiple bus lines.

But on Monday, the U.S. Department of Veterans Affairs is closing the Billets for good.

Volunteers of America officials said the VA gave no real reason for the decision, and Nikki T. Baker, department spokeswoman at the VA Greater Los Angeles Healthcare System, declined a request to interview Director Ann Brown or another administrator.

Baker told The Times that the program was ending because there were better applicants for the grant of $1 million a year. She said she could not release the list of applicants or the chosen recipient until June.

“Other applicants were better able to meet VA's funding criteria, which is designed to ensure resources are utilized in the most efficient manner possible,” Baker said in a statement.

Volunteers of America has slowly been moving Billets residents into other housing, including the 500-bed shelter in Bell. But those facilities are unlikely to match the benefits of the Echo Park program, participants said.

Jeff Petrie, 51, a Navy veteran and former museum fundraiser, said he got a part-time job in the neighborhood and had begun volunteering at the Petersen Automotive Museum.

“Here, you have one roommate and we're all bonded because we're all military,” said Petrie, who suffers from post-traumatic stress disorder, largely from his experiences being a gay serviceman when it was forbidden. “To be on a beautiful campus has given me a take-off platform so much higher” than the three-hots-and-a-cot shelter in Atlanta that he once called home.

The Billets has used a harm-reduction model for its services; some clients actively struggle with drug or alcohol problems. Volunteers of America's Calhoun said that because the program is comprehensive — offering intensive case management and help finding housing or applying for benefits — it has been especially effective with veterans who had “hits and misses” with past services.

“It's a one-stop shop. They can get all their needs met,” said Taneisha Antoine, clinical program manager at the Billets.

Over the years, neighbors of the Billets have complained of carousing, drug paraphernalia, profanity and a glut of parked cars — all as Echo Park has been transitioning from a bohemian enclave into a neighborhood of multimillion-dollar real estate.

But an executive at Gateways Hospital, the program's landlord, said Volunteers of America had worked things out with neighboring residents. The hospital was trying to extend the Billets lease when the VA pulled out with no explanation, Chief Operating Officer Phil Wong said.

Reginald Pippin said that he spent two years in a veterans program in Hollywood after finishing film school but that his “issues weren't deeply addressed” until he arrived at the Billets.

“It's a good area; it's easy to walk about,” said the 37-year-old Iraq war veteran, who took up art through a therapy class. “I find myself drawn to museums. I'm learning how to shade.”

Petrie said the shady courtyard of the Billets and the beauty of the surrounding neighborhood, which includes Elysian and Echo parks and views of the downtown skyline and Hollywood sign, were healing. On Friday, he moved into a 10-foot-by-6-foot cubicle in a dorm-style shelter at PATH homeless services agency. The building is in an East Hollywood neighborhood packed with homeless camps.

“I know it's weird for a 51-year old Naval Academy graduate to say, but it's a scary day. I understand there are veterans here, but I haven't met any yet,” Petrie said. “I knew I had it good. Now I really know I had it good.”