How Spending Time with Veterans Brought Me Back to Life

As I received my cap and gown from the book store clerk, I looked at the baby blue gown and... 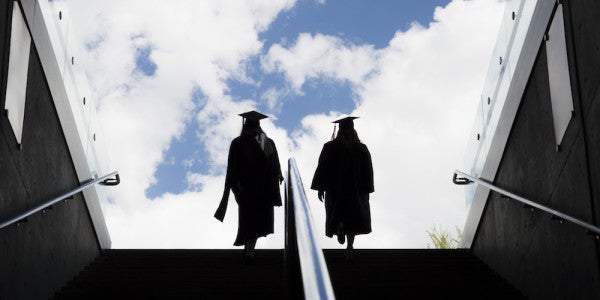 As I received my cap and gown from the book store clerk, I looked at the baby blue gown and dark blue tassel package in my hands and imagined walking on the grass alongside my classmates under the sun. I thought about what I will wear, how I will do my makeup, and how the graduation ceremony will end with happy tears, selfies, and family photos.

This will be our Ivy League moment, and we cannot wait to experience it.

It’s an exciting and scary time. I am about to receive my master’s degree, awaiting news on internships I applied for, and wondering where I’ll move my suitcases, boxes, and hopefully, my two cats after graduation. I’m stressed and scared, but in a good way.

I also thought about how I mentally and emotionally got here. School was hard, but harder when you are going through some things.

My journey began on a dark road during the last few months of my active duty service in the Marine Corps. I was diagnosed with severe depression and anxiety. Thus, I went to medical about once a week to get it in check.

I once thought I would be a lifer, but my last year in the service was a disaster, suffering under the leadership of a toxic and manipulative staff NCO. I could not wait to get out, and I thought life would improve immediately once I received my discharged papers. I assumed my depression and anxiety would disappear as soon as I got back to Texas because I would be with my family, and I would start attending school to finally earn my degree, and pursue my writing and journalism career.

Surprise! It didn’t happen that way, at least not the way I hoped. My depression and anxiety remained, which didn’t make my transition back to the civilian world any easier. I slept a lot, I was constantly angry, and fought daily with my sister who I was living with. She and my father remarked I was not the same person anymore. “You don’t laugh like you used to,” my dad said.

I knew I was not in the best mindset, but I wanted to work through it without the intervention of pills, therapy, and the VA.

After an almost attempt to take my own life, and three or four days at the VA hospital, I still felt low. My heart felt heavy for about a week, and I was always on the verge of tears whenever I thought about what could have happened, and the people I lost touch with after.

I didn’t think I would ever be happy again.

Shortly after my hospital stay, I returned to school and seeking familiarity, went to the veteran service office to study. I ended up talking to other student veterans and the program coordinator.

I mentioned my hospital stay and gave a vague reason as to why. I didn’t want to give too much away, for I still felt ashamed, and the Marine in me didn’t want to let anybody think I was weak.

Then one veteran said, “The sixth floor? I’ve been there.”

It was all it took for me to open up. From then on, I held on to this office and the people involved, helping and organizing any way I could.

In addition to work study at the veteran services office and cofounding the Student Veterans of America chapter, I was a staff writer and news editor for the college newspaper.

I must admit, I spent more time with my veteran activities than I did with journalism. At times, I wondered, had I spent equal amounts of time or more on the journalism and school paper side, would I have been hired straight out of college?

It wasn’t until I was in graduate school and had a deep conversation with a classmate about my struggles during and after the military that I realized why I spent so much time on the student veteran side.

I needed to heal.

Along with medication and biweekly counseling, the veteran office and the SVA chapter helped me get on the path of healing, because I was surrounded by vets who went through the same thing. We understood each other; the jokes, the lingo, the VA horror stories. Being involved in the veteran community let me know I was not alone in my suffering. I couldn’t do that with the college newspaper staff.

And it was because of that healing that I was able to pursue Columbia, live in New York City, and not give up on my journalistic dreams.

My time at Columbia is almost complete, but I have not been able to play or volunteer with the NY and Columbia veterans like I originally planned before I arrived. With an intense curriculum like Columbia’s, I don’t even have time to speak with the vets in the journalism program. I’m always working on an assignment to meet the deadline, or I’m exhausted from a day of reporting and shooting video.

But that’s a good thing, because now I am able to focus on journalism, and interact with other journalism students. If it weren’t for the veteran activities back home, I would not have been able to move on and spend the time I needed with journalism. I would not have been able to walk the streets of New York and speak and meet with people whose stories were hidden like a needle in a haystack of this huge city. Now I am more at ease.

It’s why I was able to open up to my classmates about my experience, and be vulnerable for once.

Unfortunately, I did not leave on good terms with the school’s veteran office back in Texas (that’s a story for another day), but perhaps that was a good thing. I needed to break free and move beyond the military and veteran life.

After all, I still wanted to be a journalist. I just had to find a way to get there.

Sara Samora served in the Marine Corps from 2009 to 2013. She will graduate soon with a master’s degree from Columbia Journalism School.