On July 22, I ended my active-duty service with the Marine Corps and started a 100-day run across the country.... 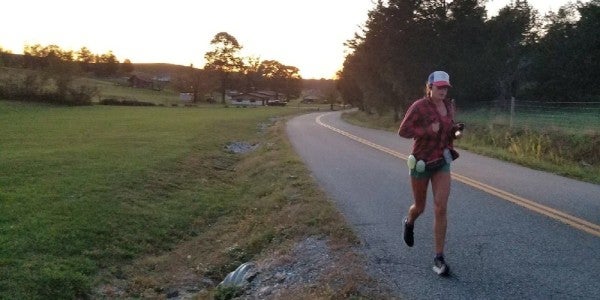 On July 22, I ended my active-duty service with the Marine Corps and started a 100-day run across the country. I decided to leave the Corps for a variety of reasons; some cultural, some personal, but mostly because I didn’t want to move every three years. I was tired of rebuilding a life and community with every PCS. In that same sense of community and service, I wanted my last PCS to be a tribute to the communities that had embraced me over my time on active duty. I set out to raise $50,000 for veterans, special-needs athletes, and Gold Star families.

Going into this run, I was woefully under trained, slightly overweight, and more than a little arrogant — not unlike many service members transitioning to civilian life. So it was to even my own surprise that on Oct. 28, I reached the Atlantic Ocean, relatively injury-free and on schedule.

It has been a month since I finished and I am still not sure how I did it, but I have a feeling it was through a little bit of luck, a lot of stubbornness, and my military training. As it turns out, the Marine Corps did a pretty good job in preparing me for that grueling 2,850-mile trek.

I called it grace, but bearing would be appropriate, too. The Marine Corps teaches bearing in any number of ways. I learned to keep a straight face and cool head mostly by counseling Marines through some notoriously bad decisions, like the time my chief intentionally impregnated his mistress, while still married. Or when that same chief held a “commitment ceremony” with his pregnant girlfriend, again while still married. Overcoming those experiences prevented me from completely losing my shit when on Day 64 of this run, my support driver drove to the day’s end point instead of the start point, wasting an hour of the blessed cool morning air. It allowed me to stay in control when that sweet old lady in Virginia hit me with her car. There is a strength in being able to remain calm, especially when everything around (or inside you) is going apeshit.

Pick a cliché: Go for the 80% solution. Semper Gumby. No plan survives first contact with the enemy. They all mean the same thing: The Marine Corps changes. A lot. Orders get modified hours before the movers show up. The movers don’t show up. The movers show up drunk. All of these changes force us to learn how to flex. I started the run in July and reached the California desert by the second day, unprepared to face the searing heat that even most American tourists know to steer clear of — clearly understanding weather isn’t my forte. In the desert, everything is trying to kill you: the sun, the sand, the animals, even the plants (jumping chollas, anyone?). My enemy became the rocks and sand, the goat trails and wadis, my blisters, and always my own mind. So, my crew and I flexed. I began running at night to avoid the heat of the day. We adjusted the route to make the timeline. My crew bought safety vests, cooling towels, and a second cooler. When one route didn’t pan out, we found another. When the van needed a repair, we called friends. When we hit a fence, a mounter, or a herd of cattle — we went over, around, or under it.

As if running in the desert in the dead of the night wasn’t bad enough, the desert between eastern California and Phoenix has very few roads suitable or legal for pedestrians. In some stretches of the trek, there were no viable roads at all. Luckily my crew and I know how to read a map and use a compass (or rather the compass app on the iPhone) and picked our way across the desert, avoiding becoming those lost lieutenants, or in this case lost captains. Thanks to The Basic School.

The ability to suffer monotony

At the end of each day, my crew would congratulate me on another day down. I’d bitterly ask what my reward was. Cheerfully, they would reply, “You get to do it again tomorrow!” Running 33 miles a day for 99 days was my own personal Groundhog Day from Hell. It reminded me a lot of deployments; the days were long, but the weeks were short, no matter how miserably monotonous. Every Marine — from a staff officer preparing commander’s update brief slides and non-judicial punishments to the infantry lance corporal cleaning his weapon — knows the feeling. The level of tedium experienced day after day in the Marines kills motivation and feeds misery. Luckily the Corps gives you company in your suffering. Shared torment reminds you that you’re not alone and that someone always had it worse. When the monotony of the run became nearly unbearable, I always had a friend to reach out to — someone who reminded me that it could be worse.

Success is a team effort

When the 1995 VW Eurovan camper named Diana that was meant to carry my support driver, running partners, me, and my gear broke down the day before the launch of the run, I started to panic. Luckily my friends — also Marines — stepped in. One friend lent me a Jeep. Another called a tow truck so that Diana could make the launch party. Other friends transferred my coolers and running gear from the van to the loaner Jeep and kept me calm. Throughout the run, this teamwork was a running (pun intended) theme. My crew made me weird potato-chip sandwiches, ran my ice baths, and even rubbed my feet. Friends from afar sent me messages, linked me up with places to stay at different stops of the journey, and spread the word about my mission. Everyone chipped in with whatever support they could. I got through this run the same way I got through any tough challenge in the Marine Corps. I asked for help. I asked for a lot of help, from a lot of different people. I reached out to those people who knew what they were doing, I reached out for logistical support, emotional support, medical advice, or just simple encouragement.

Maggie Seymour is a captain in the Marine Corps Reserves and a current doctoral candidate at Old Dominion University. After leaving active duty in 2017, she ran across the country in 100 days to support veterans, Gold Star families, and special-needs athletes.