UPDATE: This story was updated on March 12 to include a statement from Raheel Siddiqui's family. The highest-ranking Marine to... 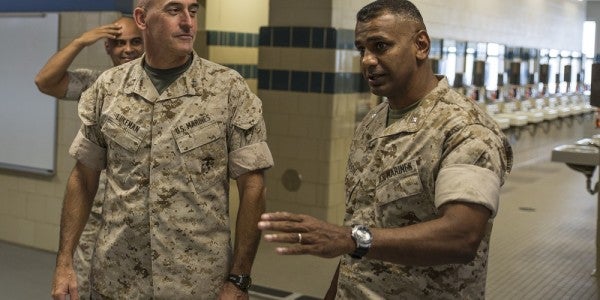 UPDATE: This story was updated on March 12 to include a statement from Raheel Siddiqui's family.

The highest-ranking Marine to face a court-martial in connection with hazing and abuse at Parris Island has pleaded guilty to dereliction of duty and related offenses, according to media reports, a landmark case that signals the Corps will punish senior leaders who condone the brutal initiation rites and bullying that have persisted for decades.

Lt. Col. Joshua Kissoon will receive a reprimand and see his pay docked $1,000 a month for five months, Marine Corps Times reported Monday. Kissoon has requested to retire as part of a plea agreement reached with prosecutors.

Parris Island has been under a cloud of suspicion since a recruit died there in March 2016, revealing widespread abuse of recruits and junior drill instructors. A Michigan lawmaker demanded an investigation after another Parris Island recruit died that November. It was later determined he succumbed to pneumonia. A third recruit was critically injured when he jumped from the second story of a building in October 2016.

The fact that the Marine Corps is punishing a former training battalion commander at Parris Island for failing to stop hazing sends a message to everyone involved with recruit training, said retired Marine Lt. Col. Gary Solis, a former military lawyer and judge.

“Military justice serves two purposes – not only an effort to achieve justice but an effort to enhance discipline,” Solis told Task & Purpose on Monday. “Everybody, certainly, at the recruit depots are going to take notice to what happened to this battalion commander and pay a little more attention to how they command their troops – as they should.”

Kissoon likely pleaded guilty because he felt that the prosecution had a strong case against him and military judges tend to grant more leniency to troops who plead guilty than to service members convicted after a contested trial, Solis said.

His punishment will serve to remind other battalion commanders in charge of training recruits that hazing is not tolerated, Solis said.

“It’s going to be some time now before lieutenant colonels forget: ‘Whoa, look what happened to this guy. I better be down there making a few inspection tours of my own and showing up at reveille – and most of all, if I’m told this guy should not be sent back to train recruits, I’m going to obey that order,’” Solis said.

Kissoon was fired as commander of the 3rd Recruit Training Battalion on March 31, 2016 and later charged with his actions that helped Gunnery Sgt. Joseph Felix return to drill instructor duty while Felix was under investigation for ordering a Muslim recruit to sit inside a commercial dryer, which was turned on three times.

In November, a military jury sentenced Felix to 10 years in prison for abusing recruits, one of whom died after Felix resumed drill instructor duties. Raheel Siddiqui, who was in Felix’s platoon, suffered from a sore throat so severe that he could not utter the greeting of the day on March 18, 2016, prompting Felix to make him run to one end of the squad bay and back until he collapsed. Felix slapped Siddiqui while on the ground, and Siddiqui ran to a stairwell and leapt nearly 40 feet to his death.

Even though Felix was not charged with manslaughter, his lengthy prison sentence suggests military jurors decided to punish him for Siddiqui’s death, said Daniel Conway, a civilian military lawyer and former Marine captain.

Kissoon’s defense likely calculated that a military jury would also be aggressive in sentencing if he were found guilty, Conway told Task & Purpose. Also, the guilty plea saves both Kissoon and the Marine Corps from all the bad press that would come from a lengthy trial.

Conway believes it is significant that the Marine Corps decided to charge an officer as high ranking as Kissoon in connection with hazing at Parris Island.

But Siddiqui’s family, which is suing the U.S. government for $100 million, issued a statement on Monday saying the courts-martial of Felix and Kissoon have not gone far enough.

“The Siddiqui family’s heartache is immeasurable, and they find no solace for a loss in one’s pay and rank to be compared with the loss of their son,” the family statement says. “However, the fact is, a guilty plea is a guilty plea, but it is absolutely necessary that the entirety of evidentiary truths be disclosed.”

In the lawsuit, Siddiqui family attorney Shiraz Khan disputes that Siddiqui committed suicide and raises the possibility that he suffered other injuries that were not caused by falling down the stairwell. At Felix court-martial, the military judge told jurors they could recognize that Siddiqui was dead and could not testify, but they could “draw no conclusions” from those facts,

“It is our understanding and as reported, the details and manner of Raheel Siddiqui’s death were not even mentioned in this matter or in the military court martial involving Sgt. Felix,” the Siddiqui family statement says. “Nevertheless, although we will not comment on matters pending in court, or any that may arise, we will allow our submission to stand on its own merit.”