USMC Recruit Had To Get Skin Grafts After Hazing Incident

A Marine Corps recruit hazed by his Parris Island drill instructor suffered chemical burns so severe that he required skin... 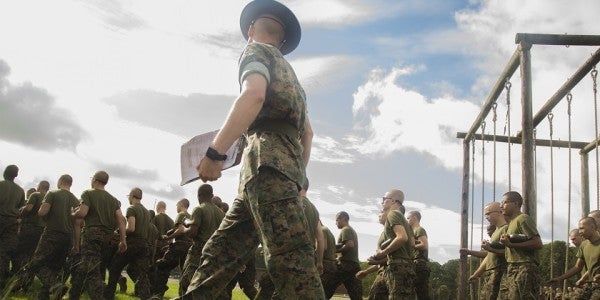 The injuries occurred in December 2012 at Recruit Depot Parris Island, South Carolina, when the recruit was ordered by his drill instructor “to perform unauthorized exercises under an upside-down laundry bin on a floor covered in bleach and required to stay in his wet pants for hours,” according to the Post. The severity of the incident came to light after Lamothe received documentation about the case from the Marine Corps as part of a larger Freedom of Information Act request on hazing incidents in the service.

When your experience at Marine Corps boot camp leads to skin grafts. An excerpt from the #FOIA docs I received. https://t.co/srJIFLJ9t4 pic.twitter.com/eLLnl0vOsu

The drill instructor, Sgt. Jeffrey VanDyke was convicted in 2014 on “numerous allegations of cruelty and maltreatment, assault and failure to obey a lawful order in the case,” Lamothe writes. VanDyke has been accused by other recruits and even drill instructors of abusing would-be Marines; prior to his conviction, VanDyke was ordered to stand down from training recruits for three days after he grabbed a recruit by the throat, according to the Post.

Related: It Will Take More Than Increased Supervision To Fix Hazing At Marine Boot Camp »

The recruit, whose name was withheld from the report, was required to stay in his wet clothes for hours before he told another drill instructor about his burns. As his condition worsened, he had little choice but to drop out of training to seek help:

“The burned recruit did everything he could to continue training, applying burn cream repeatedly even as he performed exercises and went to the rifle range. Eventually, the pain was too much and received treatment from doctors on base and nearby hospitals.”

The recruit received skin grafts to his buttocks from pig and cadaver skin at an undisclosed burn center in nearby Charleston, according to internal documents. But the injury worsened, from second- to third-degree chemical burns. The recruit was told by medical authorities that “his skin had been liquefied by the bleach,” and he was sent for more possible skin grafts later that month.

The Post requested the documents in response to a hazing scandal that broke publicly following the death of Pvt. Raheel Siddiqui, a Marine recruit who fell 40 feet over a railing following physical abuse at the hands of his drill instructor. In the wake of Siddiqui’s death and a subsequent investigation by the Marine Corps, new details relating to other hazing incidents have emerged and generated heated debate among Marines and veterans about the role of hazing in recruit training.

Tweets like this were inevitable. Even when a recruit needs skin grafts and did everything he could to graduate with his boot camp platoon. https://t.co/8nG44NPx3f

As for the recruit, the hazing incident was a “black stain” on his career, he told a Naval Criminal Investigative Service agent.

The reason, he said, was that by seeking medical attention and speaking up, he got his drill instructor in trouble.