Marines Have Been Quietly Operating In ‘Hot Spots’ In Iraq

Elements of a nine-month Middle East crisis response task force deployment that ended in December were dispatched on “specialized missions... 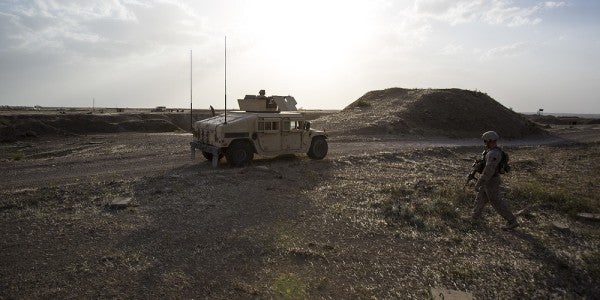 Elements of a nine-month Middle East crisis response task force deployment that ended in December were dispatched on “specialized missions in Iraq,” and one such mission, known as Task Force Whiskey, called for a company-size unit of Marines to insert near Erbil — 50 miles southeast of Mosul — according to Military.com’s Hope Hodge Seck, who first reported on this story.

“We were the only one that could respond to it quickly enough to get forces into country, up near Erbil, to conduct that mission,” Lt. Col. John Bossie, the task force operations officer, told Military.com.

Though details on the mission remain under wraps, it was described as being reconnaissance in nature and lasted between 90 and 100 days, reports Military.com.

The small-scale, in-and-out deployments of Marines to contentious areas of Iraq “may demonstrate a growing willingness of regional commanders to exploit the flexibility and availability of the task force in innovative ways,” Seck writes.

The Marine’s Middle East task force was also called upon to create exploitation and analysis cells, comprised of military police and law enforcement Marines who were responsible for confiscating and processing information left behind by Islamic State militants.

“As the clearance of Fallujah happened, a bunch of ISIS convoys were leaving Fallujah, and coalition forces struck the convoys as they were leaving,” Bossie told Military.com. “We were able to use our human intelligence Marines as well as this exploitation-analysis cell to collect thumb drives and hard drives that came out of those convoys.”

The information gained from that one convoy strike — 80 gigabytes of data — amounts to roughly 800,000 documents. The Task Force Marines were also tapped to support advise and assist operations for the 15th Iraqi Army Division, as they staged at the Qayyarah West airfield ahead of the push to enter Mosul, according to Military.com.