‘Be bold, be brief, be gone’ — The enduring legacy of the first female Marine officer killed in the Iraq War

"As a Marine, Megan was the kind of person that you want on your flank" 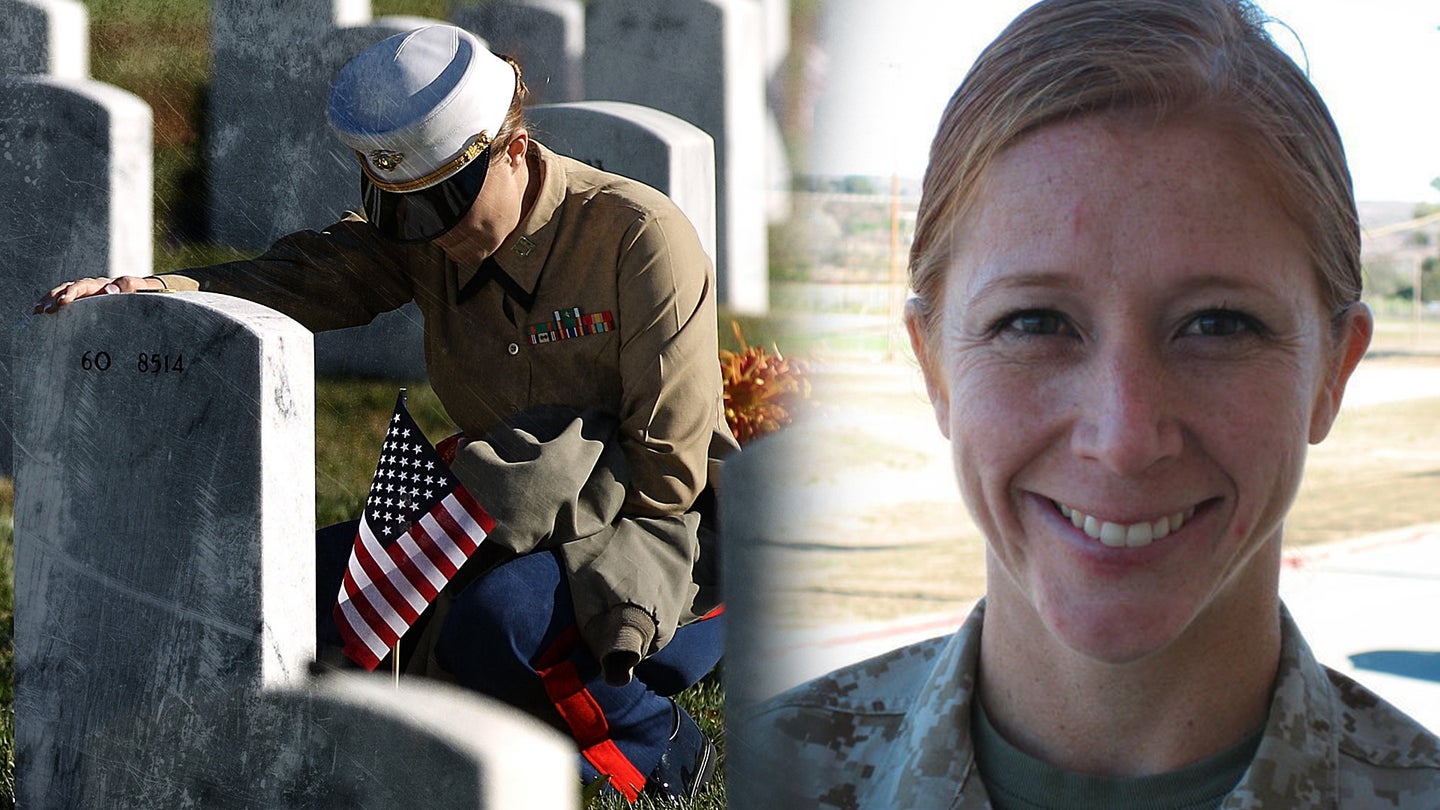 Maj. Megan McClung was a standout Marine in every way and a legendary military spokeswoman who continues to inspire public affairs officers long after her death.

McClung was killed on Dec. 6, 2006, in Ramadi, Iraq, when a roadside bomb destroyed the Humvee she was traveling in. She was the first female Marine officer to be killed in the Iraq war and the first woman who graduated the U.S. Naval Academy to die in combat.

A gifted communicator, her advice to troops and senior military leaders about how to engage with reporters was succinct: “Be Bold. Be Brief. Be Gone.” Those words are now engraved on her headstone.

She was committed to allowing journalists to tell the stories of soldiers and Marines in western Iraq, which was one of the deadliest places for U.S. troops in 2006. On the day she was killed, McClung was escorting a Fox News crew and a Newsweek reporter. Retired Marine Lt. Col. Oliver North, a Fox host at the time, recalled his last interaction with McClung in a Dec. 8, 2006 column. North did not include her name because she had not been publicly identified yet.

“’If everything went as planned, they wouldn’t call it ‘war,’” North wrote. “That was the tongue-in-cheek assessment of a U.S. Marine Major as to why our helicopter flight from Baghdad to Ramadi had been delayed for half a day. By the time we arrived on the LZ at this outpost of freedom it was the middle of an unusually cold, damp night. A proffered hot cup of coffee was gratefully accepted as the Major helped us load our backpacks, camera gear and satellite broadcast equipment aboard a dust-encrusted Humvee. Just hours later, this widely respected and much admired Marine officer and two brave U.S. Army soldiers were dead, killed by an IED – an improvised explosive device – the insidious weapon of choice for terrorists in Iraq.”

Even though she was a Marine officer, McClung became the spokeswoman for the Army’s 1st Brigade Combat Team, 1st Armored Division – known as the Ready First Brigade. That unit had just lost its public affairs officer due to an “administrative event” and asked the Marine command in Western Iraq for a replacement, said retired Col. Bryan Salas, who was McClung’s superior at the time.

Since McClung was the media officer for all the U.S. forces in Anbar province, Iraq, she had a good understanding of the situation in Ramadi and the people she would be working with, Salas told Task & Purpose.

“Megan was perfect,” Salas said. “She was just selected for major, and she was ready to go. And so, I knew that the general – [Maj. Gen. Richard Zilmer] – was going to Ramadi in like 40 minutes. So, I told her: Hey, you’re going to Ramadi in 40 minutes to replace the public affairs officer there. She said: ‘Awesome!’ And so, she grabbed everything she could carry – she said she’d be back for the rest of it – and jumped on the helicopter with Gen. Zilmer and worked with the team.”

Retired Marine Col. John Church was serving as a civil affairs officer in Ramadi when McClung arrived as the new spokeswoman for the brigade. In addition to being a stellar officer, McClung also believed the U.S. military needed to engage with the American and international press, he said.

“She would tell unbelievers: ‘Hey, you don’t get it: We need public support for this mission. The way to get public support is to be transparent as much as possible and make the public aware of the successes that we’re enjoying here during the Al Anbar Awakening,’” Church told Task & Purpose.

Army Capt. Travis Patriquin, the brigade’s civil affairs adviser at the time, was espousing a new approach to dealing with tribal leaders in Anbar province, who had been disempowered after the U.S.-led invasion of Iraq by the Coalition Provisional Authority. He helped to set in motion the radical rethinking of the U.S. military’s strategy in Iraq, which combined with the 2007 troop surge, turned Sunni tribal leaders in western Iraq against Al Qaeda.

McClung understood and embraced Patriquin’s viewpoint, Church said.  “She knew that Travis was making a difference at the tactical and strategic level, and she wanted to learn more about that so she could explain it to members of the media and say: ‘Hey, this is what we’re doing; this is how and why it’s working,” he said.

She and Patriquin were killed in the same roadside bomb blast along with Army Spc. Vincent Pomante III, who was the gunner in the Humvee. All told, the brigade lost a total of six service members that day, said retired Army Lt. Gen. Sean MacFarland, who led the Ready First Brigade at the time.

“A number of sheikhs attended the memorial service that we had in Ramadi, which is a bit unusual, but that showed how affected they were by the loss of both her and Travis,” MacFarland told Task & Purpose.

MacFarland also remembered how Marines from an Air Naval Gunfire Liaison Company also attended the memorial service. They were led by a large and muscular Marine major.

“After the ceremony, we were walking by him and he was tearing up and I put my hand on his shoulder and he just kind of melted into tears and leaned up against me,” MacFarland said. “I was a little concerned if I’d be able to bear up under all his weight. But to see a big, tough Marine like that just dissolve into tears kind of shows what a big impact she had across the brigade. She was just a wonderful, bright personality and always cheerful.”

This Memorial Day, MacFarland will speak at the Mt. Soledad National Veterans Memorial in San Diego, where a plaque in McClung’s honor will be dedicated. He said he looks forward to seeing her family again and telling them what an amazing person she was and how she is still missed.

Through her life and her legacy, McClung showed that all Marines are part of the fight, said Col. Riccoh Player, who served with McClung as a public affairs officer in Iraq’s Anbar province

“There’s no forward edge of the battlefield – everything is the battlefield,” said Player, who is currently the commanding officer of the headquarters and service battalion at Marine Corps Recruit Depot Parris Island, South Carolina. “Megan’s sacrifice, I think, is a testament and a testimony to that. And I take it personal, and I ensure that whenever possible and appropriate that I continue to echo her legacy and explain the relationship that we had as friends and to ensure that her sacrifice is not forgotten.”

After McClung’s death, Player became the spokesman for the Ready First Brigade. He stressed that he did not replace McClung as the brigade’s public affairs officer because “no one can replace her.”

One of his first tasks was to organize McClung’s memorial service. “It was probably some of the heaviest mental lifting and emotional calibration that I personally had to do in mourning the loss of my good friend and at the same time continuing the mission of telling the story for the Ready First Army unit and the mission of the Marine Corps,” Player told Task & Purpose.

Player had first met McClung when they both attended the Defense Information School at Fort Meade, Maryland. When they later deployed to Iraq, she was personally selected to go to Ramadi because of her intense work ethic.

“As a Marine, Megan was the kind of person that you want on your flank, that you want in front of you or that you want behind you,” Player said., “It didn’t matter what the mission was: Megan was all about taking care of the folks around her – Marines, sailors, civilians – and getting the job done.”

“We referred to her as a fire-and-forget weapon: What was the mission; what needs to be accomplished; give it to Megan and then move on to the next thing, because by giving it to her, you were guaranteed to ensure that the mission was going to be accomplished,” he continued.

McClung was also an avid runner, who organized the Marine Corps Marathon Forward held at Al Asad, Iraq in October 2006. In addition to serving as the race director, McClung came in second among the women runners even though she had an injury at the time.

Player recalled how McClung would run 5 miles with him and then take off for her real run. “She was running just to humor me as a warmup,” he said. “She was that kind of person: Never putting my face in the dirt or rubbing it in my face how much better she was. But she just wanted the camaraderie of being out in the sand, talking officer talk and just fellowshipping – and then go put in her real miles at a much higher speed than the pace we were keeping.”

Former Marine Corps Commandant Gen. Robert Neller was serving as a commander in western Iraq while McClung was in Ramadi. He said he admired her being “a very powerful personality and strong person.”

The day that McClung, Patriquin, and Pomante were killed was especially tough, Neller recalled. “We thought we were finally starting to make some success and then we lost those three – but for the Marines, it was really tough to lose Megan.”

When he was commandant, Neller would often cite McClung as an example about how women in the military have long been in combat even though certain military occupational specialties were closed to them at the time.

“Women have been in combat since the beginning of our nation – not necessarily in what you would consider in ground combat roles – but over time more and more of them have served and history has got examples of that, whether they be medical people or women that fought because they wanted to fight alongside others,” Neller said. “I could go on.”

McClung worked tirelessly to let Americans know what their sons and daughters were doing in Iraq. She will always be remembered for being bold and brief – and though she is gone, her legacy endures.