What The Hell Are Afghan Army Pickup Trucks Doing In Iraq?

When you spend enough time in Iraq and Afghanistan, the scenery starts to overlap, and you can forget which theater... 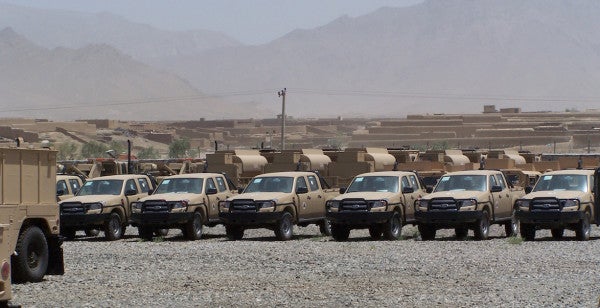 When you spend enough time in Iraq and Afghanistan, the scenery starts to overlap, and you can forget which theater you’re currently in. Especially when the Danger Rangers all start to look the same. That was the feeling freelance reporter Courtney Body got Wednesday, when she spotted something in Iraq that didn’t want quite belong.

Body was stopped at an Iraqi checkpoint traveling toward Mosul on May 10, when a Ford Ranger in a passing convoy caught her attention: The insignia on the pickup truck wasn’t for Iraqi security forces… but for the Afghan National Army.

“It's so familiar to me after all those years in Afghanistan to see the ANA Ford Ranger, and because I was intently looking at the MRAPs, I just caught it,” Body told Task & Purpose. “It was definitely a moment where I had to remind myself where I was, and question how in the world that vehicle ended up outside of Mosul in Iraq.”

Body spent six and a half years in Afghanistan covering the war and recognized the green, red, and black emblem immediately. It’s plastered all over Afghan army posters, equipment, vehicles, and soldiers around the country. Here it is up close:

The truck was passing through the checkpoint along with two MRAPs, according to Body. It pulled over and she was able to snap a photo of its passengers, who were donning Iraqi army uniforms. There was also a woman in the backseat. Other than the Afghan army sticker on the truck, Body said the convoy had no identifying markings, so there’s no confirmation that it was an official vehicle of Iraqi security forces.

So, how the hell did it get there? And why? Body was unsure, but has heard rumors of Afghan army trucks spotted elsewhere in Iraq. Task & Purpose reached out to Program Executive Office Combat Support and Combat Service Support, the U.S. Army office that equipped the Afghan security forces with the Ford Rangers, to determine if any Ford Rangers were intentionally redirected to Iraq.

“The U.S. Army facilitated the procurement and delivery of thousands of Ford Ranger trucks to the Afghan National Army and Afghan National Police, concluding in 2012,” said Michael D. Clow, a spokesman for the office, in an email to Task & Purpose. “The managing program office has not facilitated the transfer of any vehicles out of Afghanistan, and we cannot speculate on the origin or disposition of the truck in the image.”

So, there goes that theory.

For those of you who never have had the pleasure of traversing this part of world, here’s a map pinpointing Mosul in relation to Afghanistan. There’s pretty much only one way to get there: via Iran.

The Ford Ranger pickups are routinely used by the Afghan security forces to truck police and soldiers around Afghanistan. According to a U.S. Army press release, 31,000 light pickup trucks, acquired through an authorized dealer of Ford called Global Fleet Sales, were fielded to the Afghan army and police in 2011. An additional 10,000 were scheduled to be fielded by 2012.

Here’s a photo of ANA Ford Ranger in its normal setting.

An ANA truck conquers a small mountain during a route recon patrol through the hills of Farah province, Afghanistan.DoD photo

If you’ve spent time in Iraq and have seen Afghan National Army or police trucks there — or have any info on how they got there — shoot us an email at editor@taskandpurpose.com.