Anti-government protests in Kabul turned violent on June 2, two days after a sewage truck packed with explosives detonated and... 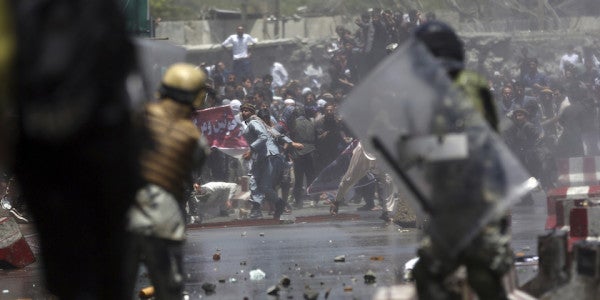 Anti-government protests in Kabul turned violent on June 2, two days after a sewage truck packed with explosives detonated and killed at least 90 people and injured hundreds more in the capital city in one of the deadliest terrorist attacks in the Afghanistan since the 2001 U.S.-led invasion, Stars and Stripes reports.

More than 1,000 protesters, many armed with rocks, descended the country’s heavily fortified hub of government and the command center for international forces, to demand justice for the victims of the bombing. The protesters are reportedly calling for the resignation of Afghan President Ashraf Ghani and Chief Executive Abdullah Abdullah, whom they blame for lack of security.

While the blast also damaged many government and diplomatic buildings, the majority of the people killed in the bombing were Afghan civilians. Among the dead were several Afghan security guards stationed at the U.S. Embassy; 11 American contractors were also wounded, according to the Associated Press.

Afghan riot police equipped with body armor and shields were deployed to quell the protests, firing shots into the air and lobbing tear gas grenades at the crowd as it moved closer to the enormous blast crater, which is near the presidential palace. A running battle ensued. The chaotic scene was broadcast live on Afghan television.

The Associated Press reports that several people were killed or injured, while the Afghan Deputy Interior Minister Gen. Murad Ali Murad told Stars and Stripes that both the protesters and the police suffered casualties, but did not provide numbers. He also suggested that militants had infiltrated the protests, saying, “Some people with guns who had their own goals were seen amongst the demonstrators.”

Neither the Taliban or ISIS have claimed responsibility for the bombing, which occurred on the morning of May 31. However, Afghanistan’s intelligence agency blamed the Haqqani network, an extreme offshoot of the Taliban suspected of being supported by Pakistan (Protesters also demanded that the government execute Haqqani network prisoners in retaliation for the bombing.)

“These professional terrorist have once again showed that they are not representatives of any religion and they commit such acts only to make their Pakistani masters happy,” the intelligence agency said in a statement following the attack.

The May 31 attack occurred as Ghani pursues a peace settlement with the Taliban. The insurgent group has seized control of huge swaths of the country since the the NATO combat mission officially ended there in late 2014, inflicting enormous casualties on government forces and reversing many of the battlefield gains made by NATO troops during the occupation.

Meanwhile, a branch of ISIS has taken root in eastern Afghanistan, along the border of Pakistan, where U.S. Special Operations forces have been waging a separate war to defeat the terrorist group. In April, a U.S. aircraft dropped a GBU-43/B, or MOAB, on an ISIS stronghold in Afghanistan’s Spin Ghar, killing 94 militants. Several days later, two U.S. Army Rangers were killed during a raid in the same area that also resulted in the death of the local ISIS commander.

The Trump administration is currently weighing the option of deploying several thousand more U.S. troops to Afghanistan to bolster the Afghan government’s fight against the Taliban, with the hope that increased pressure on the battlefield will force the insurgents to come to the negotiating table. That was the same goal of the Obama administration’s 2010 troop surge, which ultimately failed in that regard.

There are currently 8,400 American service members deployed to Afghanistan. NATO partners contribute 4,900 more. The bulk of the forces are focused on training and advising Afghan troops.

Ghani appeared on Afghan television after the May 31 bombing to reaffirm his commitment to reaching a peace settlement with the Taliban and urged the group to “end their fighting against the Afghan nation and solve disagreements through dialogue,” Stars and Stripes reports.

The bombing on May 31 marks the latest in a string of recent attacks on Kabul that have terrorized a city that once felt removed from the war, which for many years was largely fought in the country’s hinterlands. Last year, a insurgents assaulted the National Directorate of Security, killing 70 people and wounding 350 others. And in March, a raid carried out by ISIS militants on a military hospital in the city left 30 dead.