These Unusual Ships Could Carry Marines Around Australia And Africa 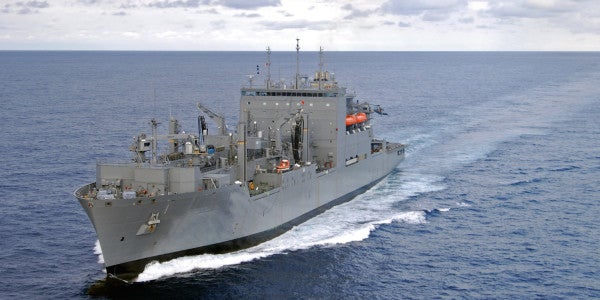 As Marines buckle down for another decade with limited amphibious ships and high operational demand, planners are taking a look at repurposing some ship classes and reconfiguring others in order to bridge the demand gap.

The Marines' rotational deployment to Darwin, Australia, continues to grow, with plans to build up to 2,500 Marines per six-month rotation. And the Marines' Europe-based crisis response task force for Africa — created because of the dearth of amphibious ships to respond in that part of the world — is increasingly participating in joint exercises and theater security cooperation efforts on both continents.

In the long-term, Marines plan to task a future amphibious group led by the America-class amphibious assault ship USS Tripoli, still under construction, with supporting two 90-day patrols around Australia per rotational deployment, Walsh told Military.com. That future ARG is expected to be based in San Diego and will support operations in the Pacific, including the Darwin troops.

“So it's trying to get [Marines] off Australia to be able to train in other areas because it's tied a lot to that wet season that they have out there,” Walsh said. “You put a [Marine air-ground task force] ashore, and … Marines need to be on ships. We go ashore when we need to be ashore, but we shouldn't design ourselves to be ashore.”

With the Tripoli slated for delivery to the Navy at the end of 2018, it could be the 2020s, however, before a Tripoli ARG is ready to deploy. Former chief of Naval Operations Adm. Jon Greenert last year mentioned the amphibious assault ship America, the first of its class, as a possible candidate for future Australia patrols. But USNI News reported in December, the ship may eventually be headed to Japan.

In the interim, Walsh said, and without a clear amphibious solution for the Africa crisis response force, Marines are examining new ways to use prepositioning and logistics ships to transport troops and aircraft. Maritime Prepositioning Squadrons 2 and 3, based out of Diego Garcia in the Indian Ocean and Guam-Saipan in the Western Pacific, contain 14 ships used in the past for exercises, humanitarian assistance missions and conventional operations. Now, planners are looking at ways to optimize them to carry Marines.

“Our LMSR not V-22 capable,” Walsh said. “But when you look at a ship with the amount of space it has to put Marines on there with a big flight deck on there, we need to get the capability to put V-22s on there and use it in different ways.”

Aviation logistics support (roll-on/roll-off) container ships (T-AVB), designed for aircraft maintenance, are also candidates to carry Marines, even though their design, with cranes at the center, is not optimized to land multiple aircraft.

“We're saying, 'well, you could do a little bit with it, but what if you moved the crane and I could land more aircraft.' Or, 'there's not enough berthing, so we want to put more berthing modules on there to increase capacity.' So those are the things we're looking at, is how to get more capability on them, would be one, but the first thing is how can we use them in the configuration we're in right now,” Walsh said. “Instead of just having them sitting in there, let's buy more steaming days, get them out there.”

Ideas to transport Marines around Europe and Africa are less developed.

“The Marine Corps is designed as a maritime force. We're Marines. We belong on ships,” he said. “So being able to have that is essential.”

Walsh said planners could consider moving part of a maritime prepositioning squadron from the Pacific to support task force operations, but orchestrating that through multiple geographic combatant commands might be challenging. Another option, he said, might be to pull Navy ships out of reserve operating status and task them to support these new mission sets.

“That costs some money to do, but that's another idea we're looking at,” he said.