Three deadly explosions rocked Brussels on March 22, killing at least 34 people and injuring more than 170, according to... 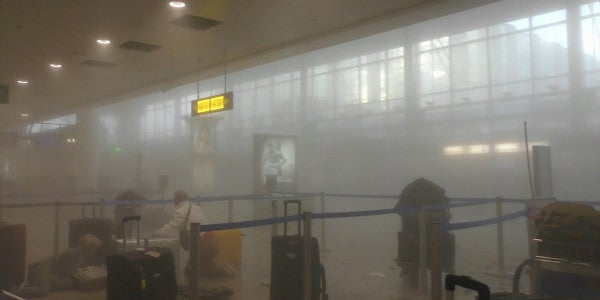 Three deadly explosions rocked Brussels on March 22, killing at least 34 people and injuring more than 170, according to Belgian media. As emergency responders continued to sift through the wreckage and tend to the wounded, Belgian authorities mobilized to hunt down those involved and anyone who might be preparing to stage additional attacks.

Meanwhile, supporters of the so-called Islamic State, which has claimed responsibility for the attacks, took to social media to celebrate the carnage and call for more. “With the permission of God, the lions came to take revenge for the killing of Muslims in Syria and Iraq,” one posted on a Twitter account that has since been suspended.

Two of the blasts occurred at the Brussels airport, while the other struck a heavily trafficked subway station in the center of the city. Belgian officials have confirmed that one of the explosions at the airport was the result of a suicide bomber.

The attacks occurred just four days after Salah Abdeslam, the sole survivor of the men responsible for the terrorist attacks on Nov. 13, 2015 that killed 130 in and around Paris, was captured in Brussels following a gunfight with French and Belgian authorities. The country has been bracing for a possible response from the Islamic State since.

“We were fearing terrorist attacks, and that has now happened,” Prime Minister Michel said at a news conference.

Here’s how other world leaders are responding to the attacks.

“I want to comment on the terrorist attacks that have taken place in Brussels. The thoughts and the prayers of the American people are with the people of Belgium. We stand in solidarity with them in condemning these outrageous attacks against innocent people. We will do whatever is necessary to support our friend and ally Belgium in bringing to justice those who are responsible. And this is yet another reminder that the world must unite. We must be together, regardless of nationality or race or faith, in fighting against the scourge of terrorism. We can and we will defeat those who threaten the safety and security of people all around the world.”

“The thoughts and prayers of the American people are with the people of Belgium” —@POTUS on the attacks in #Brusselshttps://t.co/TWxnIDfDqL

“I want to begin by condemning this morning’s bombings in Belgium. Today, our thoughts and prayers are with all of those affected by this tragedy — the victims, their families, and the survivors. And in the face of of these acts of terrorism, the United States stands strongly in solidarity with our ally Belgium.

We’re continuing to monitor the situation, including to ensure all U.S. personnel and citizens are accounted for. We also stand ready to provide assistance to our friends and allies in Europe as necessary.

Brussels is an international city that has been host to NATO and the EU for decades. Together, we must and we will continue to do everything we can to protect our homelands and defeat terrorists wherever they threaten us. No attack can shake our resolve to accelerate the defeat of ISIL.”

The United States stands with people of Belgium. We are ready to support the investigation as appropriate.

Lt. Col. David Westover, a spokesman for U.S. European Command, via to The Washington Examiner

“At the present time, we have accounted for all our U.S. military members who were in the region at the time of the attacks. … Additionally, we are working closely with our interagency partners and host nation counterparts to determine the appropriate steps to ensure the safety and security of all U.S. personnel.”

“On a final note, this morning we learned of more terrorist attacks in Europe. The Administration’s budget request asks for more money to use to fight ISIS in Iraq and Syria. That is understandable. What is not understandable is that the law required the Administration to provide a written document laying out its strategy to fight ISIS by February 15, 2016. We have received nothing and there is no indication that any such strategy is on its way.”

“I am deeply saddened by the attacks here in Brussels this morning. The heavy human toll is tragic.

My thoughts are with those who have lost their loved ones, with all those affected, and with the people of Belgium. We all stand together with our Ally Belgium on this dark day.

This is a cowardly attack. An attack on our values and on our open societies. Terrorism will not defeat democracy and take away our freedoms.

We have decided to increase the alert state at NATO Headquarters. We remain vigilant and continue to monitor the situation very closely.”

Donald Trump on Fox and Friends

“Worldwide, we have a situation that’s out of control.”

Our hearts break for the men and women of Brussels this morning. Make no mistake — these terror attacks are no isolated…

Terrorists have once again struck at the heart of Europe, but their campaign of hate and fear will not succeed. The…

“… we are at war. We have been subjected for the last few months in Europe to acts of war.”

“This is one continued assault on all of us … These terrorists have no resolvable grievances. It’s not as if we could offer them Brussels, or Istanbul, or California or even all of the West Bank.”

“Their basic demand is that we should simply disappear. Well, my friends, that’s not going to happen. The only way to defeat these terrorists is to join together and fight them together.”

“There could have just as well have been attacks in Britain, or France or Germany or elsewhere in Europe … Although they attack our way of life, and they attack us because of who we are, we will never let them win.”

The terrorists behind today’s atrocities attack our way of life and they attack us because of who we are. We will never let them win.

“I curse the attack in Brussels, which has once again shown the global face of terror.I offer my condolences to the government and the people of Belgium and I want to express solidarity on behalf of our people.”

“I invite all of humanity to stand united against global terror and any sort of terrorism.”

All solidarity now with EU, Belgium, #Brussels! Terrorists will never win: Our European values much stronger than hate, violence, terror!